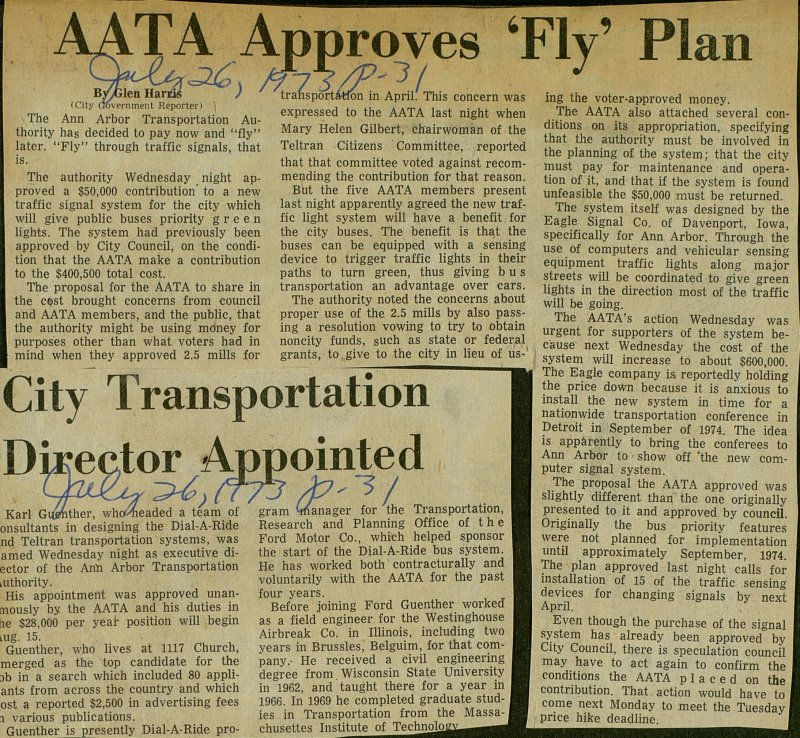 The Ann Arbor Transportation Authority has decided to pay now and "fly" later. "Fly" through traffic signáis, that is. The authority Wëdnesday night approved a $50,000 contribution" to a new traffic signal system for the city which will give public buses priority green lights. The system had previously been approved by City Council, on the condition that the AATA make a contribution to the $400,500 total cost. The proposal for the AATA to share in the eest brought concerns from council and AATA members, and the public, that the authority might be using money for purposes other than what voters had in mind when they approved 2.5 milis for transportación in April. This concern was expressed to the AATA last night when Mary Helen Gilbert, chairwoman of the Teltran Citizens Committee, reported that that committee voted against recommending the contribution for that reason. Büt the five AATA members present last night apparently agreed the new traffic light system will have a benefit for the city buses. The benefit is that the buses can be equipped with a sensing device to trigger traffic lights in their paths to turn green, thus giving bus transportaron an advantage over cars. The authority noted the concerns about proper use of the 2.5 milis by also passing a resolution vowing to try to obtain noncity funds, such as state or federal grants, to give to the city in lieu of us-1 ing the voter-approved money. The AATA also attached several conditions on its appropriation, specifying that the authority must be involved in the planning of the system ; that the city must pay for maintenance and operation of it, and that if the system is found unfeasible the $50,000 must be returned. The system itself was designed by the Eagle Signal Co. of Davenport, Iowa, specifically for Ann Arbor. Through the use of computers and vehicular sensing equipment traffic lights along major streets will be coordinated to give green lights in the direction most of the traffic will be going. The AATA's action Wednesday was urgent for supporters of the system because next Wednesday the cost of the system will increase to about $600,000. The Eagle company ia reportedly holding the price down because it is anxious to install the new system in time for a nationwide transportation conference in Detroit in September of 1974. The idea is apparently to bring the conferees to Ann Arbor to show off 'the new computer signal system. The proposal the AATA approved was slightly different than the one originally presented to it and approved by council. Originally the bus priority features were not planned for implementation until approximately September, 1974. The plan approved last night calis for installation of 15 of the traffic sensing devices for changing signáis by next April. Even though the purchase of the signal system has already been approved by City Council, there is speculation council may have to act again to confirm the conditions the AATA placed on the I contribution. That action would have to come next Monday to meet the Tuesday I price hike deadline.