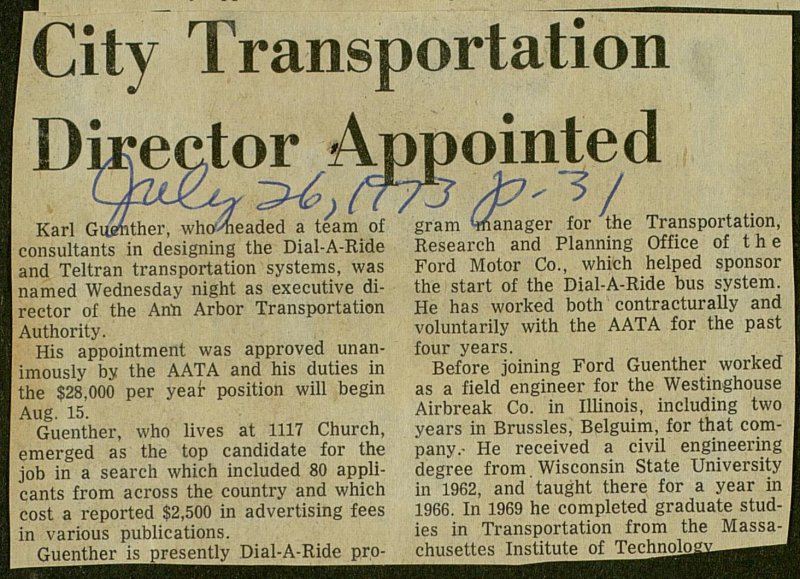 Karl Guenther, who'-'rieaded a team of consultants in designing the Dial-A-Ride and Teltran transportation systems, was I named Wednesday night as executive director of the Anti Arbor Transportation Authority. His appointment was approved unanimously by the AATA and his duties in the $28,000 per year position will begin Aug. 15. Guenther, who lives at 1117 Church, emerged as the top candidate for the job in a search which included 80 applicants from across the country and which cost a reported $2,500 in advertising fees in various publications. Guenther is presently Dial-A-Ride gram 4ftanager for the Transportation, Research and Planning Office of t h e Ford Motor Co., which helped sponsor the start of the Dial-A-Ride bus system. He has worked both contracturally and voluntarily with the AATA for the past four years. Before joining Ford Guenther worked as a field engineer for the Westinghouse Airbreak Co. in Illinois, including two years in Brussles, Belguim, for that company.- He received a civil engineering degree from Wisconsin State University in 1962, and taught there for a year in 1966. In 1969 he completed gradúate studies in Transportation from the Massachusettes Tnslitntp of Tcchnoloüj