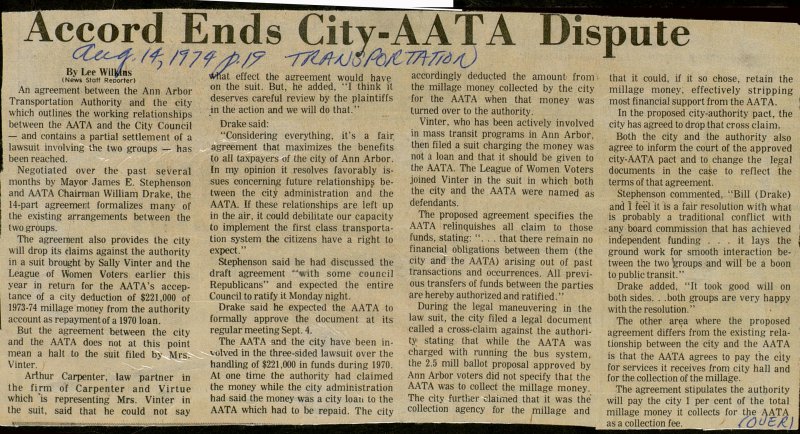 An agreement between the Ann Arbor Transportation Authority and the city which outlines the working relationships between the AATA and the City Council - and contains a partial settlement of a lawsuit involving the two groups - has been reached. Negotiated over the past several months by Mayor James E. Stephenson and AATA Chairman William Drake, the 14-part agreement formalizes many of the existing arrangements between the two groups. The agreement also provides the city wil] drop its claims against the authority in a suit brought by Sally Vinter and the League of Women Voters earlier this year in return for the AATA's acceptance of a city deduction of $221,000 of 1973-74 millage money from the authority account as repaymentof a 1970 loan. But the agreement between the city and the AATA does not at this point mean a halt to the suit filed by Mrs. Vinter. Arthur Carpenter, law partner in the firm of Carpenter and Virtue which "is representing Mrs. Vinter in the suit, said that he could not say Míat effect the aereement would have on the suit. But, he added, "I think it deserves careful review by the plaintiffs in the action and we will do that." Drake said: "Considering everything, it's a fair. agreement that maximizes the benefits to all taxpayers of the city of Ann Arbor. In my opinión it.resolves favorably issues concerning future relationships between the city administration and the AATA. If these relationships are left up in the air, it could debilítate our capacity to implement the first class transportation system the citizens have a right to expect." Stephenson said he had discussed the draft agreement "with some council Republicans" and expected the entire Council to ratify it Monday night. Drake said he expected the AATA to formally approve the document at its regular meeting Sept. 4. The AATA and the city have been involved in the three-sided lawsuit over the handling of $221,000 in funds during 1970. At one time the authority had claimed the money while the city administration had said the money was a city loan to the AATA which had to be repaid. The city accordingly deducted the amount from the millage money collected by the city for the AATA when that money was turned over to the authority. Vinter, who has been actively involved in mass transit programs in Ann Arbor, then filed a suit charging the money was not a loan and that it should be given to the AATA. The League of Women Voters joined Vinter in the suit in which both the city and the AATA were named as defendants. The proposed agreement specifies the AATA relinquishes all claim to those funds, stating: ". . . that there remain no financial obligations between them (the city and the AATA) arising out of past transactions and occurrences. All previous transfers of funds between the parties are hereby authorized and ratified." During the legal maneuvering in the law suit, the city filed a legal document called a cross-claim against the authority stating that while the AATA was charged with running the bus system, the 2.5 mili ballot proposal approved by Ann Arbor voters did not specify that the AATA was to collect the millage money. The city further claimed that it was the' collection agency for the millage and that it could, if it so chose, retain the millage money, effectively stripping most financial support from the AATA. In the proposed city-authority pact, the city has agreed to drop that cross claim. Both the city and the authority also agree to inform the court of the approved city-AATA pact and to change the legal documents in the case to reflect 'the terms of that agreement. Stephenson commented, "Bill (Drake) and I feel it is a fair resolution with what is probably a traditional conflict with ■ any board commission that has achieved independent funding . . . it lays the ground work for smooth interaction between the two Voups and will be a boon to public transit." Drake added, "It took good will on both sides. . .both groups are very happy with the resolution." The other area where the proposed agreement differs from the existing relationship between the city and the AATA is that the AATA agrees to pay the city for services it receives from city hall and for the collection of the millage. The agreement stipulates the authority will pay the city 1 per cent of the total millage money it collects for the AATA as a collection fee. ' föui)