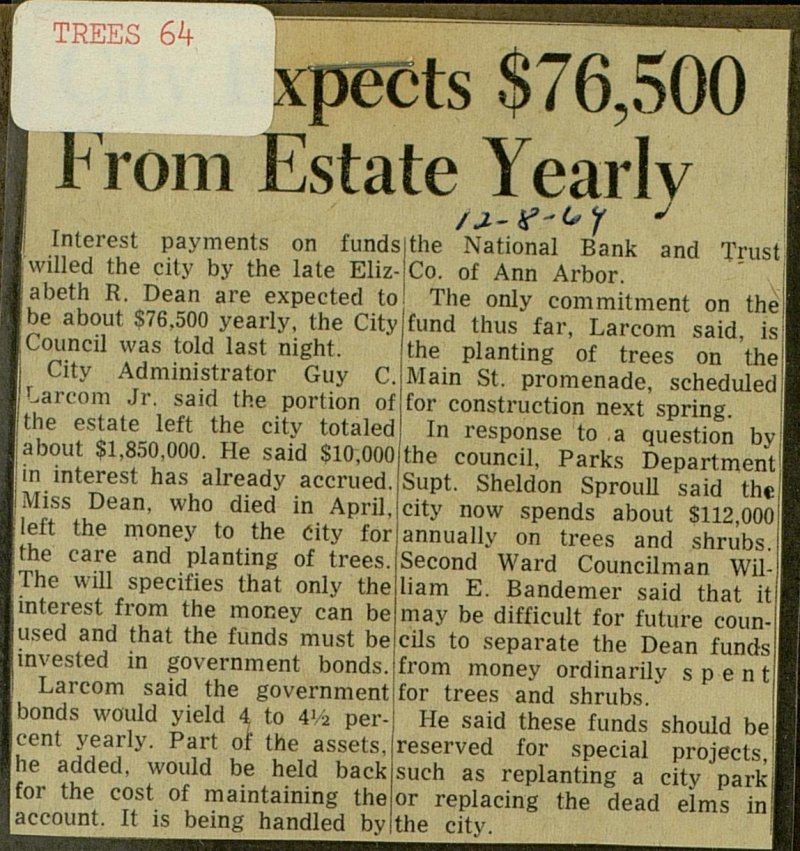 Interest payments on funds willed the city by the late Elizabeth R. Dean are expected to be about 576,500 yearly, the City Council was told last night. City Administrator Guy C. Larcom Jr. said the portion of the estáte left the city totaled about $1,850,000. He said $10,000 in interest has already accrued. Miss Dean, who died in April, left the money to the City for the care and planting of trees. The wil] specifies that only the interest from the money can be used and that the funds must be invested in government bonds. Larcom said the government bonds would yield 4, to 4' percent yearly. Part of the assets, : he added, would be held back i for the cost of maintaining the i account. It is being handled by the National Bank and Trust Co. of Ann Arbor. The only commitment on thé 1 fund thus far, Larcom said, is the planting of trees on the! Main St. promenade, scheduled for construction next spring. In response to a question by the council, Parks Department! Supt. Sheldon Sproull said the city now spends about S112,000 annually on trees and shrubs. Second Ward Councilman William E. Bandemer said that it may be difficult for future 1 eüs to separate the Dean funds from money ordinarily s p e n 1 for trees and shrubs. He said these funds should be reserved for special projects such as replanting a city park or replacing the dead elms in the city.