And Now, A Tree Grows On Downtown S. Ashley 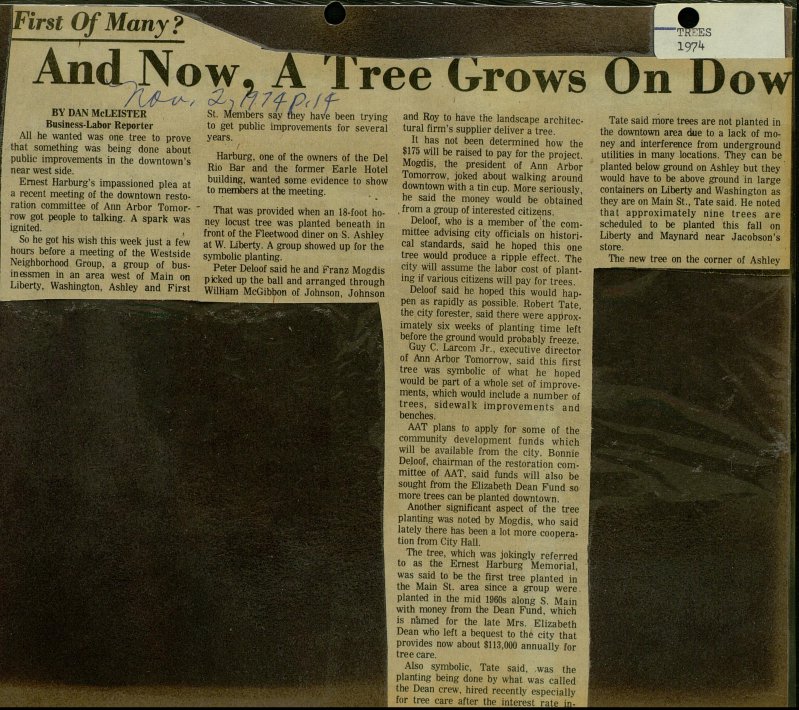 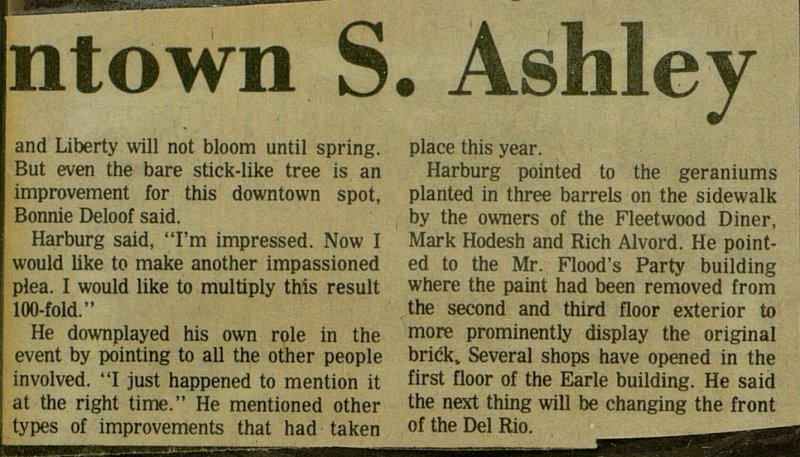 All he wanted was one tree to prove that something was being done about public improvements in the downtown's near west side. Emest Harburg's impassioned plea at a recent meeting of the downtown restoration committee of Ann Arbor Tomorrow got people to talking. A spark was ignited. So he got his wish this week just a few hours before a meeting of the Westside Neighborhood Group, a group of busin essmen in an area west of Main on Liberty, Washington, Ashley and First St. Members say fhey haVe been trying to get public improvements for several years. ■ Harburg, one of the owners of the Del Rio Bar and the former Earle Hotel building, vranted some evidence to show to members at the meeting. That was provided when an 18-foot honey locust tree was planted beneath in front of the Fleetwood diner on S. Ashley at W. Liberty. A group showed up for the symbolic planting. Peter Deloof said he and Franz Mogdis picked up the ball and arranged through Wiüiam McGibbon of Johnson, Johnson and Roy to have the landscape architectural firm's supplier deliver a tree. It has not been determined how the $175 will be raised to pay for the project. Mogdis, the president of Ann Arbor Tomorrow, joked about walking around downtown with a tin cup. More seriously, he said the money would be obtained' , f rom a group of interested citizens. Deloof, who is a member of 'the committee advising city officials on historical standards, said he hoped this one tree would produce a ripple effect. The city will assume the labor cost of planting if various citizens will pay for trees. Deloof said he hoped this would happen as rapidly as possible. Robert Tate the city forester, said there were apjjroximately six weeks of planting time left be.fore the ground would probably freeze. Guy C. Larcom Jr., executive director of Ann Arbor Tomorrow, said this first tree was symbolic of what he hoped would be part of a whole set of improvements, which would include a number of trees, sidewalk improvements and benches. AAT plans to apply for some of the community development furids which will be available from the city. Bonnie Deloof, chairman of the restoration committee of AAT, said funds will also be sought from the Elizabeth Dean Fund so more trees can be planted downtown. Another significant aspect of the tree planting was noted by Mogdis, who said lately there has been a lot more i tion from City Hall. The tree, which was jokingly referred to as the Ernest Harburg Memorial, was said to be the first tree planted in the Main St. área since a group were. planted in the mid 1960s along S. Main withmoney from the Dean Fund, which is n'amed for the late Mrs. Elizabeth Dean who left a bequest to the city that provides now about $113,000 annually for tree care. Also symbolic, Tate said, .was the planting being done by what was called the Dean crew, hired recently especially for tree care after thp intprpct roto ;„ Tate said more trees are not planted in the downtown área due to a lack of money and interference from underground Utilities in many locations. They can be planted below ground on Ashley but they would have to be above ground in large containers on Liberty and Washington as they are on Main St., Tate said. He noted that approximately nine trees are scheduled to be planted this fall on Liberty and Maynard near Jacobson's store. The new tree on the corner of Ashley and Liberty will not bloom until spring. But even the bare stick-like tree is an improvement for this downtown spot, Bonnie Deloof said. Harburg said, "I'm impressed. Now I would like to make another impassioned plea. I would like to multiply this result 100-fold." He downplayed his own role in the event by pointing to all the other people involved. "I just happened to mention it at the right time." He mentioned other types of improvements that had taken place this year. Harburg pointed to the geraniums planted in three barrels on the sidewalk by the owners of the Fleetwood Diner, Mark Hodesh and Rich Alvord. He pointed to the Mr. Flood's Party building where the paint had been removed from the second and third floor exterior to more prominently display the original brick, Several shops have opened in the first floor of the Earle building. He said the next thing will be changing the front of the Del Rio. -