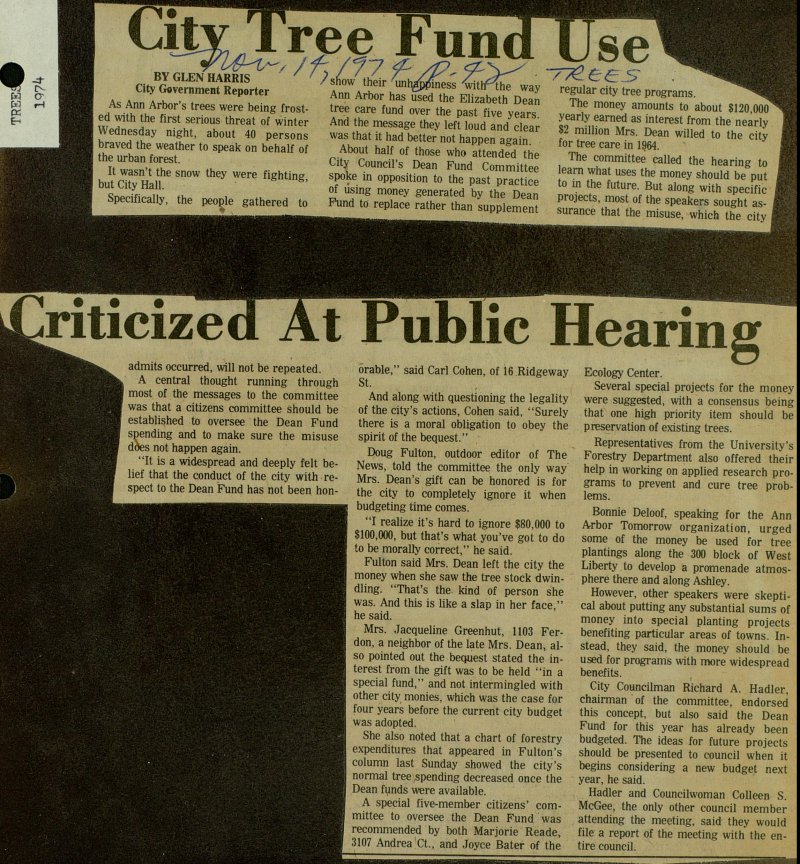 As Ann Arbor's trees were being frosted with the first serious threat of winter Wednesday night, about 40 persons braved the weather to speak on behalf of the urban forest. It wasn't the snow they were fiehtin? but City Hall. ë' Specifically, the people gathered to 'show their 'imhppiness 'witüthe way Ann Arbor has used the Elizabeth Dean tree care fund over the past five years And the message they left loud and clear was that ït had better not happen again. About half of those who attended the City Council's Dean Fund Committee spoke in opposition to the past practice of using money generated by the Dean Fund to replace rather than supplement regular city tree programs. ihe money amounts to about $120 000 yearly earned as interest from the nearly $2 milhon Mrs. Dean willed to the city tor tree care in 1964. The committee called the hearing to learn what uses the money should be put to m the future. But along with specific , projects, most of the speakers sought assurance that the misuse, which the city j admits occurred, will not be repeated. A central thought running through most of the messages to the committee was that a citizens committee should be established to oversee the Dean Fund spending and to make sure the misuse dèes not happen again. "It is a widespread and deeply feit belief that the conduct of the city with respect to the Dean Fund has not been orable," said Cari Cohén, of 16 Ridgeway St. And along with questioning the legality of the city's actions, Cohen said, "Surely there is a moral obligation to obey the spirit of the bequest." Doug Fulton, outdoor editor of The News, told the committee the only way Mrs. Dean's gift can be honored is for the city to completely ignore it when budgeting time comes. "I realize it's hard to ignore $80,000 to $100,000, but that's what you've got to do to be morally correct," he said. Fulton said Mrs. Dean left the city the money when she saw the tree stock tlwindling. "That's the kind of person she was. And this is like a slap in her face," he said. Mrs. Jacqueline Greenhut, 1103 Ferdon, a neighbor of the late Mrs. Dean, also pointed out the bequest stated the interest from the gift was to be held "in a special fund," and not intermingled with other city monies, which was the case for four years before the current city budget was adopted. She also noted that a chart of forestry expenditures that appeared in Fulton's column last Sunday showed the city's normal tree spending decreased once the Dean funds were available. A special five-member citizens' committee to oversee the Dean Fund was recommended by both Marjorie Reade, 3107 Andrea 'Ct., and Joyce Bater of the Ecology Center. Several special projects for the money were suggested, with a consensus being that one high priority item should be preservation of existing trees. Representativa from the University's Forestry Department also offered their help in working on applied research programs to prevent and cure tree problems. Bonnie Deloof, speaking for the Ann A-rbor Tomorrow organization, urged some of the money be used for tree plantings along the 300 block of West Liberty to develop a promenade atmosphere there and along Ashley. However, other speakers were skeptical about putting any substantial sums of money into special planting projects benefiting particular áreas of towns. Instead, they said, the money should be used for programs with more widespread benefits. City Councilman Richard A. Hadier, chairman of the committee, endorsed this concept, but also said the Dean Fund for this year has already been budgeted. The ideas for future projects should be presented to council when it begins considering a new budget next year, he said. Hadier and Councilwoman Colleen S. McGee, the only other council member attending the meeting, said they would file a report of the meeting with the entire council.