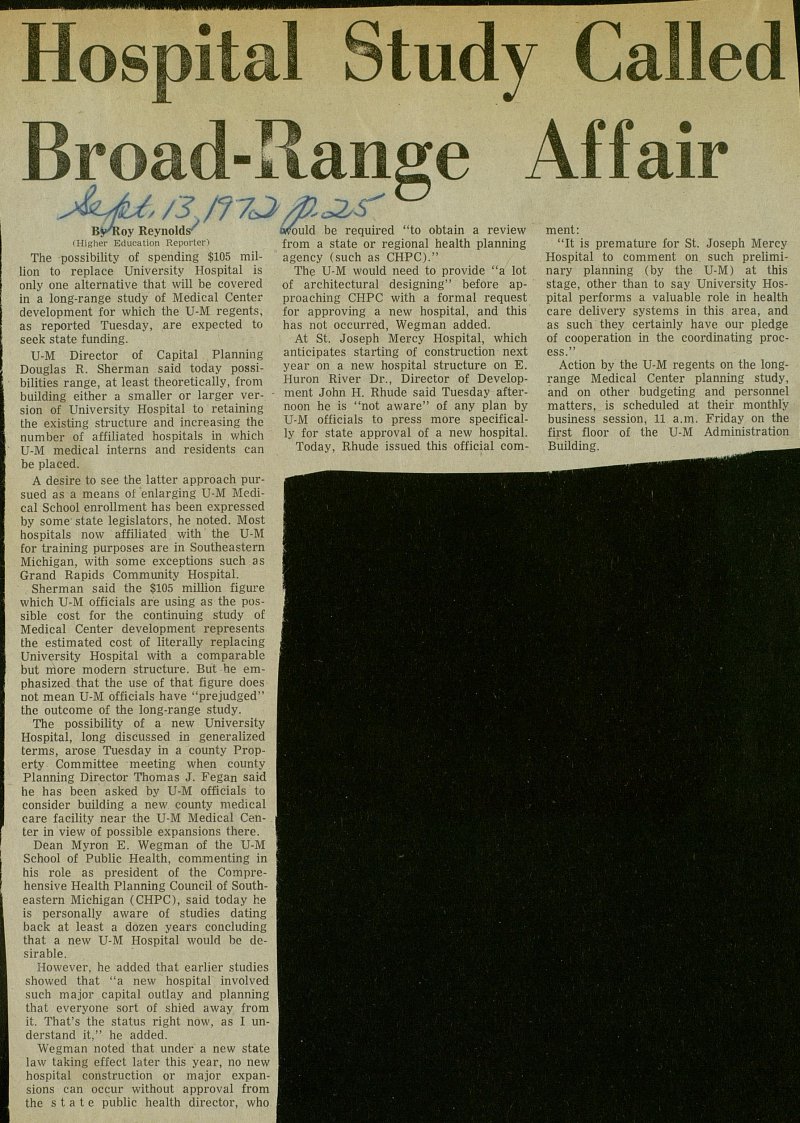 The possibility of spending $105 million to replace University Hospital is only one alternative that will be covered in a long-range study of Medical Center development for which the U-M regents, as reported Tuesday, are expected to seek state funding. U-M Director of Capital Planning Douglas R. Sherman said today possibilities range, at least theoretically, from building either a smaller or larger ■ sion of University Hospital to retaining the existing structure and increasing the number of affiliated hospitals in which U-M medical interns and residents can be placed. A desire to see the latter approach pursued as a means of enlarging U-M Medical School enrollment has been expressed by some state legislators, he noted. Most hospitals now affiliated with the U-M for training purposes are in Southeastern Michigan, with some exceptions such as Grand Rapids Community Hospital. Sherman said the $105 million figure which U-M officials are using as the possible cost for the continuing study of Medical Center development represents the estimated cost of literally replacing University Hospital with a comparable but more modern structure. But he emphasized that the use of that figure does not mean U-M officials have "prejudged" the outcome of the long-range study. The possibility of a new University Hospital, long discussed in generalized terms, arose Tuesday in a county Property Committee meeting when county Planning Director Thomas J. Fegan said he has been asked by U-M officials to consider building a new county medical care facility near the U-M Medical Center in view of possible expansions there. Dean Myron E. Wegman of the U-M School of Public Health, commenting in his role as president of the Comprehensive Health Planning Council of Southeastern Michigan (CHPC), said today he is personally aware of studies dating back at least a dozen years concluding that a new U-M Hospital would be desirable. However, he added that earlier studies showed that "a new hospital involved such major capital outlay and planning that everyone sort of shied away from it. That's the status right now, as I understand it," he added. Wegman noted that under a new state law taking effect later this year, no new hospital construction or major expansions can occur without approval from the state public health director, who tttfóuld be required "to obtain a review from a state or regional health planning agency (such as CHPC)." The U-M would need to provide "a lot of architectural designing" before approaching CHPC with a formal request for approving a new hospital, and this has not occurred, Wegman added. At St. Joseph Mercy Hospital, which anticipates starting of construction next year on a new hospital structure on E. Huron River Dr., Director of Development John H. Rhude said Tuesday afternoon he is "not aware" of any plan by U-M officials to press more specifically for state approval of a new hospital. Today, Rhude issued this official ment: "It is premature for St. Joseph Mercy Hospital to comment on such preliminary planning (by the U-M) at this stage, other than to say University Hospital performs a valuable role in health care delivery systems in this area, and as such they certainly have our pledge of eooperation in the coordinating process." Action by the U-M regents on the longrange Medical Center planning study, and on other budgeting and personnel matters, is scheduled at their monthly business session, 11 a.m. Friday on the first floor of the U-M Administration Building.