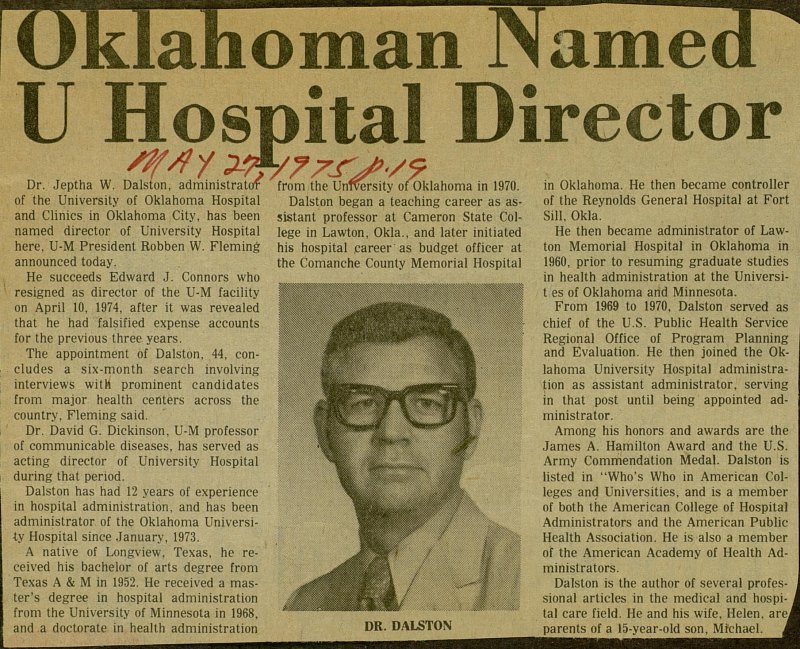 Dr. Jeptha W. Dalston, administrator of the University of Oklahoma Hospital and Clinics in Oklahoma City, has been named director of University Hospital here, U-M President Robben W. Fleming announced today. He succeeds Edward J. Connors who resigned as director of the U-M facility on April 10, 1974, after it was revealed that he had falsified expense accounts for the previous three years. The appointment of Dalston, 44, concludes a six-month search involving interviews witM prominent candidates from major health centers across the country, Fleming said. Dr. David G. Dickinson, U-M professor of communicable diseases, has served as acting director of University Hospital during that period. Dalston has had 12 years of experience in hospital administration, and has been administrator of the Oklahoma Universi■ty Hospital since January, 1973. A native of Longview, Texas, he received his bachelor of arts degree from Texas A & M in 1952. He received a master's degree in hospital administration from the University of Minnesota in 1968, and a doctórate in health administration from the UnTversity of Oklahoma in 1970. Dalston began a teaching career as assistant professor at Cameron State College in Lawton, Okla., and later initiated nis hospital career as budget officer at the Comanche County Memorial Hospital in Oklahoma. He then became controller of the Reynolds General Hospital at Fort Sill, Okla. He then became administrator of Lawton Memorial Hospital in Oklahoma in 1960, prior to resuming gradúate studies in health administration at the Universit es of Oklahoma and Minnesota. From 1969 to 1970, Dalston served as chief of the U.S. Public Health Service Regional Office of Program Planning and Evaluation. He then joined the Oklahoma University Hospital administration as assistant administrator, serving in that post until being appointed administrator. Among his honors and awards are the James A. Hamilton Award and the U.S. Army Commendation Medal. Dalston is listed in "Who's Who in American Colleges and Universities, and is a member of both the American College of Hospital Administrators and the American Public Health Association. He is also a member of the American Academy of Health Administrators. Dalston is the author of several professional articles in the medical and hospital care field. He and his wife, Helen, arei parents of a 15-year-oId son, Mrchael. A