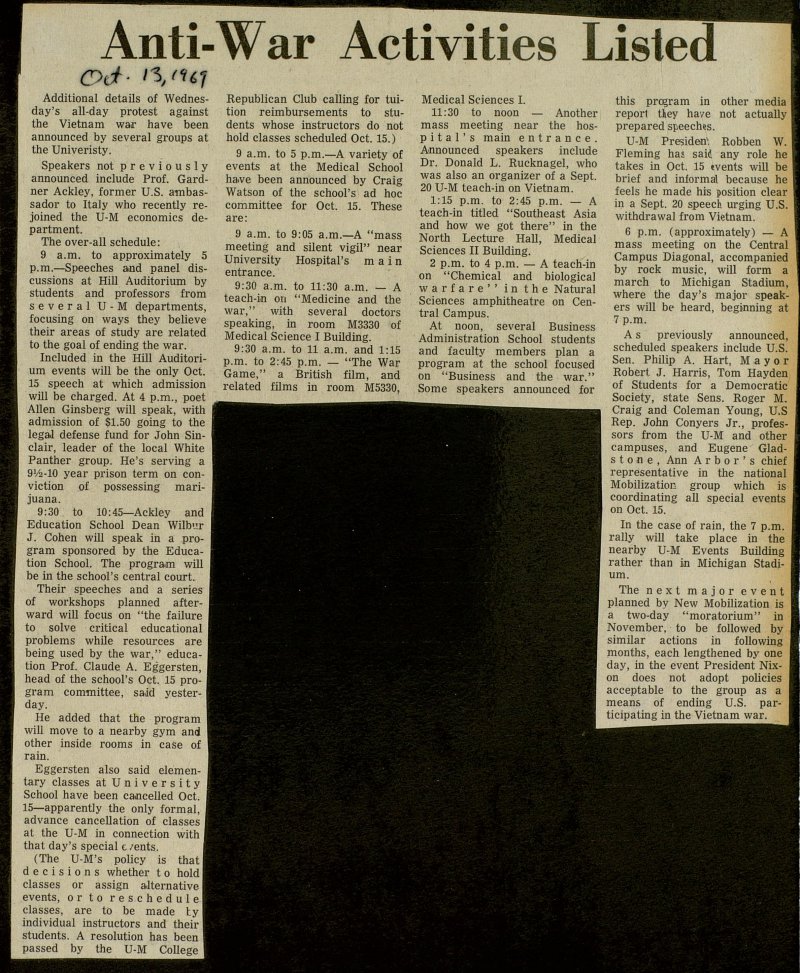 Additional details of Wednesg day's all-day protest against I the Vietnam war have been announced by several groups at the Univeristy. ,: Speakers not previously L announced include Prof. Gard ner Ackley, former U.S. ambasf' sador to Italy who recently re'A joined the U-M economics de? partment. j The over-all schedule: f: 9 a.m. to approximately 5 % p.m. - Speeches aod panel disr cussions at Hill Auditorium by i students and professors from F several U-M departments, S ■: focusing on ways they believe their areas of study are related e to the goal of ending the war. ï Included in the Hill Auditorif um events will be the only Oct. ■ 15 speech at which admission ji will be charged. At 4 p.m., poet I Allen Ginsberg will speak, with I I 1 admission of $1.50 going to the I 't I legaJ defense fund for John I - 1 clair, leader of the local White I i I Panther group. He's serving a I : I 9V2-10 year prison term on I I viction of possessing I " I juana. -1 9:30 to 10:45- Ackley and I Education School Dean Wilbv.r I I J. Cohen will speak in a I I gram sponsored by the I ! tion School. The program will I M be in the school's central court. ; Their speeches and a series I of workshops planned P t ward will focus on "the failure I to solve critical educational I Í problems while resources are m being used by the war," I d tion Prof. Claude A. Eggersten, K al head of the school's Oct. 15 I I gram committee, sadd I I day1 f He added that the program wS will move to a nearby gym and t J other inside rooms in case of j rain. Eggersten also said I ï tary classes atUniversityl 1 School have been cancelled Oct. lí 15- apparently the only formal, K H advance cancellation of classes K, : at the U-M in connection with B . that day's special e ents. .S (The U-M's policy is thatK decisions whether t o hold I classes or assign alternative E events, or to rescheduletij I classes, are to be made hy 1 individual instructors and their Ks I students. A resolution has been I a passed by the U-M College I Republican Club calling for tuition reimbursements to students whose instructors do not hold classes scheduled Oct. 15.) 9 a.m. to 5 p.m.- A variety of events at the Medical School ha.ve been announced by Craig Watson of the school's ad hoc committee for Oct. 15. These are: 9 a.m. to 9:05 a.m.- A "mass meeting and silent vigil" near University Hospital's m a i n entrance. 9:30 a.m. to 11:30 a.m. - A teach-in on "Medicine and the war," with several doctors speaking, in room M3330 of Medical Science I Building. 9:30 a.m. to 11 a.m. and 1:15 p.m. to 2:45 p.m. - "The War Game," a British film, and related films in room M5330, ■ - Medical Sciences I. 11:30 to noon - Another mass meeting near the hosp i t a 1 ' s main entrance. Announced speakers include Dr. Donald L. Rucknagel, who was also an organizer of a Sept. 20 U-M teach-in on Vietnam. 1:15 p.m. to 2:45 p.m. - A teach-in titled "Southeast Asia and how we got there" in the North Lecture Hall, Medical Sciences II Building. 2 p.m. to 4 p.m. - A teach-in on "Chemical and biológica] warfare" in the Natural Sciences amphitheatre on Central Campus. At noon, several Business Administration School students and íaculty members plan a program at the school focused on "Business and the war." Some speakers announced for this program in other media reporl they have not actually prepared speeches. U-M Presiden1, Robben W. Fleming has saii any role he takes in Oct. 15 events will be brief and informal because he feels he made his position clear in a Sept. 20 speech urging U.S. withdrawal from Vietnam. 6 p.m. (approximately) - A mass meeting on the Central Campus Diagonal, accompanied by rock music, will form a maren to Michigan Stadium, where the day's major speakers will be heard, beginning at 7 p.m. A s previously announced, scheduled speakers include U.S. Sen. Philip A. Hart, Mayor Robert J. Harris, Tom Hayden of Students for a Democratie Society, state Sens. Roger M. Craig and Coleman Young, U.S Rep. John Conyers Jr., professors from the U-M and other campuses, and Eugene Glads t o n e , Ann A r b o r ' s chief representative in the national Mobilization group which is coordinating all special events on Oct. 15. In the case of rain, the 7 p.m. rally will take place in the nearby U-M Events Building rather than in Michigan Stadium. The next major event planned by New Mobilization is a two-day "moratorium" in November, to be followed by I similar actions in following I months, each lengthened by one I day, in the event President I on does not adopt policies I acceptable to the group as a I means of ending U.S. I ticipating in the Vietnam war.