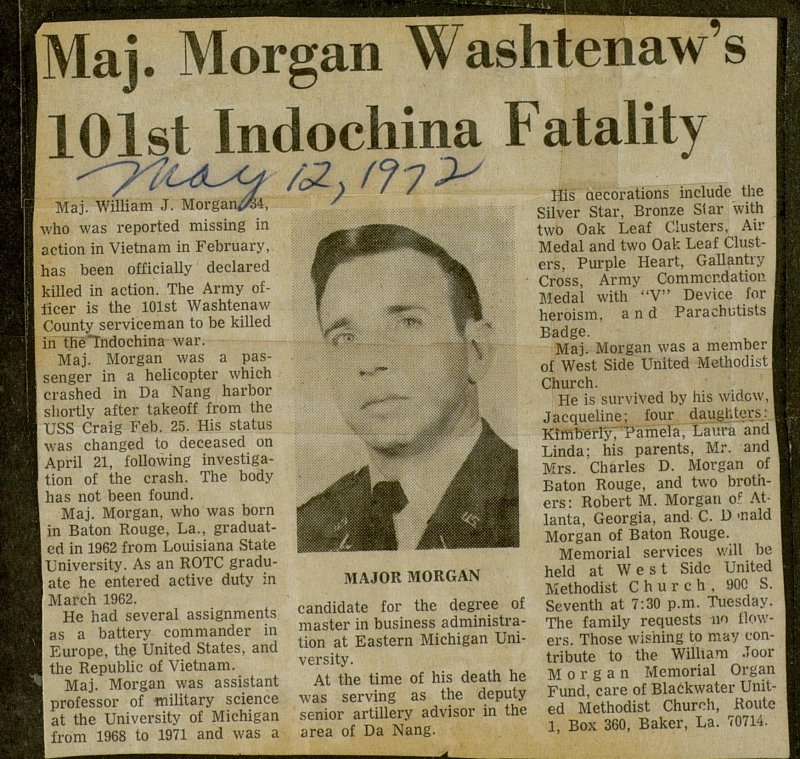 Maj. William J. Morgan, who was reported missing in action in Vietnam in February, has been officially declared killed in action. The Army officer is the 101st Washtenaw County serviceman to be killed in the Indochina war.
Maj. Morgan was a passenger in a helicopter which crashed in Da Nang harbor shortly after takeoff from the USS Craig Feb. 25. His status was changed to deceased on April 21, following investigation of the crash. The body has not been found.
Maj. Morgan, who was born in Baton Rouge, La., graduated in 1962 from Louisiana State University. As an ROTC graduate he entered active duty in March 1962.
He had several assignments as a battery commander in Europe, the United States, and the Republic of Vietnam.
Maj. Morgan was assistant professor of military science at the University of Michigan from 1968 to 1971 and was a candidate for the degree of master in business administration at Eastern Michigan University.
At the time of his death he was serving as the deputy senior artillery advisor in the area of Da Nang.
His decorations include the Silver Star, Bronze Star with two Oak Leaf Clusters, Air Medal and two Oak Leaf Clusters, Purple Heart, Gallantry Cross, Army Commendation Medal with "V" Device for heroism, and Parachutists Badge.
Maj. Morgan was a member of West Side United Methodist Church.
He is survived by his widow, Jacqueline; four daughters: Kimberly; Pamela, Laura and Linda; his parents, Mr. and Mrs. Charles D. Morgan of Baton Rouge, and two brothers: Robert M. Morgan of Atlanta, Georgia, and C. Donald Morgan of Baton Rouge.
Memorial services will be held at West Side United Methodist Church, 900 S. Seventh at 7:30 p.m. Tuesday. The family requests no flowers. Those wishing to may contribute to the William Joor Morgan Memorial Organ Fund, care of Blackwater United Methodist Church, Route 1, Box 360, Baker, La. 70714.