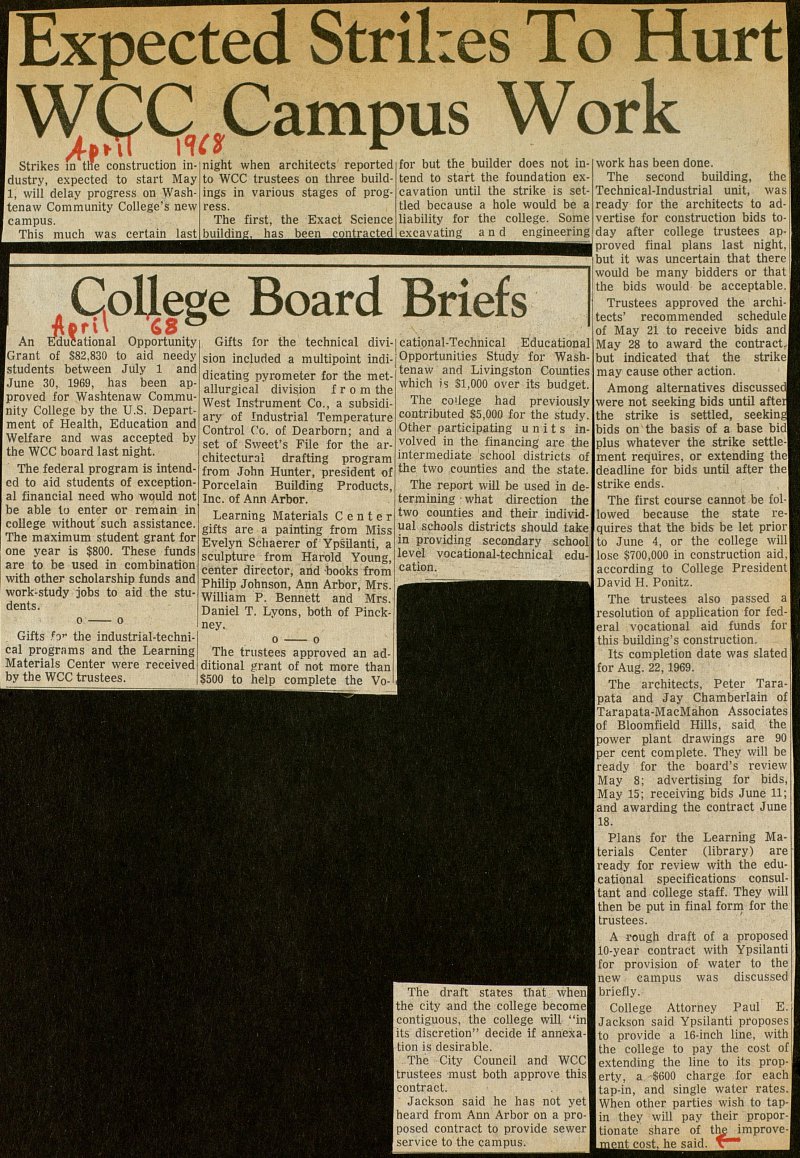 Strikes in tlie construction industry, expected to start May 1, will delay progress on Washtenaw Community College's new campus. This much was certain last night when architects reported to WCC trustees on three buildings in various stages of progress. The first, the Exact Science building, has been contracted for but the builder does not intend to start the foundation excavation until the strike is settled because a hole would be a liability for the college. Some excavating and engineering work has been done. The second building, the Technical-Industrial unit, was ready for the architects to advertise for construction bids today after college trustees approved final plans last night, but it was uncertain that there would be many bidders or that the bids would be acceptable. Trustees approved the archi-l tects' recommended schedulel of May 2i to receive bids andl May 28 to award the contract.! but indicated that the strikel may cause other action. Among alternatives discussedl were not seeking bids until aften the strike is settled, seekingl bids on the basis of a base bidl plus whatever the strike settle-l ment requires, or extending thej deadline for bids until after thel strike ends. The first course cannot be fol-l lowed because the state re-I quires that the bids be let priori to June 4, or the college willl lose $700,000 in construction aid, according to College President! David H. Ponitz. i The trustees also passed a resolution of application for fed-l eral vocational aid funds for this building's construction. lts completion date was slated for Aug. 22, 1969. The architects, Peter Tarapata and Jay Chamberlain of Tarapata-MacMahon Associates of Bloomfield Hills, said the power plant drawings are 90 per cent complete. They will be ready for the board' s review May 8; advertising for bids, May 15; receiving bids June 11; and awarding the contract June 18. Plans for the Learning Materials Center (library) are ready for review with the educational specifications consultant and college staff. They will then be put in final form for the trustees. A rough draft of a proposed 10-year contract with Ypsilanti for provisión of water to the new campus was discussed briefly. College Attorney Paul E. Jackson said Ypsilanti proposes to provide a 16-inch line, with the college to pay the cost of extending the line to its property, a $600 charge for each tap-in, and single water rates.i When other parties wish to tapin they will pay their proportionate share of theimprove.ment cost. he said. T" The draft states that when the city and the college become contiguous, the college will "in its discretion" decide if annexation is desirable. The City Council and WCC trustees must both approve this contract. Jackson said he has not yet heard from Ann Arbor on a proposed contract to provide sewer service to the campus.