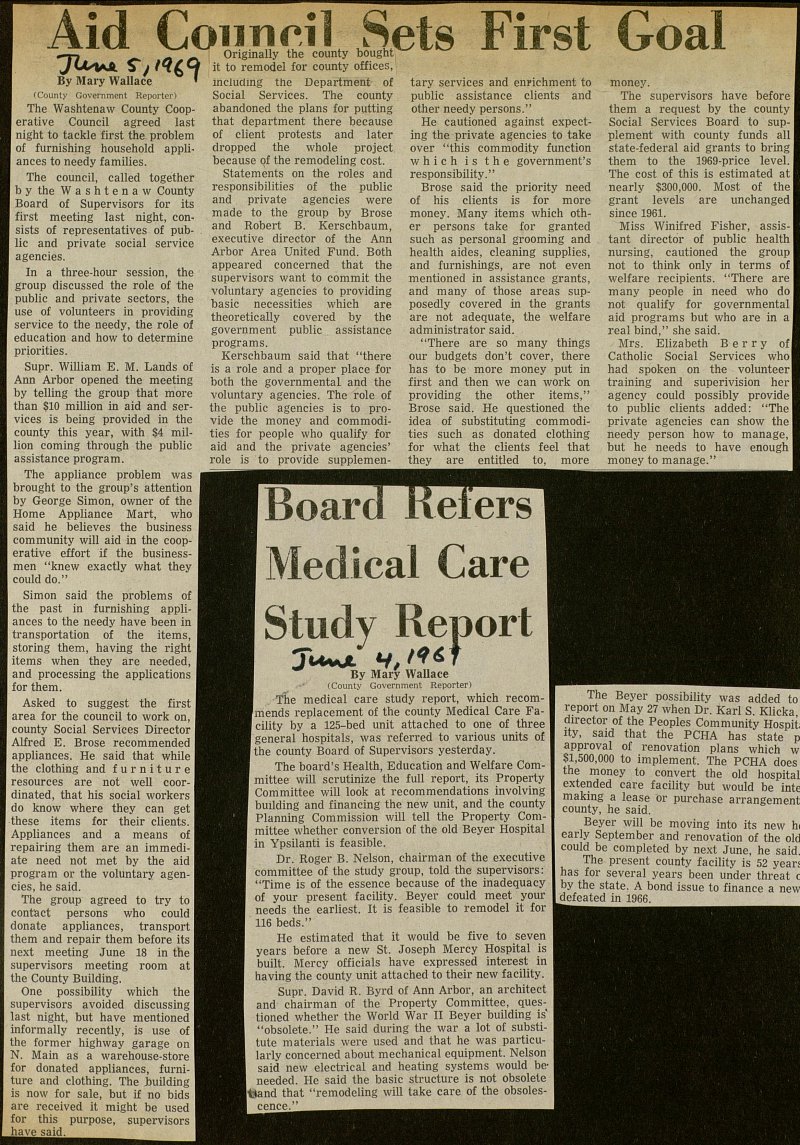 The Washtenaw County CoopI erative Council agreed last I night to tackle first the problem I of furnishing household appliI anees to needy families. The council, called together Iby the Washtenaw County I Board of Supervisors for its I first meeting last night, conI sists of representatives of public and private social service agencies. In a three-hour session, the group discussed the role of the public and private sectors, the use of volunteers in providing service to the needy, the role of education and how to determine priorities. Supr. William E. M. Lands of Ann Arbor opened the meeting by telling the group that more than $10 million in aid and services is being provided in the county this year, with $4 million coming through the public assistance program. The appliance problem was brought to the group's attention by George Simon, owner of the Home Appliance Mart, who said he believes the business community will aid in the cooperative effort if the businessmen "knew exactly what they could do." Simon said the problems of the past in furnishing applianees to the needy have been in I transportation of the items, I storing them, ha ving the right I items when they are needed, I and processing the applications I for them. j Asked to suggest the first I area for the council to work on, I county Social Services Director I Alfred E. Brose recommended I appliances. He said that while I the clothing and furniturel resources are not well 1 dinated, that his social workers I do know where they can get I these items for their clients. I Appliances and a means of I repairing them are an 1 ate need not met by the aid I program or the voluntary 1 cies, he said. The group agreed to try to I contact persons who could I dónate appliances, transport I them and repair them before its I next meeting June 18 in the I supervisors meeting room at I the County Building. One possibility which the I supervisors avoided discussing I last night, but have mentioned I informally recently, is use of I the former highway garage on I N. Main as a warehouse-store I for donated appliances, 1 ture and clothing. The building I is now for sale, but if no bids I are received it might be used I for this purpose, supervisors I have said. Originally the county bought it to remodel for county offices, including the Department of Social Services. The county abandoned the plans for putting that department there because of client protests and later dropped the whole project because of the remodeling cost. Statements on the roles and responsibilities of the public and private agencies were made to the group by Brose and Robert B. Kerschbaum, executive director of the Ann Arbor Area United Fund. Both appeared concerned that the supervisors want to commit the voluntary agencies to providing basic necessities which are theoretically covered by the government public assistance programs. Kerschbaum said that "there is a role and a proper place for both the governmental and the voluntary agencies. The role of the public agencies is to provide the money and commodities for people who qualify for aid and the private agencies' role is to provide tary services and enrichment to public assistance clients and other needy persons." He cautioned against expecting the private agencies to take over "this commodity function which is the government's responsibility." Brose said the priority need of his clients is for more money. Many items which other persons take for granted such as personal grooming and health aides, cleaning supplies, and furnishings, are not even mentioned in assistance grants, and many of those areas supposedly covered in the grants are not adequate, the welfare administrator said. "There are so many things our budgets don't cover, there has to be more money put in first and then we can work on providing the other items," Brose said. He questioned the idea of substituting commodities such as donated clothing for what the clients feel that they are entitled to, more money. The supervisors have before them a request by the county Social Services Board to supplement with county funds all state-federal aid grants to bring them to the 1969-price level. The cost of this is estimated at nearly $300,000. Most of the grant levéis are unchanged since 1961. Miss Winifred Fisher, assistant director of public health nursing, cautioned the group not to think only in terms of welfare recipients. "There are many people in need who do not qualify for governmental aid programs but who are in a real bind," she said. Mrs. Elizabeth B e r r y of Catholic Social Services who had spoken on the volunteer training and superivision her agency could possibly provide to public clients added: "The private agencies can show the needy person how to manage, but he needs to have enough money to manage."