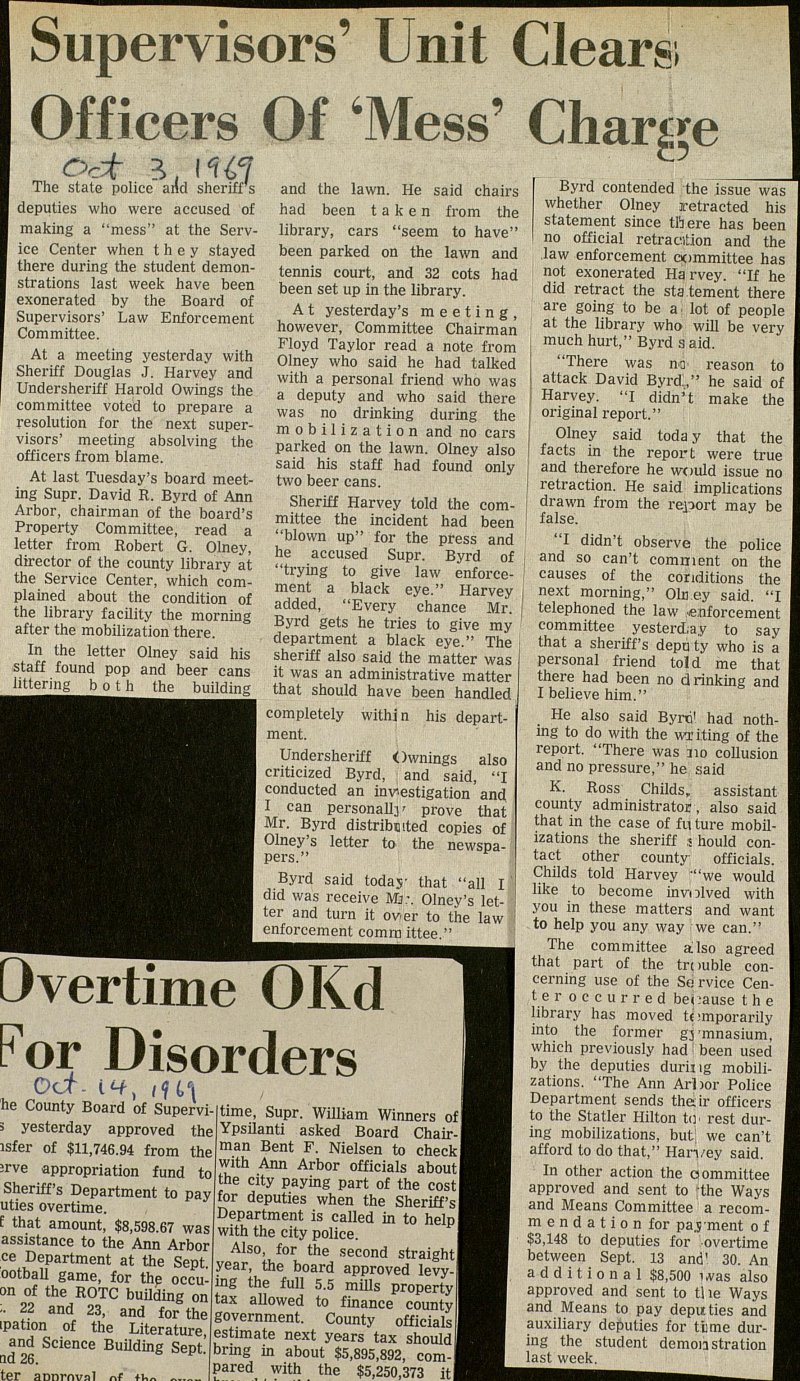 The state pólice añd sheriff's deputies who were accused of making a "mess" at the Service Center when t h e y stayed there during the student demonstrations last week have been exonerated by the Board of Supervisors' Law Enforcement Committee. At a meeting yesterday with Sheriff Douglas J. Harvey and Undersheriff Harold Owings the committee voted to prepare a resolution for the next supervisors' meeting absolving the officers from blame. At last Tuesday's board meeting Supr. David R. Byrd of Ann Arbor, chairman of the board's Property Committee, read a letter from Robert G. Olney, director of the county library at the Service Center, which complained about the condition of the library facility the morning after the mobilization there. In the letter Olney said his staff found pop and beer cans littering b o t h the building and the lawn. He said chairs had been taken from the library, cars "seem to have" been parked on the lawn and tennis court, and 32 cots had been set up in the library. A t yesterday's meeting, however, Committee Chairman Floyd Taylor read a note from Olney who said he had talked with a personal friend who was a deputy and who said there was no drinking during the mobilization and no cars parked on the lawn. Olney also said his staff had found only two beer cans. Sheriff Harvey told the committee the incident had been "blown up" for the press and he accused Supr. Byrd of "trying to give law ! ment a black eye." Harvey , added, "Every chance Mr. j Byrd gets he tries to give my department a black eye." The sheriff also said the matter was it was an administrative matter that should have been handled completely within his department. Undersheriff Ownings also cnticized Byrd, and said, "I conducted an investigation and I can personalia ' prove that Mr. Byrd distribmted copies of Olney's letter to the newspapers." Byrd said today that "all I ' did was receive Mj. Olney's letter and turn it over to the law i enforcement comrn ittee." Byrd contended the issue was whether Olney retracted nis statement since tb ere has been no official retraction and the law enforcement oommittee has not exonerated Ha rvey. "If he did retract the statement there are going to be a lot of people at the library who will be very muchhurt," Byrd said. "There was m reason to attack David Byrd," he said of Harvey. "I didn't make the original report." Olney said toda y that the f acts in the report were true and therefore he would issue no retraction. He said implications drawn from the report may be false. "I didn't observe the pólice and so can't comment on the causes of the coriditions the next morning," Olü.ey said. "I telephoned the law etiforcement committee yestercLay to say that a sheriff's depnty who is a personal friend told me that there had been no drinking and I believe him." He also said Byni' had nothmg to do with the wri.ting of the report. "There was 310 collusion and no pressure," he said K. Ross Childs, assistant county administrator , also said that in the case of fu ture mobilizations the sheriff 5 hould contact other county officials. Childs told Harvey "'we would like to become involved with you in these matters and want to help you any way we can." The committee álso agreed that part of the tnmble concerning use of the Service Centeroccurred beoause the library has moved t mporarily into the former gymnasium, which previously had been used by the deputies during mobilizations. "The Ann Arbor Pólice Department sends the ir officers to the Statler Hilton Uy rest during mobilizations, but' we can't afford to do that," Harvey said. In other action the oommittee approved and sent to the Ways and Means Committee a recommendationfor pa.s'ment o f I $3,148 to deputies for overtime between Sept. 13 and' 30. An I a d d i t i o n a 1 $8,500 i,vas also I approved and sent to the Ways I and Means to pay deputies and I auxiliary deputies for tiime I ing the student demon stration I last week. ■ --