Ambulance Ordinance To Get Further Study 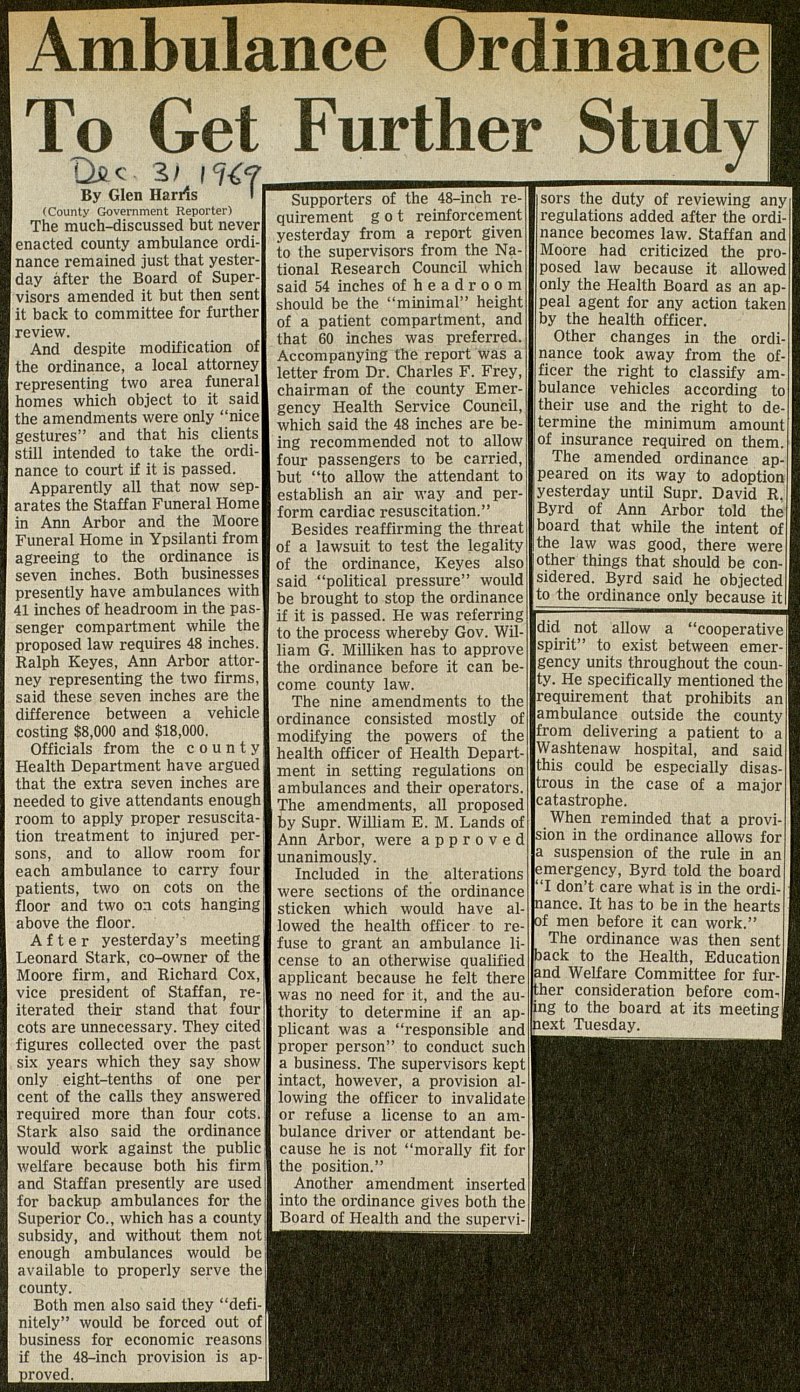 The much-discussed but never enacted county ambulance ordinance remained just that yesterday áfter the Board of Supervisors amended it but then sent it back to committee for further review. And despite modification of the ordinance, a local attorney representing two área funeral homes which object to it said the amendments were only "nice gestures" and that his clients still intended to take the ordinance to court if it is passed. Apparenüy all that now separates the Staffan Funeral Home in Ann Arbor and the Moore Funeral Home in Ypsilanti from agreeing to the ordinance is seven inches. Both businesses presently have ambulances with 41 inches of headroom in the passenger compartment while the proposed law requires 48 inches. Ralph Keyes, Ann Arbor attorney representing the two firms, said these seven inches are the difference between a vehicle costing $8,000 and $18,000. Officials from the county Health Department have argued that the extra seven inches are needed to give attendants enough room to apply proper resuscitation treatment to injured persons, and to allow room for each ambulance to carry four patients, two on cots on the floor and two on cots hanging above the floor. A f t e r yesterday's meeting Leonard Stark, co-owner of the Moore firm, and Richard Cox, vice president of Staffan, reiterated their stand that four cots are unnecessary. They cited figures collected over the past six years which they say show only eight-tenths of one per cent of the calis they answered required more than four cots. Stark also said the ordinance would work against the public welfare because both his firm and Staffan presently are used for backup ambulances for the Superior Co., which has a county subsidy, and without them not enough ambulances would be available to properly serve the county. I Both men also said they "definitely" would be forced out of business for economie reasons if the 48-inch provisión is approved. J Supporters of the 48-inch requirement g o t reinforcement yesterday from a report given to the supervisors from the National Research Council which said 54 inches ofheadroom should be the "minimal" height of a patiënt compartment, and that 60 inches was preferred. Accompanying the report was a letter from Dr. Charles F. Frey, chairman of the county Emergency Health Service Council, which said the 48 inches are being recommended not to allow four passengers to be carried, but "to allow the attendant to establish an air way and perform cardiac resuscitation." Besides reaffirming the threat of a lawsuit to test the legality of the ordinance, Keyes also said "political pressure" would be brought to stop the ordinance if it is passed. He was referring to the process whereby Gov. William G. Milliken has to approve the ordinance before it can become county law. The nine amendments to the ordinance consisted mostly of modifying the powers of the health officer of Health Department in setting regulations on ambulances and their operators. The amendments, all proposed by Supr. William E. M. Lands of Ann Arbor, were approved unanimously. Included in the alterations were sections of the ordinance sticken which would have allowed the health officer to refuse to grant an ambulance license to an otherwise qualified applicant because he feit there was no need for it, and the authority to determine if an applicant was a "responsible and proper person" to conduct such a business. The supervisors kept intact, however, a provisión allowing the officer to invalídate or refuse a license to an ambulance driver or attendant because he is not "morally fit for the position." Another amendment inserted into the ordinance gives both the Board of Health and the sors the duty of reviewing any regulations added after the ordinance becomes law. Staffan and Moóre had criticized the proposed law because it allowed only the Health Board as an appeal agent for any action taken by the health officer. Other changes in the ordinance took away from the officer the right to classify ambulance vehicles according to their use and the right to determine the minimum amount of insurance required on them. The amended ordinance appeared on its way to adoption yesterday until Supr. David R. Byrd of Ann Arbor told the Doard that while the intent of the law was good, there were other things that should be considered. Byrd said he objected ;o the ordinance only because it did not allow a "cooperative spirit" to exist between emergency units throughout the county. He specifically mentioned the requirement that prohibits an ambulance outside the county from delivering a patiënt to a Washtenaw hospital, and said this could be especially disastrous in the case of a major catastrophe. When reminded that a provisión in the ordinance allows for a suspension of the rule in an emergency, Byrd told the board "I don't care what is in the ordinance. It has to be in the hearts of men before it can work." The ordinance was then sent back to the Health, Education and Welfare Committee for furher consideration before com-l ng to the board at its meeting! Dext Tuesday.