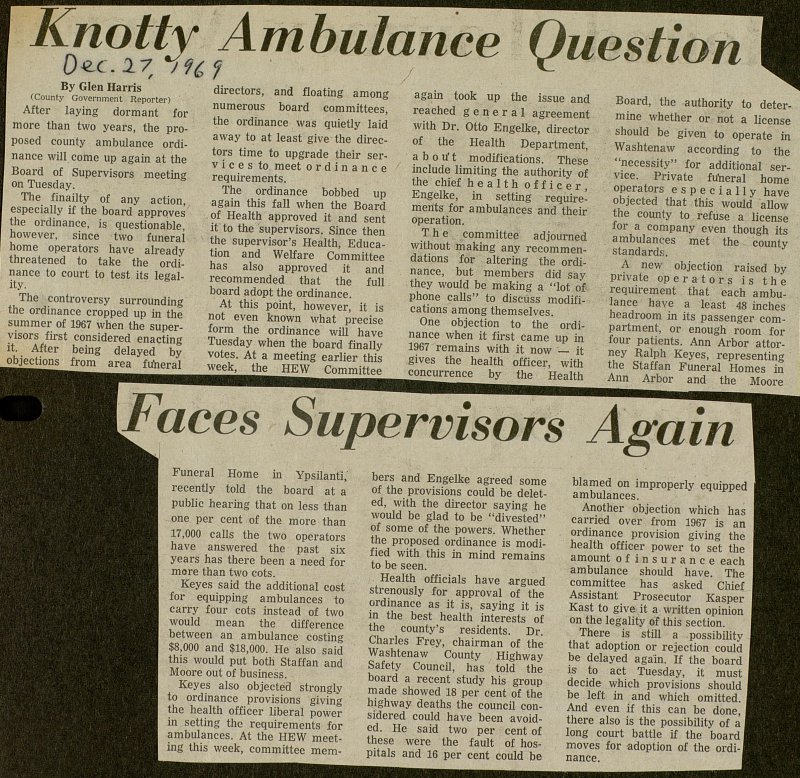 After laying dormant for more than two years, the proposed county ambulance ordinance will come up again at the Board of Supervisors meeting on Tuesday. The finailty of any action especially if the board approves the ordinance, is questionable however, since two funeral home operators have already threatened to take the ordinance to court to test its legality. The controversy surrounding the ordinance cropped up in the summer of 1967 when the supervisors first considered enacting it. After being delayed by objections from área funeral directors, and floating among numerous board committees, the ordinance was quietly laid away to at least give the directors time to upgrade their serv i c e s to meet ordinance requirements. The ordinance bobbed up again this fall when the Board of Health approved it and sent it to the supervisors. Since then the supervisor's Health, Education and Welfare Committee has also approved it and recommended that the full board adopt the ordinance. At this point, however, it is not even known what precise form the ordinance will have Tuesday when the board finally votes. At a meeting earlier this week, the HEW Committee again took up the issue and reached general agreement with Dr. Otto Engelke, director of the Health Department, a b o u' t modifications. These include limiting the authority of the chief health officer, Engelke, in setting requirements for ambulances and their operation. The committee adjourned without making any recommendations för altering the ordinance, but members did say they would be making a "lot of phone calis" to discüss modifications among themselves. One objection to the ordinance when it first carne up in 1967 remains with it now - it gives the health officer, with concurrence by the Health Board, the authority to determine whether or not a license should be given to opérate in Washtenaw according to the "necessity" for additional service. Private funeral home operators especially have objected that this would allow the county to refuse a license for a company even though its ambulances met the county standards. A new objection raised by private op erators is the requirement that each ambulance have a least 48 inches headroom in its passenger compartment, or enough room for four patients. Ann Arbor attorney Ralph Keyes, representing the Staffan Funeral Homes in Ann Arbor and the Moore 11- ■■ Funeral Home in Ypsilanti, recently told the board at a public hearing that on less than one per cent of the more than 17,000 calis the two operators have answered the past six years has there been a need for more than two cots. Keyes said the additional cost for equipping ambulances to carry four cots instead of two would mean the difference between an ambulance costing $8,000 and $18,000. He also said this would put both Staffan and Moore out of business. Keyes also objected strongly to ordinance provisions giving the health officer liberal power in setting the requirements for ambulances. At the HEW meeting this week, committee bers and Engelke agreed some of the provisions could be deleted, with the director saying he would be glad to be "divested" of some of the powers. Whether the proposed ordinanee is modified with this in mind remains to be seen. Health officials have argued strenously for approval of the ordinanee as it is, saying it is in the best health interests of the county's residents. Dr. Charles Frey, chairman of the Washtenaw County Highway Safety Council, has told the board a recent study his group made showed 18 per cent of the highway deaths the council considered could have been avoided. He said two per cent of these were the fault of hospitals and 16 per cent could be blamed on improperly equipped ambulances. Another objection which has carried over from 1967 is an ordinance provisión giving the health officer power to set the amount of insurance each ambulance should have. The committee has asked Chief Assistant Prosecutor Kasper Kast to give it a written opinión on the legality of this section. There is still a possibility that adoption or rejection could be delayed again. If the board is to act Tuesday, it must I decide which provisions should be left in and which omitted. I And even if this can be done, I there also is the possibility of a I long court battle if the board I moves for adoption of the ordi-l nance. I