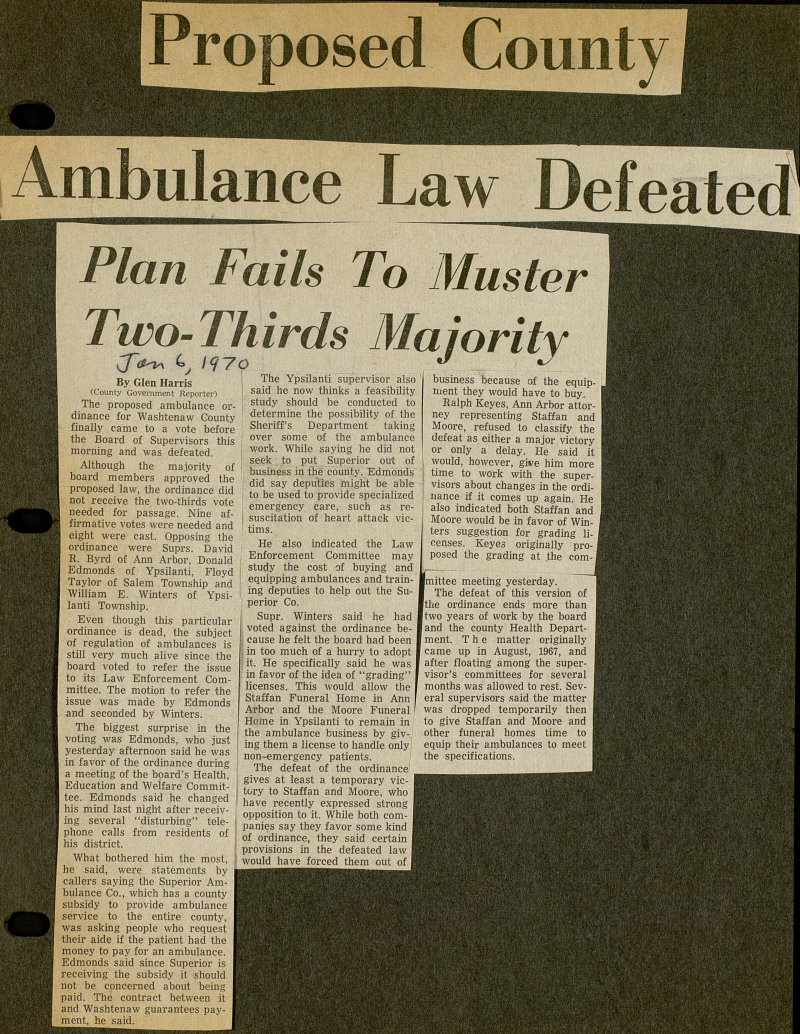 The proposed ambulance ordinance for Washtenaw Gounty finally carne to a vote before the Board of Supervisors this morning and was defeated. Although the majority of board members approved the proposed law, the ordinance did not receive the two-thirds vote needed for passage. Nine affirmative votes were needed and eight were cast. Opposing the ordinance were Suprs. David R. Byrd of Ann Arbor, Donald Edmonds of Ypsilanti, Floyd Taylor of Salem Township and William E. Winters of ' lanti Township. Even though this particular ordinance is dead, the subject of regulation of ambulances is still very much alive since the board voted to refer the issue to its Law Enforcement Committee. The motion to refer the issue was made by Edmonds and seconded by Winters. The biggest surprise in the voting was Edmonds, who just yesterday afternoon said he was in favor of the ordinance during a meeting of the board's Health, Education and Welfare Committee. Edmonds said he changed his mind last night after receiving several "disturbing" telephone calis from residents of his district. What bothered him the most, he said, were statements by callers saying the Superior Ambulance Co., which has a county subsidy to provide ambulance service to the entire county, was asking people who request their aide if the patiënt had the money to pay for an ambulance. Edmonds said since Superior is receiving the subsidy it should not be concerned about being paid. The contract between it and Washtenaw guarantees payment, he said. The Ypsilanti supervisor also said he now thinks a feasibility study should be conducted to determine the possibility of the Sheriff's Department taking over some of the ambulance work. While saying he did not seek to put Superior out of business in the county. Edmonds did say deputies might be able to be used to provide specialized emergency care, such as re! suscitation of heart attack vic! tims. He also indicated the Law Enforcement Committee may study the cost of buying and equipping ambulances and training deputies to help out the Superior Co. Supr. Winters said he had voted against the ordinance because he feit the board had been in too much of a hurry to adopt it. He specifically said he was in favor of the idea of "grading" licenses. This would allow the Staffan Funeral Home in Ann Arbor and the Moore Funeral Home in Ypsilanti to remain in the ambulance business by giving them a license to handle only non-emergency patients. The defeat of the ordinance gives at least a temporary I tory to Staffan and Moore, who I have recently expressed strong I opposition to it. While both I panies say they favor some kind I of ordinance, they said certain I provisions in the defeated law I would have forced them out of I business because of the equipment they would have to buy. Ralph Keyes, Ann Arbor attorney representing Staffan and Moore, refused to classify the defeat as either a major victory or only a delay. He said it would, however, give him more time to work with the supervisors about changes in the ordinance if it comes up again. He also indicated both Staffan and Moore would be in favor of Winters suggestion for grading lioenses. Keyes originally 1 posed the grading at the mittee meeting yesterday. The defeat of this version of the ordinance ends more than two years of work by the board and the county Health Department. The matter originally came up in August, 1967, and after floating among the supervisor's committees for several months was allowed to rest. Several supervisors said the matter was dropped temporarily then to give Staffan and Moore and other funeral homes time to equip their ambulances to meet the specifications.