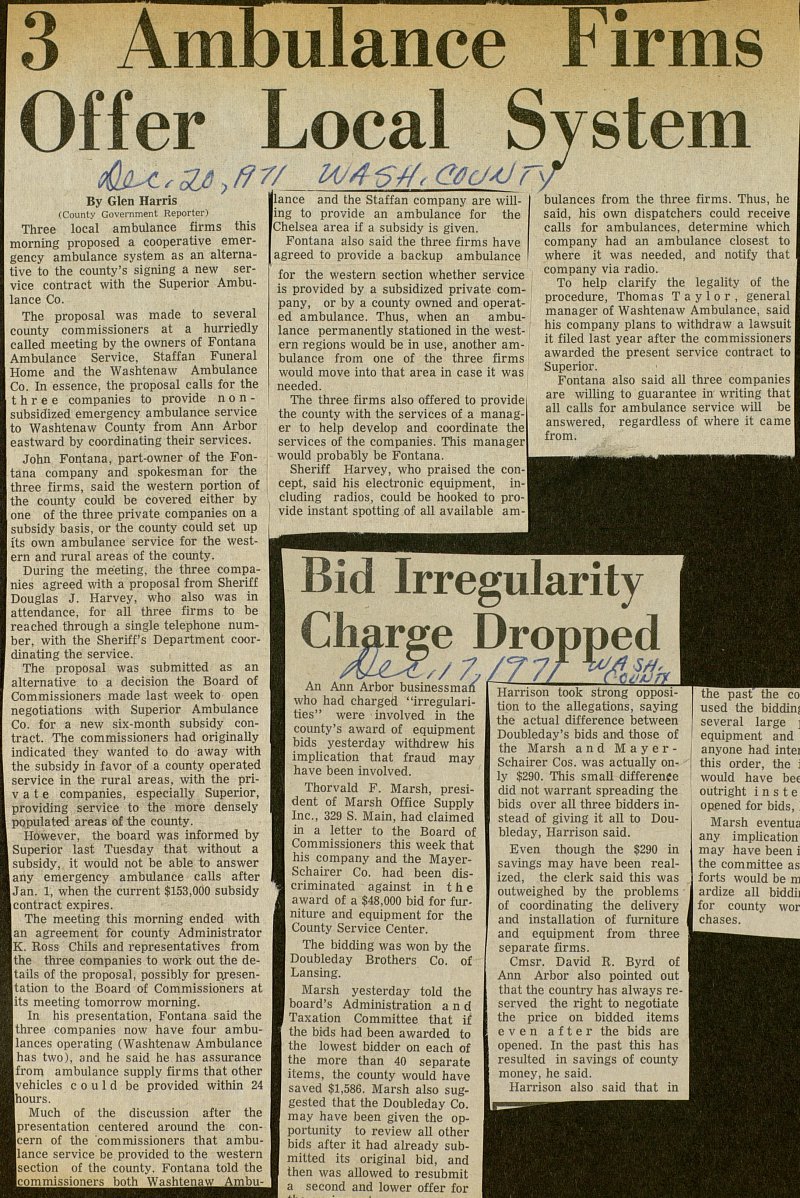 Three local ambulance firms this morning proposed a cooperative emergency ambulance system as an alternative to the county's signing a new service contract with the Superior Ambulance Co. The proposal was made to several county commissioners at a hurriedly called meeting by the owners of Fontana Ambulance Service, Staffan Funeral Home and the Washtenaw Ambulance Co. In essence, the proposal calis for the three companies to provide , subsidized emergency ambulance service to Washtenaw County from Ann Arbor eastward by coordinating their services. John Fontana, part-o wner of the Fontana company and spokesman for the three firms, said the western portion of the county could be covered either by one of the three private companies on a subsidy basis, or the county could set up its own ambulance service for the western and rural áreas of the county. During the meeting, the three companies agreed with a proposal from Sheriff Douglas J. Harvey, who also was in attendance, for all three firms to be reached through a single telephone number, with the Sheriff's Department coordinating the service. The proposal was submitted as an alternative to a decisión the Board of Commissioners made last week to open negotiations with Superior Ambulance Co. for a new six-month subsidy contract. The commissioners had originally indicated they wanted to do away with the subsidy in favor of a county operated service in the rural áreas, with the priv a t e companies, especially Superior, providing service to the more densely populated areas of the county. However, the board was informed by Superior last Tuesday that without a subsidy, it would not be able to answer any emergency ambulance calis after I Jan. 1, when the current $153,000 subsidy Icontract expires. The meeting this morning ended with lan agreement for county Administrator K. Ross Chils and representatives from [the three companies to work out the deItails of the proposal, possibly for pesenItation to the Board of Commissioners at lits meeting tomorrow morning. In his presentation, Fontana said the ■ three companies now have four ambulances operating (Washtenaw Ambulance Ihas two), and he said he has assurance ■ from ambulance supply firms that other Ivehicles could be provided within 24 Ihours. Much of the discussion after the Ipresentation centered around the conIcern of the commissioners that ambu■lance service be provided to the western Bsection of the county. Fontana told the Bcommissioners both Washtena.w. lance and the Staffan company are willing to pro vide an ambulance for the Chelsea área if a subsidy is given. Fontana also said the three firms have agreed to provide a backup ambulance for the western section whether service is provided by a subsidized private company, or by a county owned and operated ambulance. Thus, when an ambulance permanently stationed in the western regions would be in use, another ambulance from one of the three firms would move into that area in case it was needed. The three firms also offered to provide the county with the services of a manager to help develop and coordinate the services of the companies. This manager would probably be Fontana. Sheriff Harvey, who praised the concept, said his electronic equipment, including radios, could be hooked to provide instant spotting of all available bulances from the three firms. Thus, he said, his own dispatchers could receive calis for ambulances, determine which company had an ambulance closest to where it was needed, and notify that company via radio. To help clarify the legality of the procedure, Thomas T a y 1 o r , general manager of Washtenaw Ambulance, said his company plans to withdraw a lawsuit it filed last year after the commissioners awarded the present service contract to Superior. Fontana also said all three companies are willing to guarantee in writing that all calis for ambulance service will be answered, regardless of where it came from.