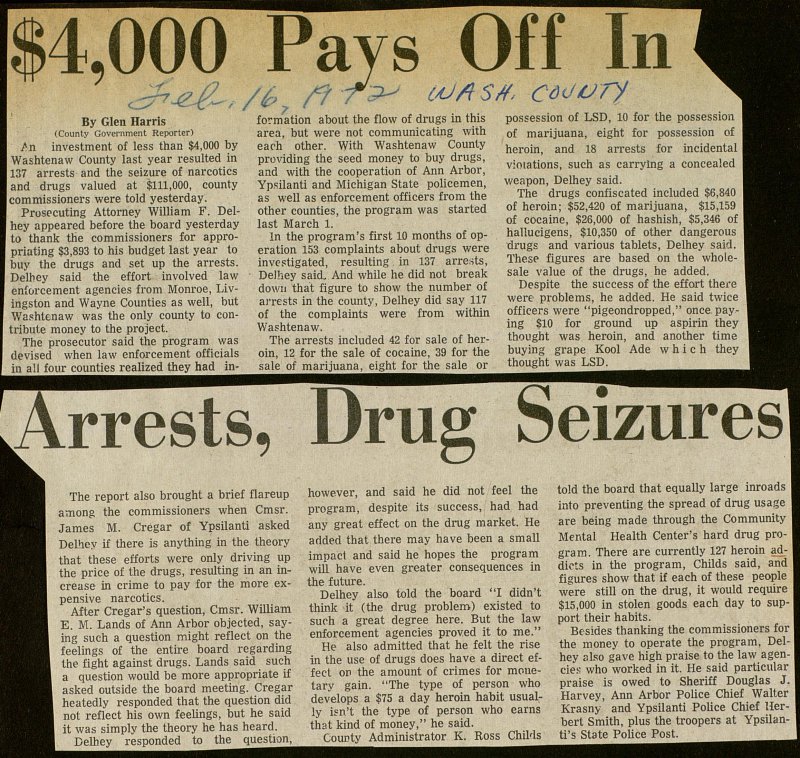 An investment of less than $4,000 by Washtenaw County last year resulted in 137 arrests and the seizure of narcotics and drugs valued at $111,000, county commissioners were told yesterday. Prosecuting Attorney William F. Delhey appeared before the board yesterday to thank the commissioners for appropriating $3,893 to his budget last year lo buy the drugs and set up the arrests. Delhey said the effort involved law enforcement agencies from Monroe, Livingston and Wayne Counties as well, but Washtenaw was the only county to contribute money to the project. The prosecutor said the program was devised when law enforcement officials in all four counties realized they had information about the flow of drugs in this area, but were not communicating with each other. With Washtenaw County providing the seed money to buy drugs, and with the cooperation of Ann Arbor, Ypsilanti and Michigan State policemen, as well as enforcement officers from the other counties, the program was started last March 1. In the program's first 10 months of operation 153 complaints about drugs were investigated, resulting in 137 arrests, Delhey said. And while he did not break down that figure to show the number of arrests in the county, Delhey did say 117 of the complaints were from within Washtenaw. The arrests included 42 for sale of heroin, 12 for the sale of cocaine, 39 for the sale of marijuana, eight for the sale or possession of LSD, 10 for the possession of marijuana, eight for possession of heroin, and 18 arrests for incidental violations, such as carrying a concealed weapon, Delhey said. The drugs confiscated included $6,840 of heroin; $52,420 of marijuana, $15,159 of cocaine, $26,000 of hashish, $5,346 of hallucigens, $10,350 of other dangerous drugs and various tablets, Delhey said. These figures are based on the wholesale value of the drugs, he added. Despite the success of the effort there were problems, he added. He said twice officers were "pigeon-dropped," once paying $10 for ground up aspirin they thought was heroin, and another time buying grape Kool Ade which they thought was LSD. The report also brought a brief flareup among the commissioners when Cmsr. James M. Cregar of Ypsilanti asked Delhey if there is anything in the theory that these efforts were only driving up the price of the drugs, resulting in an increase in crime to pay for the more expensive narcotics. After Cregar's question, Cmsr. William E. M. Lands of Ann Arbor objected, saying such a question might reflect on the feelings of the entire board regarding the fight against drugs. Lands said such a question would be more appropriate if asked outside the board meeting. Cregar heatedly responded that the question did not reflect his own feelings, but he said it was simply the theory he has heard. Delhey responded to the question, however, and said he did not feel the program, despite its success, had had any great effect on the drug market. He added that there may have been a small impact and said he hopes the program will have even greater consequences in the future. Delhey also told the board "I didn't think it (the drug problem) existed to such a great degree here. But the law enforcement agencies proved it to me." He also admitted that he felt the rise in the use of drugs does have a direct effect op the amount of crimes for monetary gain. "The type of person who develops a $75 a day heroin habit usually isn't the type of person who earns that kind of money," he said. County Administrator K. Ross Childs told the board that equally large inroads into preventing the spread of drug usage are being made through the Community Mental Health Center's hard drug program. There are currently 127 heroin addicts in the program, Childs said, and figures show that if each of these people were still on the drug, it would require $15,000 in stolen goods each day to support their habits. Besides thanking the commissioners for the money to operate the program, Delhey also gave high praise to the law agencies who worked in it. He said particular praise is owed to Sheriff Douglas J. Harvey, Ann Arbor Police Chief Walter Krasny and Ypsilanti Police Chief Herbert Smith, plus the troopers at Ypsilanti's State Police Post.