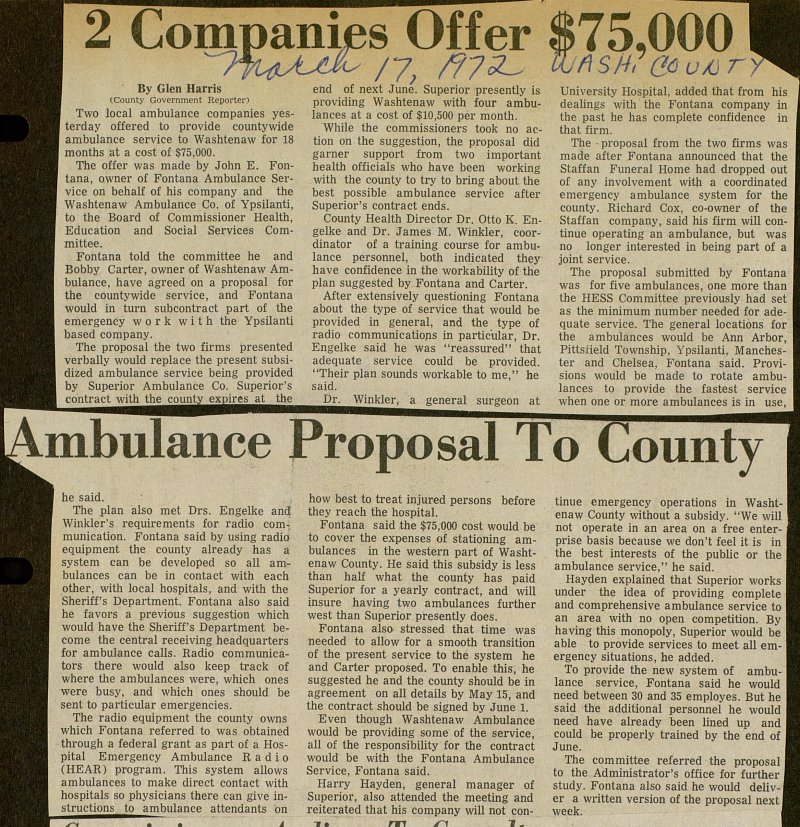 Two local ambulance companies yesterday offered to provide countywide ambulance service to Washtenaw for 18 months at a cost of $75,000. The offer was made by John E. Fontana, owner of Fontana Ambulance Service on behalf of his company and the Washtenaw Ambulance Co. of Ypsilanti, to the Board of Commissioner Health, Education and Social Services Committee. Fontana told the committee he and Bobby Carter, owner of Washtenaw Ambulance, have agreed on a proposal for the countywide service, and Fontana would in turn subcontract part of the emergency w o r k w i t h the Ypsilanti based company. The proposal the two firms presented verbally would replace the present subsidized ambulance service being provided by Superior Ambulance Co. Superior's contract with the county expires at the end of next June. Superior presently is providing Washtenaw with four ambulances at a cost of $10,500 per month. While the commissioners took no action on the suggestion, the proposal did garner support from two important health officials who have been working with the county to try to bring about the best possible ambulance service after Superior's contract ends. County Health Director Dr. Otto K. Engelke and Dr. James M. Winkler, coördinator of a training course for ambulance personnel, both indicated they have confidence in the workability of the plan suggested by Fontana and Carter. After extensively questioning Fontana about the type of service that would be provided in general, and the type of radio Communications in particular, Dr. Engelke said he was "reassured" that adequate service could be provided. "Their plan sounds workable to me," he said. Dr. Winkler, a general surgeon at University Hospital, added that from his dealings with the Fontana company in the past he has complete confidence in that firm. The -proposal from the two firms was made after Fontana announced that the Staffan Funeral Home had dropped out of any involvement with a coordinated emergency ambulance system for the county. Richard Cox, co-owner of the Staffan company, said his firm will continue operating an ambulance, but was no longer interested in being part of a joint service. The proposal submitted by Fontana was for five ambulances, one more than the HESS Committee previously had set as the minimum number needed for adequate service. The general locations for the ambulances would be Ann Arbor, Pittsiield Township, Ypsilanti, Manchester and Chelsea, Fontana said. Provisions would be made to rotate ambulances to provide the fastest service when one or more ambulances is in use, he said. The plan also met Drs. Engelke and Winkler's requirements for radio communication. Fontana said by using radio equipment the county already has a system can be developed so all ambulances can be in contact with each other, with local hospitals, and with the Sheriff's Department. Fontana also said he favors a previous suggestion which would have the Sheriff's Department become the central receiving headquarters for ambulance calis. Radio communicators there would also keep track of where the ambulances were, which ones were busy, and which ones should be sent to particular emergeneies. The radio equipment the county owns which Fontana referred to was obtained through a federal grant as part of a Hospital Emergency Ambulance Radio (HEAR) program. This system allows ambulances to make direct contact with hospitals so physicians there can give instructions to ambulance attendants on how best to treat injured persons before they reach the hospital. Fontana said the $75,000 cost would be to cover the expenses of stationing ambulances in the western part of Washtenaw County. He said this subsidy is less than half what the county has paid Superior for a yearly contract, and will insure having two ambulances further west than Superior presently does. Fontana also stressed that time was needed to allow for a smooth transition of the present service to the system he and Carter proposed. To enable this, he suggested he and the county should be in agreement on all details by May 15, and the contract should be signed by June 1. Even though Washtenaw Ambulance would be providing some of the service, all of the responsibility for the contract would be with the Fontana Ambulance Service, Fontana said. Harry Hayden, general manager of Superior, also attended the meeting and reiterated that his company will not tinue emergency operations in Washtenaw County without a subsidy. "We will not opérate in an area on a free enterprise basis beeause we don't feel it is in the best interests of the public or the ambulance service," he said. Hayden explained that Superior works under the idea of providing complete and comprehensive ambulance service to an area with no open competition. By having this monopoly, Superior would be able to provide services to meet all emergency situations, he added. To provide the new system of ambulance service, Fontana said he would need between 30 and 35 employés. But he said the additional personnel he would need have already been lined up and could be properly trained by the end of June. The committee referred the proposal to the Administrator's office for further I study. Fontana also said he would 1 er a written version of the proposal nextl week. I