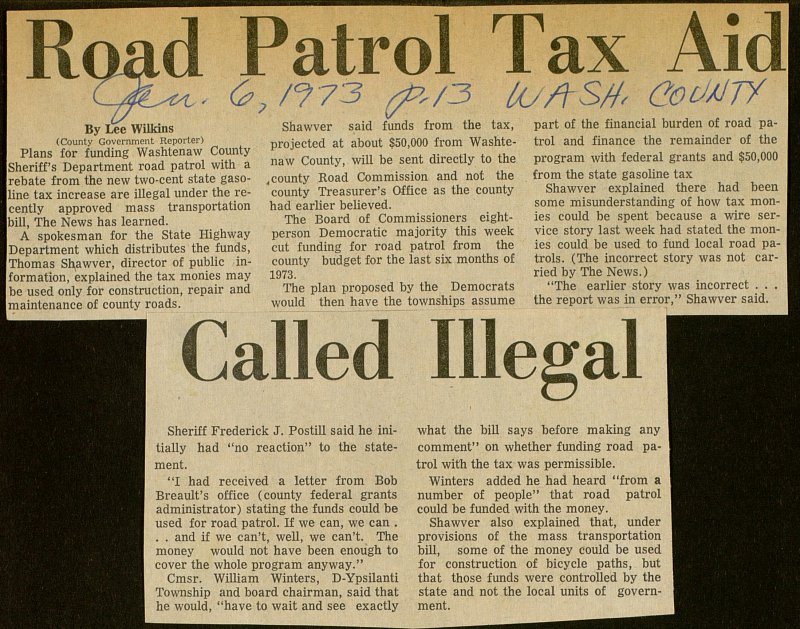 Plans for funding Washtenaw County Sheriff's Department road patrol with a rebate from the new two-cent state gasoline tax increase are illegal under the recently approved mass transportation bilí, The News has learned. A spokesman for the State Highway Department which distributes the funds, Thomas Shawver, director of public information, explained the tax monies may be used only for construction, repair and maintenance of county roads. Shawver said funds from the tax, projected at about $50,000 from Washtenaw County, will be sent directly to the county Road Commission and not the county Treasurer's Office as the county had earlier believed. The Board of Commissioners eightperson Democratie majority this week cut funding for road patrol from the county budget for the last six months of 1973. The plan proposed by the Democrats would then have the townships assume part of the financial burden of road patrol and finance the remainder of the program with federal grants and $50,000 from the state gasoline tax Shawver explained there had been some misunderstanding of how tax monies could be spent because a wire service story last week had stated the monies could be used to fund local road patrols. (The incorrect story was not carried by The News.) "The earlier story was incorrect . . . the report was in error," Shawver said. Sheriff Frederick J. Postill said he iniI tially had "no reaction" to the stateI ment. "I had received a letter f rom Bob I Breault's office (county federal grants I administrator) stating the funds could be I used for road patrol. If we can, we can . . . and if we can't, well, we can't. The money would not have been enough to I cover the whole program anyway." Cmsr. William Winters, D-Ypsilanti I Township and board chairman, said that I he would, "have to wait and see exactly what the bilí says before making any I comment" on whether funding road j trol with the tax was permissible. Winters added he had heard "f rom a number of people" that road patrol could be funded with the money. Shawver also explained that, under provisions of the mass transportation bill, some of the money could be used for construction of bicycle paths, but that those funds were controlled by the state and not the local units of government.