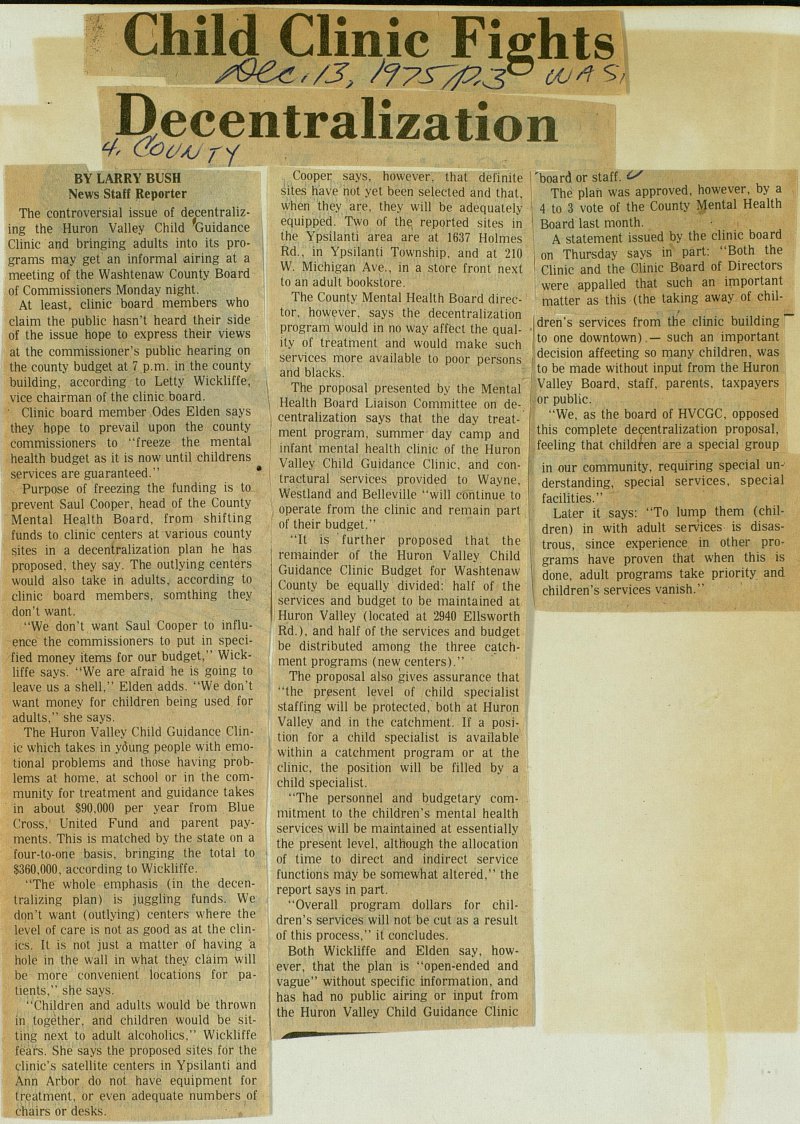 The controversial issue of decentralizing the Huron Valley Child Guidance Clinic and bringing adults into its programs may get an informal airing at a meeting of the Washtenaw County Board of Commissioners Monday night. At least, clinic board members who claim the public hasn't heard their side of the issue hope to express their views at the commissioner's public hearing on the county budget at 7 p.m. in the county building, according to Letty Wickliffe, vice chairman of the clinic board. Clinic board member Odes Elden says they hope to prevail upon the county commissioners to "freeze the mental health budget as it is now until childrens services are guaranteed." ' Purpose of freezing the funding is to prevent Saul Cooper, head of the County Mental Health Board, from shifting funds to clinic centers at various county sites in a decentralization plan he has proposed, they say. The outlying centers would also take in adults, according to clinic board members, somthing they don't want. "We don't want Saul Cooper to influence the commissioners to put in specified money items for our budget," Wickliffe says. "We are af raid he is going to leave us a shell," Elden adds. "We don't want money for children being used for adults," she says. The Huron Valley Child Guidance Clinic which takes in yöung people with emotional problems and those having problems at home, at school or in the community for treatment and guidance takes in about $90,000 per year from Blue Cross, United Fund and parent payments. This is matched by the state on a four-to-one basis, bringing the total to $360,000, according to Wickliffe. "The whole emphasis (in the decentralizing plan) is juggling funds. We don't want (outlying) centers where the level of care is not as good as at the clinics. It is not just a matter of having a hole in the wall in what they claim will be more convenient locations for patients," she says. "Children and adults would be thrown in logéther, and children would be sitting next to adult alcoholics." Wickliffe fèars. She says the proposed sites for the clinic'jS .satellite centers in Ypsilanti and Ann Arbor do not have equipment for treatment, or even adequate numbersof chairs or desks. Cooper says, however, that definite sites have not vet been selected and that, when they are, they will be adequately equipped. Two of the reported sites in the Ypsilanti área are at 1637 Holmes Rd., in Ypsilanti Township, and at 210 W. Michigan Ave., in a store front next to an adult bookstore. The County Mental Health Board director, however, says the decentralization program would in no way affect the quality of treatment and would make such services more available to ppor persons and blacks. The proposal presented by the Mental i Health Board Liaison Committee on decentralization says that the day treatment program, summer day camp and infant mental health clinic of the Huron Valley Child Guidance Clinic, and coni tractural services provided to Wayne, Westland and Belleville "will continue to opérate from the clinic and remain part of their budget." "It is 'further proposed that the remainder of the Huron Valley Child Guidance Clinic Budget for Washtenaw County be equally divided: half of the services and budget to be maintained at Huron Valley (located at 2940 Ellsworth Rd.), and half of the services and budget be distributed among the three catchment programs (new centers)." The proposal also gives assurance that "the present level of child specialist staffing will be protected, both at Huron Valley and in the catchmèn.t. If a position for a child specialist is available within a catchment program or at the clinic, the position will be filled by a child specialist. "The personnel and budgetary commitment to the children's mental health services will be maintained at essentially the present level, although the allocation of time to direct and indirect service functions may be somewhat altered," the report says in part. "Overall program dollars for children's services will not be cut as a result of this process," it concludes. Both Wickliffe and Elden say, however, that the plan is "open-ended and vague" without specific information, and has had no public airing or input from the Huron Valley Child Guidance Clinic 'board or staff . The plan was approved, however, by a 4 to 3 vote of the County Mental Health 1 Board last month. A statement issued by the clinic board on Thursday says in part: "Both the ' Clinic and the Clinic Board of Directors were appalled that such an important matter as this (the taking away of chilIdren's services from the clinic building" to one downtown) - such an important ' decisión affecting so many children, was ' to be made without input from the Huron Valley Board, staff, parents, taxpayers or public. "We, as the board of HVCGC, opposed this complete decentralization proposal, feeling that children are a special group in our community, requiring special understanding, special services, special facilities." Later it says: "To lump them (children) in with adult services is disastrous, since experience in other programs have proven that when this is done, adult programs take priority and children's services vanish."