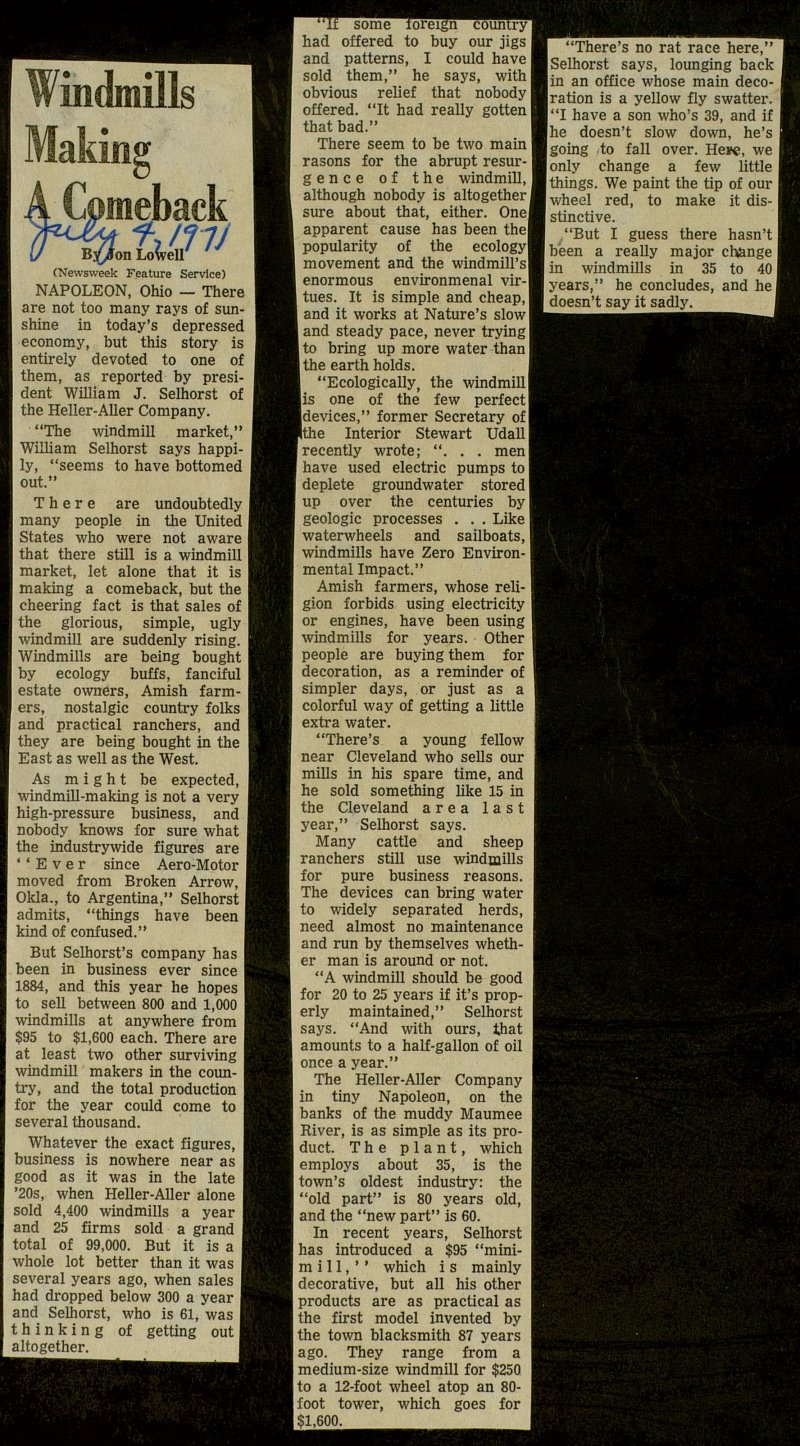 NAPOLEON, Ohio - There are not too many rays of sunshine in today's depressed economy, but this story is I entirely devoted to one of them, as reported by president William J. Selhorst of the Heller-Aller Company. "The windmill market," I William Selhorst says happily, "seems to have bottomed out." There are undoubtedly many people in the United States who were not aware that there still is a windmill market, let alone that it is I making a comeback, but the I cheering fact is that sales of the glorious, simple, ugly windmill are suddenly rising. Windmills are being bought I by ecology buffs, fanciful estate owners, Amish farmers, nostalgic country folks and practical ranchers, and they are being bought in the East as well as the West. As might be expected, windmill-making is not a very high-pressure business, and I nobody knows for sure what the industry-wide figures are. 'Ever since Aero-Motor moved from Broken Arrow, Okla., to Argentina," Selhorst I admits, "things have been kind of confused." But Selhorst's company has I been in business ever since 1884, and this year he hopes to sell between 800 and 1,000 windmills at anywhere from $95 to $1,600 each. There are at least two other surviving windmill makers in the country, and the total production for the year could come to several thousand. Whatever the exact figures, business is nowhere near as good as it was in the late I '20s, when Heller-Aller alone I sold 4,400 windmills a year and 25 firms sold a grand total of 99,000. But it is a whole lot better than it was several years ago, when sales had dropped below 300 a year I and Selhorst, who is 61, was I thinking of getting out altogether. " If some foreign country had offered to buy our jigs and patterns, I could have I I sold them," he says, with obvious relief that nobody offered. "It had really gotten that bad." There seem to be two main I I rasons for the abrupt 1 I gence of the windmill, I I although Bobody is altogetherl I sure about that, either. Onel I apparent cause has been thel I popularity of the ecologyl I movement and the windmill'sl ■ enormous environmenal virtues. It is simple and cheap, I I and it works at Nature's slowl I and steady pace, never trying I I to bring up more water than I ■ the earthholds. I f "Ecologically, the windmilll lis one of the few perfect! ■devices," former Secretary ofl ■the Interior Stewart Udalll ■ reeen tly wrote; ". . . menl ■ have used electric pumps to I I deplete groundwater stored I I up over the centuries by I I geologie processes . . . Like I I waterwheels and sailboats, I I windmills have Zero 1 I mental Impact." Amish farmers, whose 1 I gion forbids using electricity I I or engines, have been using I I windmills for years. Other I I people are buying them for I I decoration, as a reminder of I I simpler days, or just as a I I colorful way of getting a little I I extra water. f "There's a young fellow I I near Cleveland who sells our I I milis in his spare time, and I I he sold something Uke 15 in I I the Cleveland área last I I year," Selhorst says. Many cattle and sheep I I ranchers still use windmills I I for pure business reasons. I The devices can bring water I I to widely separated herds, I I need almost no maintenance I I and run by themselves I I er man is around or not. " k "A windmill should be good I I for 20 to 25 years if it's I I erly maintained," Selhorst I I says. "And with ours, that I I amounts to a half-gallon of oil I I once a year." I The Heller-Aller Company I I in tiny Napoleon, on the I I banks of the muddy Maumee River, is as simple as its I I duet. The plant, which I I employs about 35, is the I I town's oldest industry: the I I "oíd part" is 80 years oíd, I I and the "new part" is 60. j I ín recent years, Selhorst I I has introduced a $95 I ■ mili,'1 which i s mainly I I decorative, but all his other I I produets are as practical as I 1 the first model invented by I I the town blacksmith 87 years I I ago. They range from a I I medium-size windmill for $250 I ■ to a 12-foot wheel atop an I ■ foot tower, which goes for I $1OOJ "There's no rat race here," I ISelhorst says, lounging back I lin an office whose main I Iration is a yellow fly swatter. I I"I have a son who's 39, and if I Ihe doesn't slow down, he's 1 Igoing to f all over. Heie, we I lonly change a few little I Ithings. We paint the tip of our I I wheel red, to make it 1 I stinctive. "But I guess there hasn't I I been a really major change I I in windmills in 35 to 40 1 lyears," he concludes, and hel I doesn't say it sadly. I