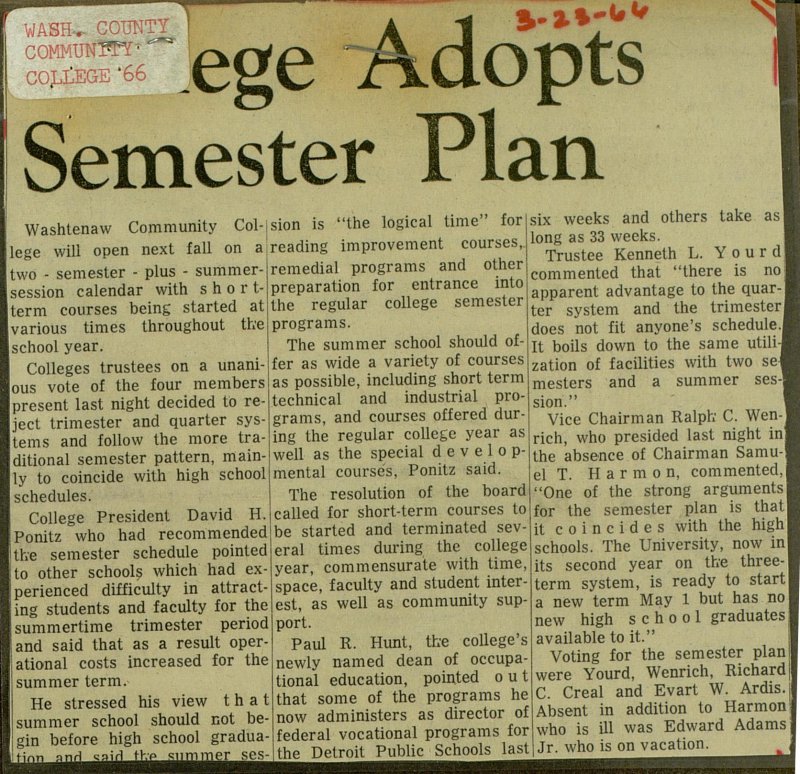 Washtenaw Community College will open next iall on a two - semester - plus - summersession calendar with shortterm courses being started at various times throughout the school year. Colleges trustees on a unanious vote of the four members present last night decided to reject trimester and quarter systems and follow the more traditional semester pattern, mainly to coincide with high school schedules. College President David H. Ponitz who had recommended the semester schedule pointed to other schools which had experienced difficulty in attracting students and faculty for the summertime trimester period and said that as a result operational costs increased for the summer term. He stressed his view that summer school should not begin before high school graduatinn anH cairl th'p Slimmer sion is "the logical time" for reading improvement courses,. remedial programs and other preparation for entrance into the regular college semester programs. The summer school should offer as wide a variety of courses as possible, including short term technical and industrial programs, and courses offered during the regular college year as well as the special d e v e 1 o pmental courses, Ponitz said. The resolution of the board called for short-term courses to be started and terminated several times during the college year, commensurate with time, space, faculty and student interest, as well as community support. Paul R. Hunt, the college's newly named dean of occupational education, pointed out that some of the programs he now administers as director of federal vocational programs for [the Detroit Public Schools last six weeks and others take as long as 33 weeks. Trustee Kenneth L. Yourd commented that "there is no apparent advantage to the quarter system and the trimester does not fit anyone's schedule.J It boils down to the same utilization of facilities with two semesters and a summer session." Vice Chairman Ralph C. Wenrich, who presided last night in the absence of Chairman Samuel T. Harmon, commented, "One of the strong arguments for the semester plan is that it coincides with the high schools. The University, now in its second year on the threeterm system, is ready to start a new term May 1 but has no new high school graduates available to it." Voting for the semester plan were Yourd, Wenrich, Richard C. Creal and Evart W. Ardis. Absent in addition to Harmon who is ill was Edward Adams Jr. who is on vacation.