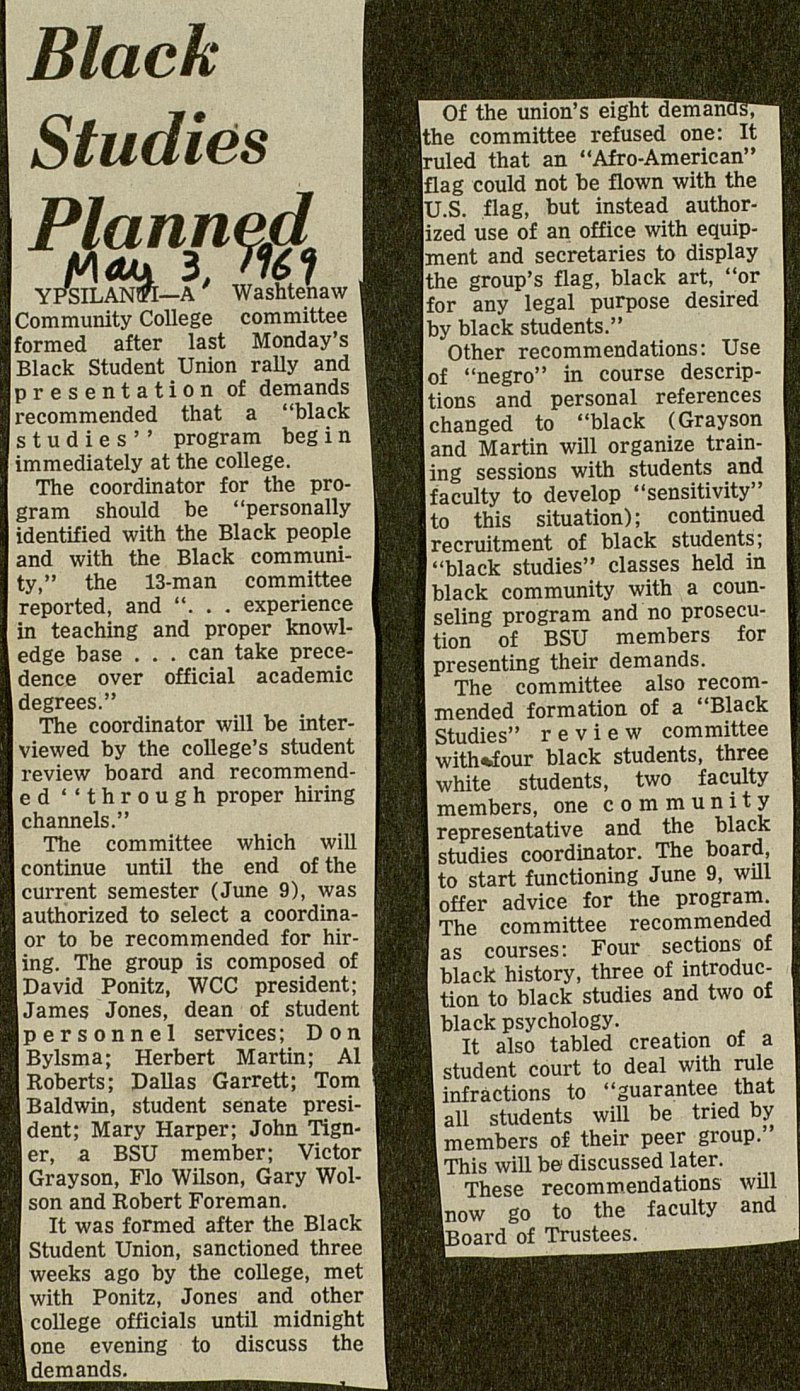 Ypsilanti - A Washtenaw Community College committee formed after last Monday's Black Student Union rally and presentation of demands recommended that a "black studies'' program beg in immediately at the college. The coordinator for the program should be "personally identified with the Black people and with the Black community," the 13-man committee reported, and ". . . experience in teaching and proper knowledge base ... can take precedence over official academic degrees." The coordinator will be interviewed by the college's student review board and recommended "through proper hiring channels." The committee which will i continue until the end of the current semester (June 9), was authorized to select a coordinator to be recommended for hiring. The group is composed of David Ponitz, WCC president; James Jones, deán of student personnel services ; Don Bylsma; Herbert Martin; Al Roberts; Dallas Garrett; Torn Baldwin, student senate president; Mary Harper; John Tigner, a BSU member; Victor Grayson, Flo Wilson, Gary Wolson and Robert Foreman. It was formed after the Black Student Union, sanctioned three weeks ago by the college, met with Ponitz, Jones and other I college officials until midnight lone evening to discuss the demands. Of the union's eight demands, - the committee refused one: It ruled that an "Afro-American" flag could not be flown with the U.S. flag, but instead authorized use of an office with equipment and secretaries to display the group's flag, black art, "or for any legal purpose desired by black students." Other recommendations: Use of "negro" in course descriptions and personal references changed to "black (Grayson and Martin will organize training sessions with students and faculty to develop "sensitivity" to this situation); continued recruitment of black students; "black studies" classes held i black community with a counseling program and no prosecution of BSU members for presenting their demands. The committee also recommended formation of a "Black Studies" review committee withLour black students, three white students, two faculty members, one community representative and the black studies coördinator. The board, to start functioning June 9, will offer advice for the program. The committee recommended as courses: Four sections of black history, three of introduction to black studies and two of black psychology. It also tabled creation of a student court to deal with rule infractions to "guarantee that all students will be tried by members of their peer group." This will be discussed later. These recommendations will now go to the faculty and Board of Trustees.