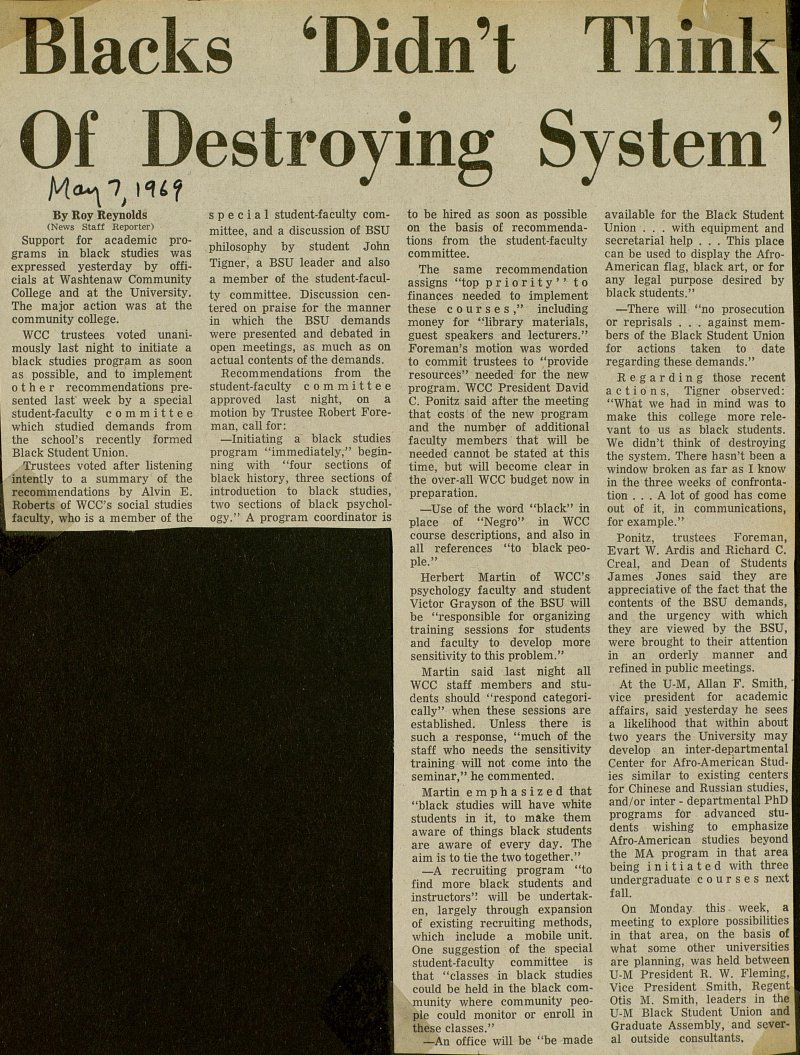 Support for academie programs in black studies was expressed yesterday by officials at Washtenaw Cómmunity College and at the University. The major action was at the cómmunity college. WCC trustees voted unanimously last night to initiate a black studies program as soon as possible, and to implement o t h e r recommendations presented last week by a special student-faculty committee which studied demands from the school's recently formed Black Student Union. Trustees voted after listening intently to a summary of the recommendations by Alvin E. Roberts of WCC's social studies faculty, who is a member of the special student-faculty committee, and a discussion of BSU philosophy by student John Tigner, a BSU leader and also a member of the student-faculty committee. Discussion centered on praise for the manner in which the BSU demands were presented and debated in open meetings, as much as on actual contents of the demands. Eecommendations from the student-faculty committee approved last night, on a motion by Trustee Robert Foreman, cali for: - Initiating a black studies program "immediately," beginning with "four sections of black history, three sections of introduction to black studies, two sections of black psychology." A program coördinator is to be hired as soon as possible on the basis of recommendations from the student-faculty committee. The same recommendation assigns "top priority'' to finances needed to implement these c o u r s e s ," including money for "library materials, guest speakers and lecturers." Foreman's motion was worded to commit trustees to "provide resources" needed for the new program. WCC President David C. Ponitz said after the meeting that costs of the new program and the number of additional faculty members that will be needed cannot be stated at this time, but will become clear in the over-all WCC budget now in preparation. -Use of the word "black" in place of "Negro" in WCC course descriptions, and also in all references "to black people." Herbert Martin of WCC's psychology faculty and student Victor Grayson of the BSU will be "responsible for organizing training sessions for students and faculty to develop more sensitivity to this problem." Martin said last night all WCC staff members and students should "respond categorically" when these sessions are established. Unless there is such a response, "much of the staff who needs the sensitivity training will not come into the seminar," he commented. Martin emphasized that "black studies will have white students in it, to make them aware of things black students are aware of every day. The aim is to tie the two together." - A recruiting program "to find more black students and instructors'! will be undertaken, largely through expansión of existing recruiting methods, which include a mobile unit. One suggestion of the special student-faculty committee is that "classes in black studies could be held in the black community where community people could monitor or enroll in these classes." - An office will be "be made available for the Black Student Union . . . with equipment and secretarial help . . . This place can be used to display the AfroAmerican flag, black art, or for any legal purpose desired by black students." - There will "no prosecution or reprisals . . . against members of the Black Student Union for actions taken to date regarding these demands." Begarding those recent actions, Tigner observed: "What we had in mind was to make this college more relevant to us as black students. We didn't think of destroying the system. There hasn't been a window broken as far as I know in the three weeks of confrontation ... A lot of good has come out of it, in Communications, for example." Ponitz, trustees Foreman, Evart W. Ardis and Richard C. Creal, and Dean of Students James Jones said they are appreciative of the fact that the contents of the BSU demands, and the urgency with which they are viewed by the BSU, were brought to their attention in an orderly manner and refined in public meetings. At the U-M, Alian F. Smith, ' vice president for academie affairs, said yesterday he sees a likeíihood that within about two years the University may develop an inter-departmental I Center for Afro-American Studies similar to existing centers for Chinese and Russian studies, andor inter - departmental PhD programs for advanced students wishing to emphasize Afro-American studies beyond the MA program in that área I being initiated with three undergraduate c o u r s e s next fall. On Monday this - week, a meeting to explore possibilities in that area, on the basis of what some other universities are planning, was held between U-M President R. W. Fleming, Vice President Smith, Regent Otis M. Smith, leaders in the U-M Black Student Union and Gradúate Assembly, and several outside consultants.