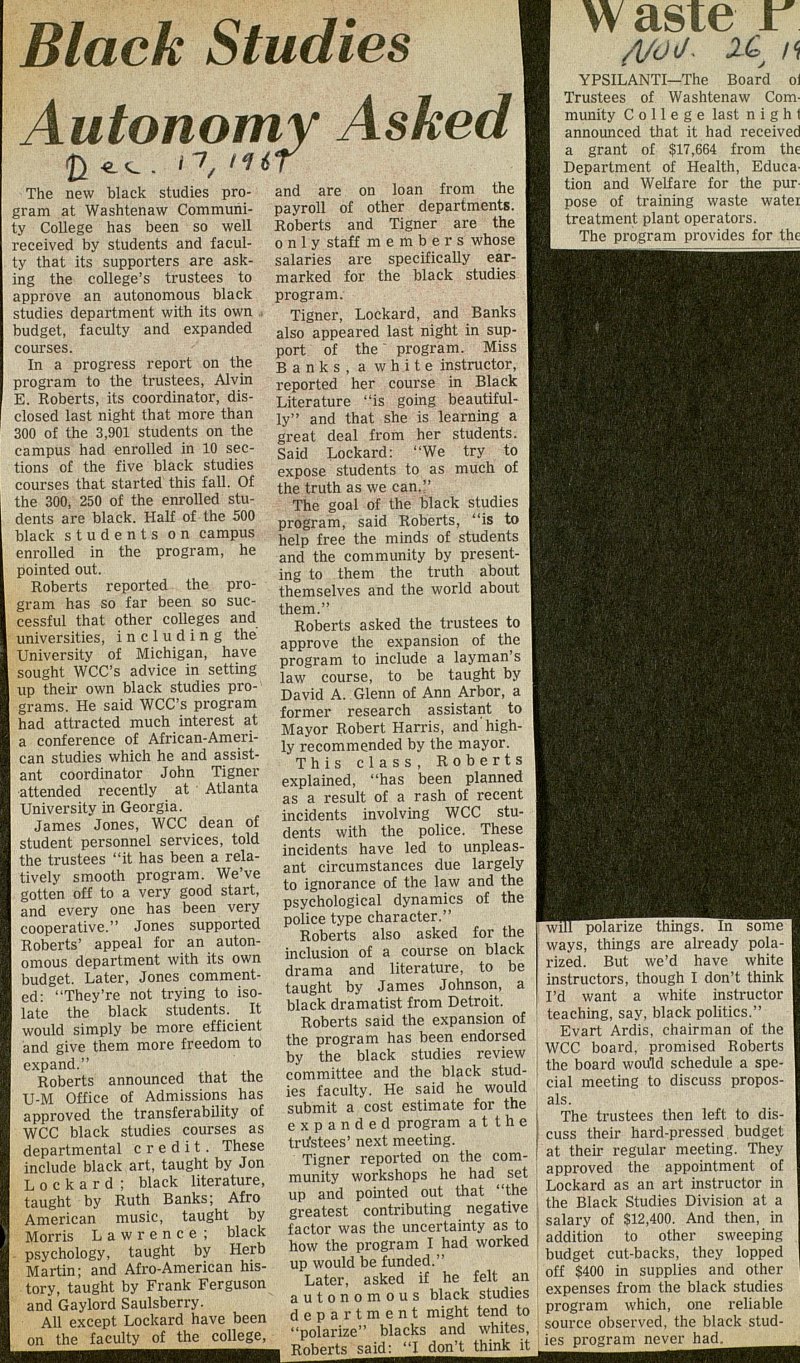 The new black studies program at Washtenaw Commuñity College has been so well received by students and faculty that its supporters are asking the college's trustees to approve an autonomous black studies department with its own ., budget, faculty and expanded courses. In a progress report on the program to the trustees, Alvin E. Roberts, its coördinator, disclosed last night that more than 300 of the 3,901 students on the campus had enrolled in 10 sections of the five black studies courses that started this fall. Of the 300, 250 of the enrolled students are black. Half of the 500 black students on campus enrolled in the program, he pointed out. Roberts reported the program has so far been so successful that other colleges and universities, i n c 1 u d i n g the University of Michigan, have sought WCC's advice in setting up their own black studies programs. He said WCC's program had attracted much interest at a conference of African-American studies which he and assistant coördinator John Tigner attended recently at ■ Atlanta University in Georgia. James Jones, WCC dean of student personnel services, told the trustees "it has been a relatively smooth program. We've gotten off to a very good start, and every one has been very cooperative." Jones supported Roberts' appeal for an autonomous department with its own budget. Later, Jones commented: "They're not trying to isolate the black students. It would simply be more efficiënt and give them more freedom to exDand." Roberts announced that the U-M Office of Admissions has approved the transferabüity of WCC black studies courses as departmental credit. These include black art, taught by Jon Lockard; black literature, taught by Ruth Banks; Afro American music, taught by Morris Lawrence; black psychology, taught by Herb Martin; and Afro-American history, taught by Frank Ferguson and Gaylord Saulsberry. All except Lockard have been on the faculty of the college, and are on loan from the payroll of other departments. Roberts and Tigner are the o n 1 y staff m e m b e r s whose salaries are specifically earmarked for the black studies program. Tigner, Lockard, and Banks also appeared last night in support of the " program. Miss Banks, a white instructor, reported her course in Black Literature "is going beautifully" and that she is learning a great deal from her students. Said Lockard: "We try to exposé students to as much of the truth as we can." The goal of the black studies program, said Roberts, "is to help free the minds of students and the community by presenting to them the truth about themselves and the world about them." Roberts asked the trustees to approve the expansión of the program to include a layman's law course, to be taught by David A. Glenn of Ann Arbor, a former research assistant to Mayor Robert Harris, and highly recommended by the mayor. This class, Roberts explained, "has been planned as a result of a rash of recent incidents involving WCC students with the pólice. These incidents have led to unpleasant circumstances due largely to ignorance of the law and the psychological dynamics of the pólice type character." Roberts also asked for the inclusión of a course on black drama and literature, to be taught by James Johnson, a black dramatist from Detroit. Roberts said the expansión of the program has been endorsed by the black studies review committee and the black studies faculty. He said he would submit a cost estimate for the expanded program a t t h e trastees' next meeting. Tigner reported on the community workshops he had set up and pointed out that "the greatest contributing negative factor was the uncertainty as to how the program I had worked up would be funded." Later, asked if he feit an autonomous black studies department might tend to "polarize" blacks and whites, - TRnhprts said: "I don't think it will polarize things. In some ways, things are already polarized. But we'd have white instructors, though I don't think I'd want a white instructor teaching, say, black politics." Evart Ardis, chairman of the WCC board, promised Roberts the board would schedule a special meeting to discuss proposals. The trustees then left to discuss their hard-pressed budget at their regular meeting. They approved the appointment of Lockard as an art instructor in the Black Studies División at a salary of $12,400. And then, in addition to other sweeping budget cut-backs, they lopped off $400 in supplies and other expenses from the black studies program which, one reliable source observed, the black studies program never had.