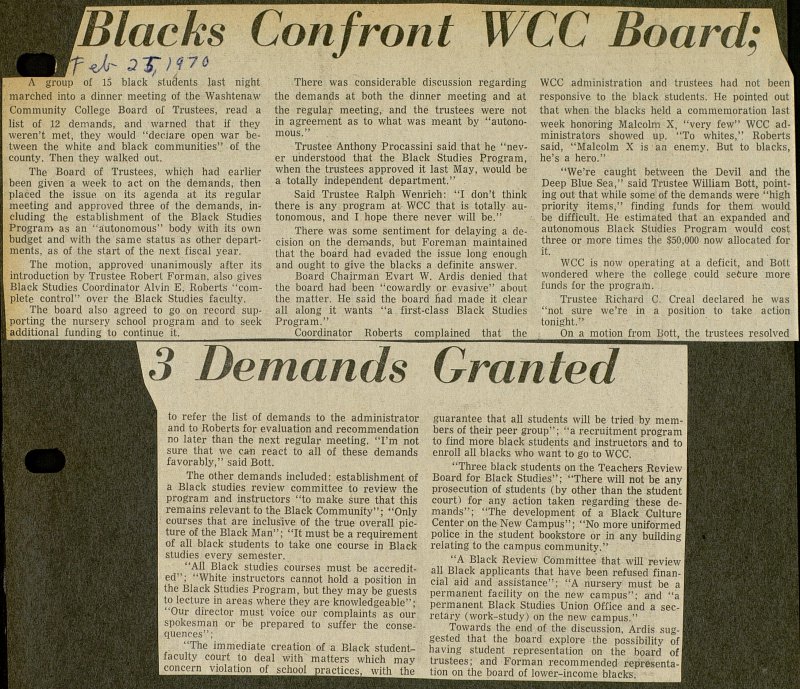 A group of 15 black sludents last night marched into a dinner meeting of the Washtenaw Community College Board of Trustees, read a list of 12 demands, and warned that if they weren't met, they would "deciare open war between the white and black communities" of the county. Then they walked out. The Board of Trustees, which had earlier been given a week to act on the demands, then placed the issue on its agenda at its regular meeting and approved three of the demands, including the establishment of the Black Studies Program as an "autonomous" body with its own budget and with the same status as other departments, as of the start of the next fiscal year. The motion, approved unanimously after its introduction by Trustee Robert Forman, also gives Black Studies Coördinator Alvin E. Roberts "complete control" over the Black Studies faculty. The board also agreed to go on record supporting the nursery school program and to seek additional funding to continue it. There was considerable discussion regarding the demands at both the dinner meeting and at the regular meeting, and the trustees were not in agreement as to what was meant by "autonomous." Trustee Anthony Procassini said that he "never uhderstood that the Black Studies Program, when the trustees approved it last May, would be a totally independent department." Said Trustee Ralph Wenrich: "I don't think there is any program at WCC that is totally autonomous, and I hope there never will be." There was some sentiment, for delaying a decisión on the demands, but Foreman maintained that the board had evaded the issue long enough and ought to give the blacks a definite answer. Board Chairman Evart W. Ardis denied that the board had been "cowardly or eyasive" about the matter. He said the board had made it clear all along it wants "a first-class Black Studies Program." Coördinator Roberts complained that the WCC administration and trustees had not been responsive to the black students. He pointed out that when the blacks held a commemoration last week honoring Malcolm X, "very few" WCC administrators showed up. "To whites," Roberts said, "Malcolm X is an enemy. But to blacks, he's a hero." "We're caught between the Devil and the Deep Blue Sea," said Trustee William Bott, pointing out that while some of the demands were "high priority items," finding funds for them would be difficult. He estimated that an expanded and autonomous Black Studies Program would cost three or more times the $50,000 now allocated for it. WCC is now operating at a deficit, and Bott wondered where the college could secure more funds for the program. Trustee Richard C. Creal declared he was "not sure we're in a position to take action tonight." On a motion from Bott, the trustees resolved to refer the list of demands to the administrator and to Roberts for evaluation and recommendation no later than the next regular meeting. "Fm not sure that we ca-n react to all of these demands favorably," said Bott. The other demands included: establishment of a Black studies review committee to review the program and instructors "to make sure that this remains relevant to the Black Community"; "Only courses that are inclusive of the true overall picture of the Black Man"; "It must be a requirement of all black students to take one course in Black studies every semester. "All Black studies courses must be accredited"; "White instructors cannot hold a position in the Black Studies Program, but they may be guesls to lecture in areas where they are knowledgeable"; "Our director must voice our complaints as our spokesman or be prepared to suffer the conseciuenees"; "The immediate creation of a Black studentfaculty court to deal with matters which may concern violation of school practices, with the guarantee that all students will be tried by members of their peer group"; "a recruitment program to find more black students and instructors and to enroll all blacks who want to go to WCC. "Three black students on the Teachers Review Board for Black Studies"; "There will not be any prosecution of students (by other than the student courO for any action taken regarding these demands"; "The development of a Black Culture Center on the New Campus"; "No more uniformed pólice in the student bookstore or in any building reiating to the campus community." "A Black Review Committee that will review all Black applicants that have been refused financial aid and assistance"; "A nursery must be a permanent facility on the new campus"; and "a permanent Black Studies Union Office and a secretary (work-study) on the new campus." Towards the end of the discussion, Ardis suggested that the board explore the possibility of I ha ving student representation on the board of I trustees; and Forman recommended reprêsenta-l tion on the board of lower-income blacks.