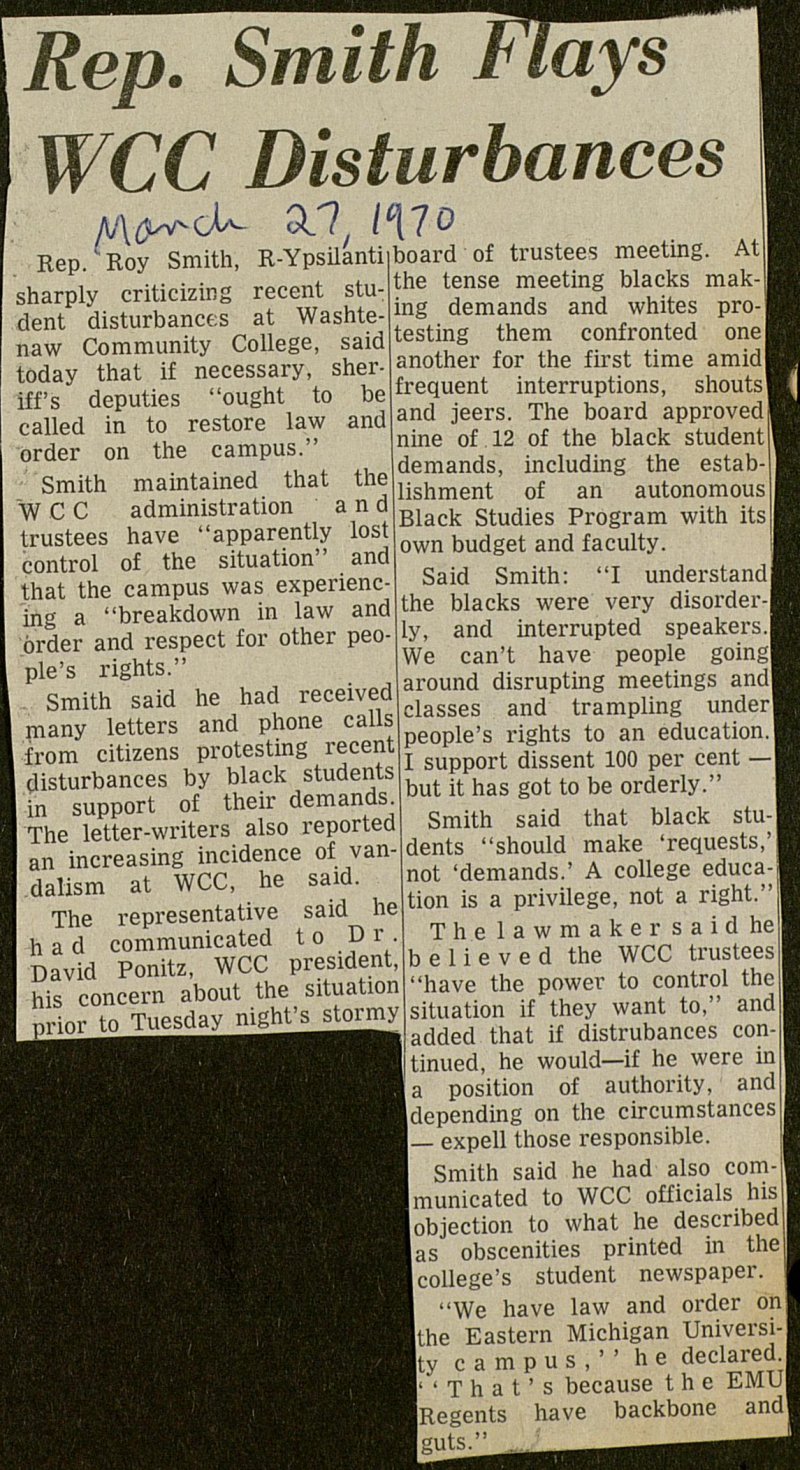 Rep. Roy Smith, R-Ypsilanti sharply criticizing recent stu: dent disturbances at Washtenaw Community College, said today that if necessary, sheriff's deputies "ought to be called in to restore law and order on the campus." Smith maintained that the W C C administration and trustees have "apparently losl control of the situation" and that the campus was experiencing a "breakdown in law and order and respect for other peo Dle's rights." Smith said he had received many letters and phone calis from citizens protesting recent disturbances by black students in support of their demands. The letter-writers also reported an increasing incidence of vandalism at WCC, he said. The representative said he had communicated t o Dr David Ponitz, WCC president his concern about the situatio rrior to Tuesday night's storm oard of trustees meeting. At ie tense meeting blacks mak- ng demands and whites pro-1 esting them confronted one nother for the first time amid requent interruptions, shouts! and jeers. The board approved nine of 12 of the black student demands, including the estab-' lishment of an autonomous Black Studies Program with its own budget and faculty. Said Smith: "I understand the blacks were very disorderly, and interrupted speakers. We can't have people going around disrupting meetings andl classes and trampling underl people's rights to an education.l [ support dissent 100 per cent - but it has got to be orderly." Smith said that black students "should make 'requests,' not 'demands.' A college education is a privilege, not a right." Thelawmakersaidhe b e 1 i e v e d the WCC trustees "have the power to control the situation if they want to," and added that if distrubances continued, he would- if he were in a position of authority, and depending on the circumstances I- expelí those responsible. Smith said he had also communicated to WCC officials his objection to what he descnbed las obscenities printed in the Icollege's student newspaper. I "We have law and order on the Eastern Michigan University campus," h e declared " T h a t ' s because t h e EMU Regents have backbone and ' " i-