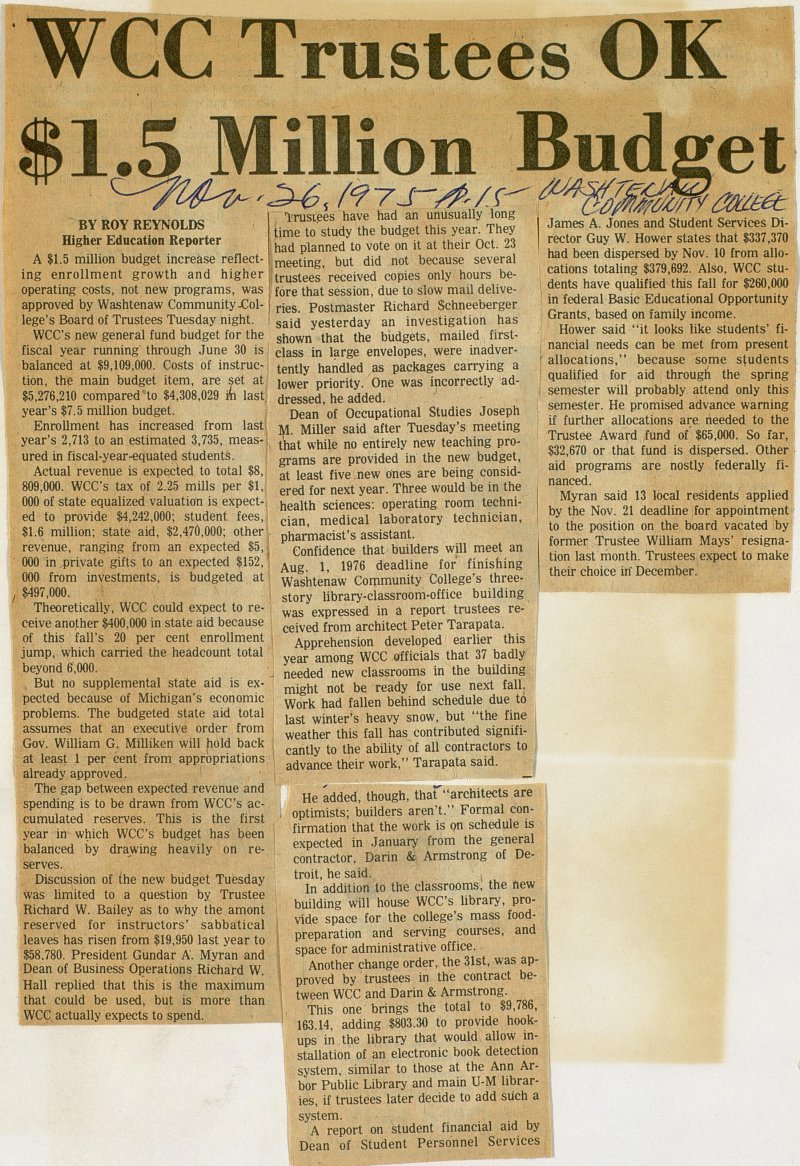 A $1.5 million budget increase reflecting enrollment growth and higher operating costs, not new programs, was approved by Washtenaw Community-College's Board of Trustees Tuesday night. WCC's new general fund budget for the fiscal year running through June 30 is balanced at $9,109,000. Costs of instruction, the main budget item, are set at $5,276,210 compared'to $4,308,029 ik last, year 's $7.5 million budget. Enrollment has increased f rom last year's 2,713 to an estimated 3,735, meas-, ured in fiscal-year-equated students. Actual revenue is expected to total $8, 809,000. WCC's tax of 2.25 milis per $1, 000 of state equalized valuation is expected to provide $4,242,000; student fees, $1.6 million; state aid, $2,470,000; other, revenue, ranging f rom an expected $5,j 000 in private gifts to an expected $152, 000 f rom investments, is budgeted at $497,000. Theoretically, WCC could expect to receive another $400,000 in state aid because of this fall's 20 per cent enrollment jump, which carried the headcount total beyond ö'.OOO. . But no supplemental state aid is 1 pected because of Michigan's economie problems. The budgeted state aid total assumes that an executive order from Gov. William G. Milliken will hold back at least 1 per cent from appröpriations already approved. The gap between expected revenue and spending is to be drawn from WCC's accumulated reserves. This is the first year in which WCC's budget has been balanced by drawing heavily on reserves. Discussion of the new budget Tuesday was limited to a question by Trustee Richard W. Bailey as to why the amont reserved for instructors' sabbatical leaves has risen from $19,950 last year to $58.780. President Gundar A'. Myran and Dean of Business Operations Richard W. Hall replied that this is the maximum that could be used, but is more than WCC actually expects to spend. Trusi.ees have had an unusually long time to study the budget this year. They had planned to vote on it at their Oct. 23 meeting, but did not because several trustees received copies only hours beföre that session, due to slow mail deliveries. Postmaster Richard Schneeberger said yesterday an investigation has shown that the budgets, mailed firstclass in large envelopes, were inadvertently handled as packages carrying a lower priority. One was incorrectly addressed, he added. Dean of Occupational Studies Joseph 1(1. Miller said after Tuesday's meeting that while no entirely new teaching programs are provided in the new budget, at least five.new ones are being considered for next year. Three would be in the health sciences: operating room technician, medical laboratory technic-ian, pharmacist's assistant. Confidence that builders will meet an Aug. 1, 1976 deadline for finishing Washtenaw Community College's threestory library-classroom-office building was expressed in a report trustees received from architect Peter Tarapata. Apprehension developed earlier this year among WCC officials that 37 badly ; needed new classrooms in the building might not be. ready for use next f all. Work had fallen behind schedule due to last winter's heavy snow, but "the fine weather this fall has contributed significantly to the ability of all contractors to advance their work," Tarapata said. He added, though, that "architects are optimists; builders aren't." Formal confirmation that the work is on schedule is expected in January from the general contractor, Darin & Armstrong of Detroit, he said. In addition to the classro.oms, the iiew building will house WCC's library, provide space for the college's mass foodpreparation and serving courses, and space for administrative office. Another change order, the 31st, was approved by trustees in the contract between WCC and Darin & Armstrong. This one brings the total to $9,786, 163.14, adding $803.30 to provide hookups in the library that would allow installation of an electronic book detection system, similar to those at the Ann Arbor Public Library and main U-M libraries, if trustees later decide to add süch a system. A report on student financial aid by Dean of Student Personnel Services James A. Jones and Student Services Director Guy W. Hower states that $337,370 had been dispersed by Nov. 10 from allocations totaling $379,692. Also, WCC students have qualified this fall for $260,000 in federal Basic Educational Opportunity Grants, based on family income. Hower said "it looks like students' financial needs can be met from present allocations," because some students qualified for aid through the spring semester will probably attend only this semester. He promised advance warning if further allocations are needed to the Trustee Award fund of' $65,000. So far, $32,670 or that fund is dispersed. Other aid programs are nostly federally financed. Myran said 13 local residente applied by the Nov. 21 deadline for appointment to the position on the board vacated by former Trustee William Mays' resignation last month. Trustees expect to make their choice in' December.