February Is Called 'driest Since 1877' 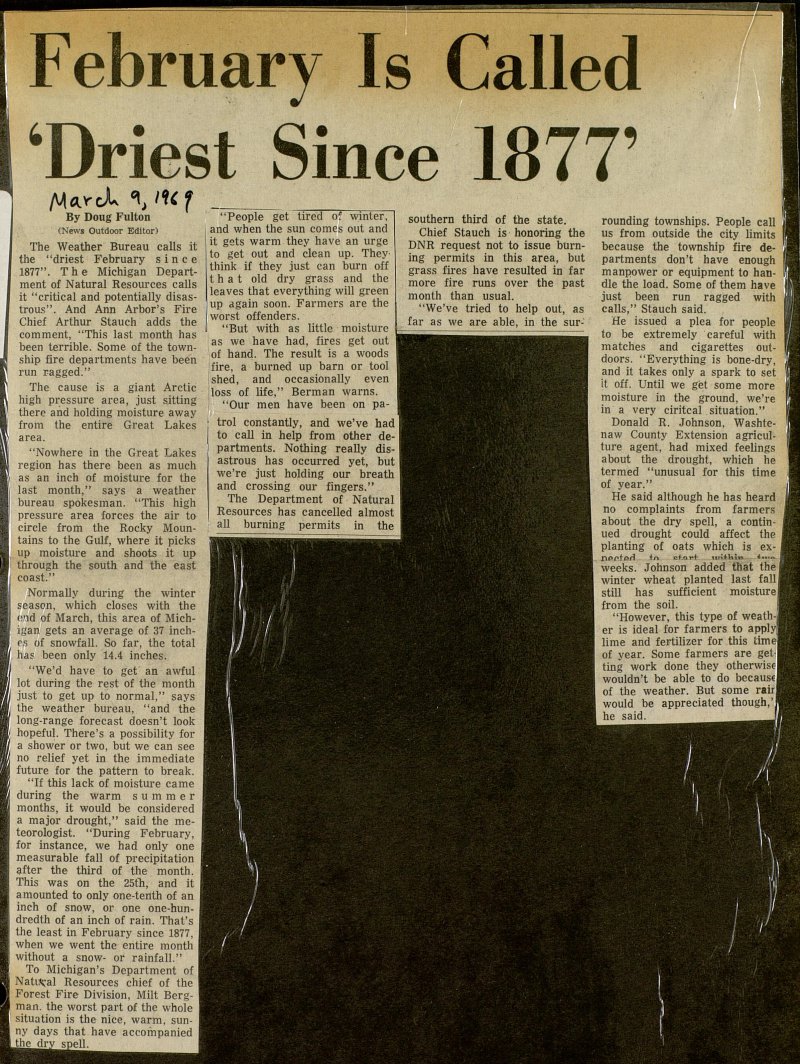 The Weather Bureau calis it the "driest February s i n c e 1877". The Michigan Department of Natural Resources calis it "critical and potentially disastrous". And Ann Arbor's Fire Chief Arthur Stauch adds the comment, "This last month has been terrible. Some of the township fire departments have been run ragged." The cause is a giant Arctic high pressure area, just sitting there and holding moisture away from the entire Great Lakes area. "Nowhere in the Great Lakes región has there been as much as an inch of moisture for the last month," says a weather bureau spokesman. "This high pressure area forces the air to circle from the Rocky Mountains to the Gulf, where it picks up moisture and shoots it up through the south and the east coast." Normally during the winter season, which closes with the end of March, this area of Michigan gets an average of 37 inches of snowfall. So far, the total has been only 14.4 inches. "We'd have to get an awful lot during the rest of the month just to get up to normal," says I the weather bureau, "and the long-range forecast doesn't look hopeful. There's a possibility for a shower or two, but we can see no relief yet in the immediate future for the pattern to break. I "If this lack of moisture carne I during the warm s u m m e r I months, it would be considered I a major drought," said the I teorologist. "During February, I for instance, we had only one I measurable fall of precipitation I after the third of the month. I This was on the 25th, and it I amounted to only one-tenth of an I inch of snow, or one I dredth of an inch of rain. That's I the least in February since 1877, I when we went the entire month I without a or rainfall." To Michigan's Department of I NatiJcal Resources chief of the I Forest Fire División, Milt I man. the worst part of the whole I situation is the nice, warm, I ny days that have accompanied I _the_dry spell. I "People get tired of winter, and when the sun comes out and it gsts warm they have an urge to get out and clean up. Theythink if they just can burn off t h a t old dry grass and the leaves that everything will green up again soon. Farmers are the worst offenders. "But with as little moisture as we have had, fires get out of hand. The result is a woods fire, a burned up barn or tooi shed, and occasionally even loss of life," Berman warns. "Our men have been on paj trol constantly, and we've had to cali in help from other departments. Nothing really disastrous has occurred yet, but we're just holding our breath and crossing our fingers." The Department of Natural Resources has cancelled almost all burning permits in the - - "' southern third of the state. Chief Stauch is honoring the DNR request not to issue burning permits in this area, but grass fires have resulted in far more fire runs over the past month than usual. "We've tried to help out, as far as we are able, in the 1 rounding townships. People cali I us from outside the city limits [1 because the township fire M partments don't have enough I manpower or equipment to Ijl die the load. Some of them have just been run ragged with j calis," Stauch said. He issued a plea for people I to be extremely careful with I matches and cigarettes (I doors. "Everything is bone-dry, J and it takes only a spark to set I it off. Until we gët some more moisture in the ground, we're I in a very ciritcal situation." H Donald R. Johnson, 'J naw County Extensión H i ture agent, had mixed feelings 1 about the drought, which he termed "unusual for this time of year." I He said although he has heard 1 no complaints from farmers ■ I about the dry spell, a I I ued drought could affect the I I planting of oats which is H I weeks. Johnson added that theB I winter wheat planted last fallH I still has sufficient moistureH I from the soil. "However, this type of weath-B I er is ideal for farmers to applyjB I linie and fertilizer for this time I of year. Some farmers are gel-B I ting work done they otherwiseB I wouldn't be able to do becauseH I of the weather. But some rairB I would be appreciated though.'HJ he said. _Jfl