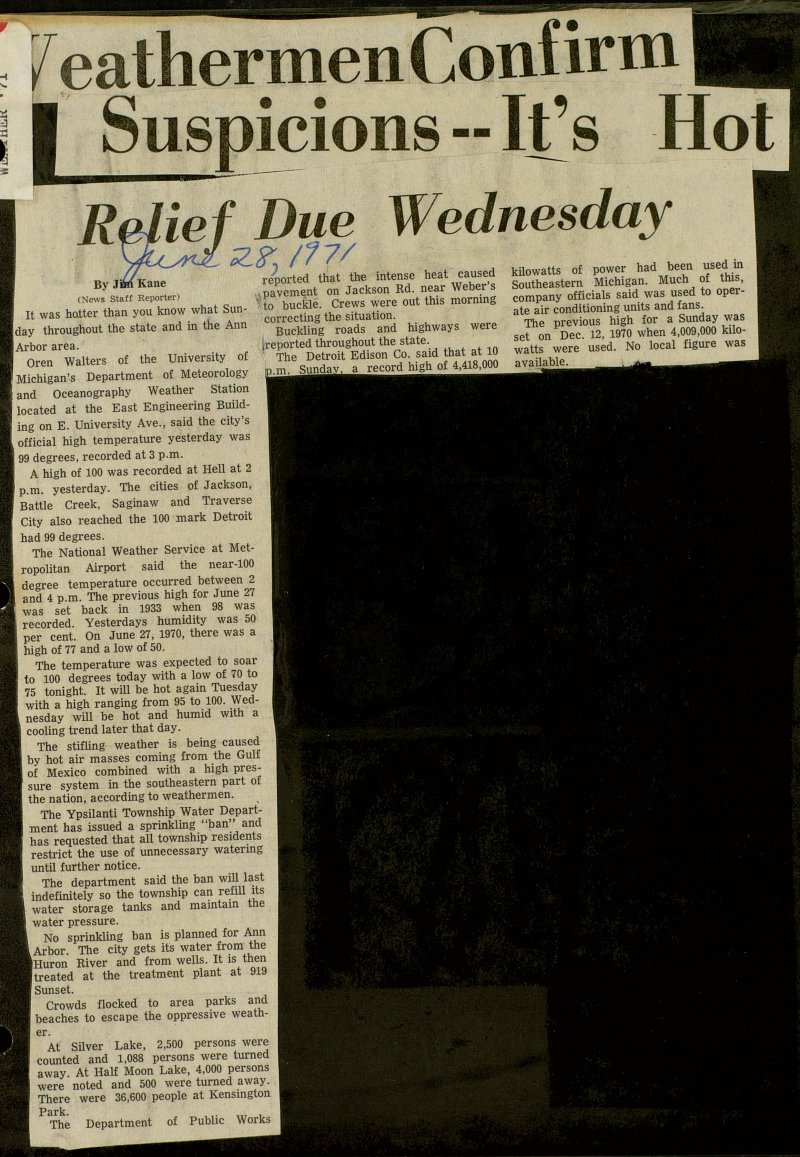 It was halter than you know what Sunday throughout the state and in the Ann Arbor area. Oren Walters of the University of 'Michigan's Department of Meteorology and Oceanography Weather Station located at the East Engineering Building on E. University Ave., said the city's official high temperature yesterday was 99 degrees, recorded at 3 p.m. A high of 100 was recorded at Heil at 2 I p.m. yesterday. The cities of Jackson, Battle Creek, Saginaw and Traverse City also reached the 100 mark Detroit had 99 degrees. The National Weather Service at Metropolitan Airport said the near-100 I degree temperature occurred between 2 I and 4 p.m. The previous high for June 27 I was set back in 1933 when 98 was recorded. Yesterdays humidity was 50 per cent. On June 27, 1970, there was a high of 77 and a low of 50. ) The temperature was expected to soar I to 100 degrees today with a low of 70 to I 75 tonight. It will be hot again Tuesday I with a high ranging from 95 to 100. I 1 nesday will be hot and humid with a I I cooling trend later that day. 1 The stifling weather is being caused I by hot air masses coming from the Gulf I of Mexico combined with a high pressure system in the southeastern part of I the nation, according to weathermen. The Ypsilanti Township Water Department has issued a sprinkling "ban" and I has requested that all township residents I restrict the use of unnecessary watering I until further notice. The department said the ban will last I indefinitely so the township can refill lts water storage tanks and maintain the water pressure. No sprinkling ban is planned for Ann Arbor. The city gets its water from the Huron River and from wells. It is then treated at the treatment plant at 919 Sunset. Crowds flocked to area parks and I beaches to escape the oppressive weath' At Süver Lake, 2,500 persons were I counted and 1,088 persons were turned í I away At Half Moon Lake, 4,000 persons I were noted and 500 were turned away. ■,.. I There were 36,600 people at Kensmgton Park The Department of Public Works reported that the intense heat caused .pavement on Jackson Rd. near Weber s to buckle. Crews were out this morning correcting the situation. Buckling roads and highways were reported throughout the state. ' The Detroit Edison Co. said that at 10 m m. Sundav, a record high of 4,418,000 kilowatts of power had been used in Southeastern Michigan. Much of this, company officials said was used to opérate air conditioning units and fans. The previous high for a Sunday was set on Dec. 12, 1970 when 4,009,000 kilowatts were used. No local figure was availabls. . .ji - ■■m