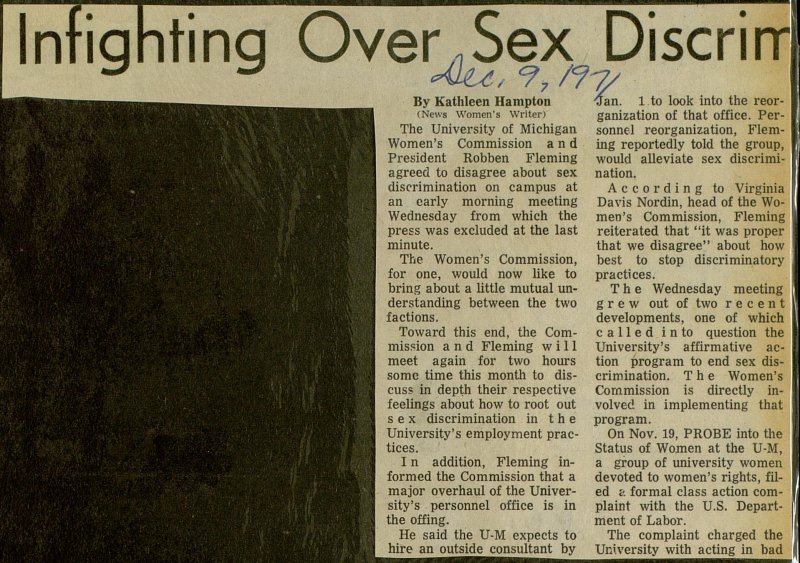 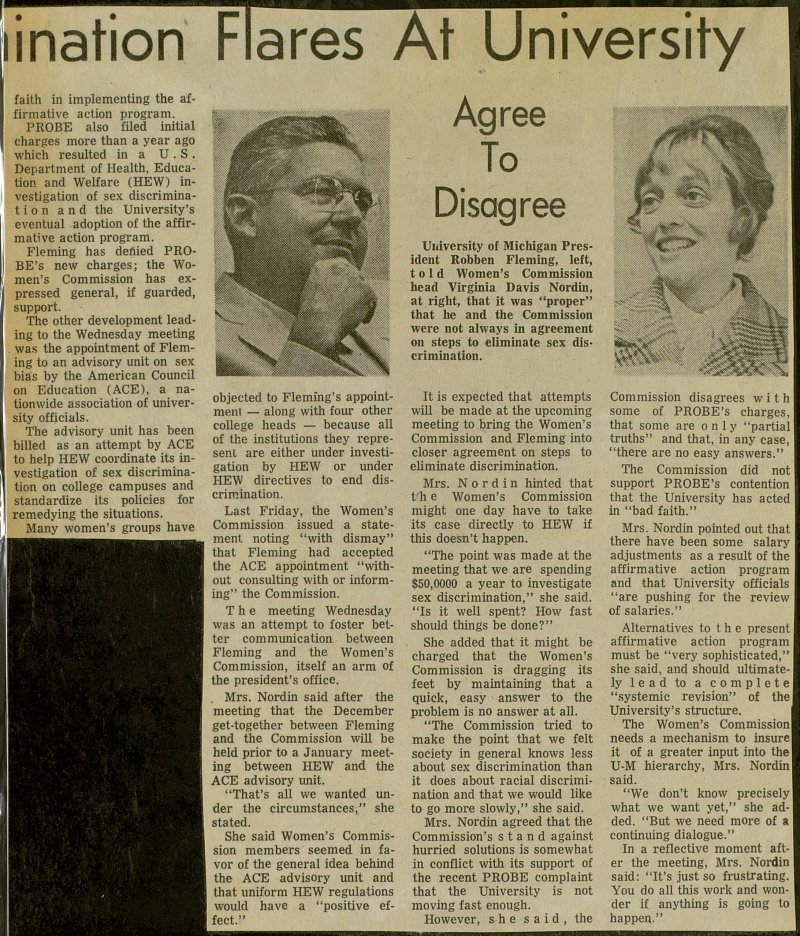 The University of Michigan Women's Commission and President Robben Fleming agreed to disagree about sex discrimination on campus at an early morning meeting Wednesday from which the press was excluded at the last minute. The Women's Commission, for one, would now like to bring about a little mutual understanding between the two factions. Toward this end, the Commission and Fleming w i 1 1 meet again for two hours some time this month to discuss in depth their respective feelings about how to root out sex discrimination in the University's employment practices. I n addition, Fleming informed the Commission that a major overhaul of the University's personnel office is in the offing. He said the U-M expects to hire an outside consultant by fan. l.to look into the reorganization of that office. Personnel reorganization, Fleming reportedly told the group, would alleviate sex discrimination. According to Virginia Davis Nordin, head of the Women's Commission, Fleming reiterated that "it was proper that we disagree" about how best to stop discriminatory practices. The Wednesday meeting g r e w out of two recent developments, one of which called into question the University's affirmative action program to end sex discrimination. The Women's Commission is directly involved in implementing that program. On Nov. 19, PROBE into the Status of Women at the U-M, a group of university women devoted to women's rights, filed a formal class action complaint with the U.S. Department of Labor. The complaint charged the Universitv with actine in bad faith in implementing the affirmative action program. PROBE also filed initial charges more than a year ago which resulted in a U.S. Department of Health, Education and Welfare (HEW) investigation of sex discriminat i o n and the University's eventual adoption of the affirmative action program. Fleming has denied PROBE's new charges; the Women's Commission has expressed general, if guarded, support. The other development leading to the Wednesday meeting was the appointment of Fleming to an advisory unit on sex bias by the American Council on Education (ACE), a nationwide association of university officials. The advisory unit has been billed as an attempt by ACE to help HEW coordinate its investigation of sex discrimination on college campuses and standardize its policies for remedying the situations. Many women's groups have objected to Flemïng's appointmenl - along with four other college heads - because all of the institutions they represeni are either under investigation by HEW or under HEW directives to end discrimina tion. Last Friday, the Women's Commission issued a statement noting "with dismay" I that Fleming had accepted the ACE appointment "without Consulting with or informing" the Commission. The meeting Wednesday was an attempt to foster better communication between Fleming and the Women's Commission, itself an arm of the president's office. Mrs. Nordin said af ter the meeting that the December get-together between Fleming and the Commission will be held prior to a January meeting between HEW and the ACE advisory unit. "That's all we wanted under the circumstances," she stated. I She said Women's CommisI sion members seemed in faI vor of the general idea behind I the ACE advisory unit and I that uniform HEW regulations I would have a "positive efI fect." It is expected that attempts will be made at the upcoming meeting to bring the Women's Commission and Fleming into closer agreement on steps to elimínate discrimination. Mrs. N o r d i n hinted that t'h e Women's Commission might one day have to take its case direcüy to HEW if this doesn't happen. "The point was made at the meeting that we are spending $50,0000 a year to investígate sex discrimination," she said. "Is it well spent? How f ast should things be done?" She added that it might be charged that the Women's Commission is dragging its feet by maintaining that a quick, easy answer to the problem is no answer at all. "The Commission tried to make the point that we feit society in general knows less about sex discrimination than it does about racial discrimination and that we would like to go more slowly," she said. Mrs. Nordin agreed that the Commission's stand against hurried solutions is somewhat in conflict with its support of the recent PROBE complaint that the University is not moving fast enough. However, she said, the Commission disagrees with some of PROBE's charges, that some are o n 1 y "partial truths" and that, in any case, "there are no easy answers." The Commission did not support PROBE's contention that the University has acted in "bad faith." Mrs. Nordin pointed out that there have been some salary adjustments as a result of the affirmative action program and that University officials "are pushing for the review of salaries." Alternatives to t h e present affirmative action program must be "very sophisticated," she said, and should ultimately lead to a complete "systemic revisión" of the University's structure. The Women's Commission needs a mechanism to insure it of a greater input into the U-M hierarchy, Mrs. Nordin said. "We don't know precisely what we want yet," she added. "But we need more of a continuing dialogue." In a reflective moment after the meeting, Mrs. Nordin said: "It's just so frustrating. You do all this work and wonder if anything is going to happen" Agree To Disagree