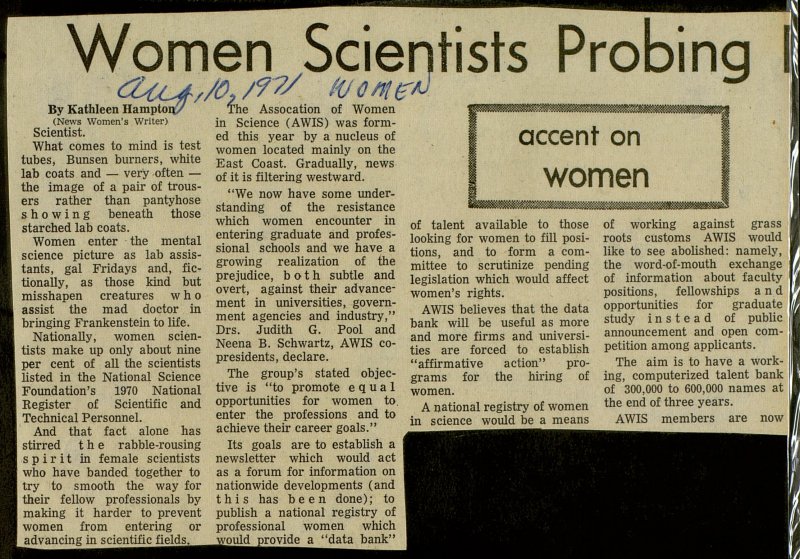 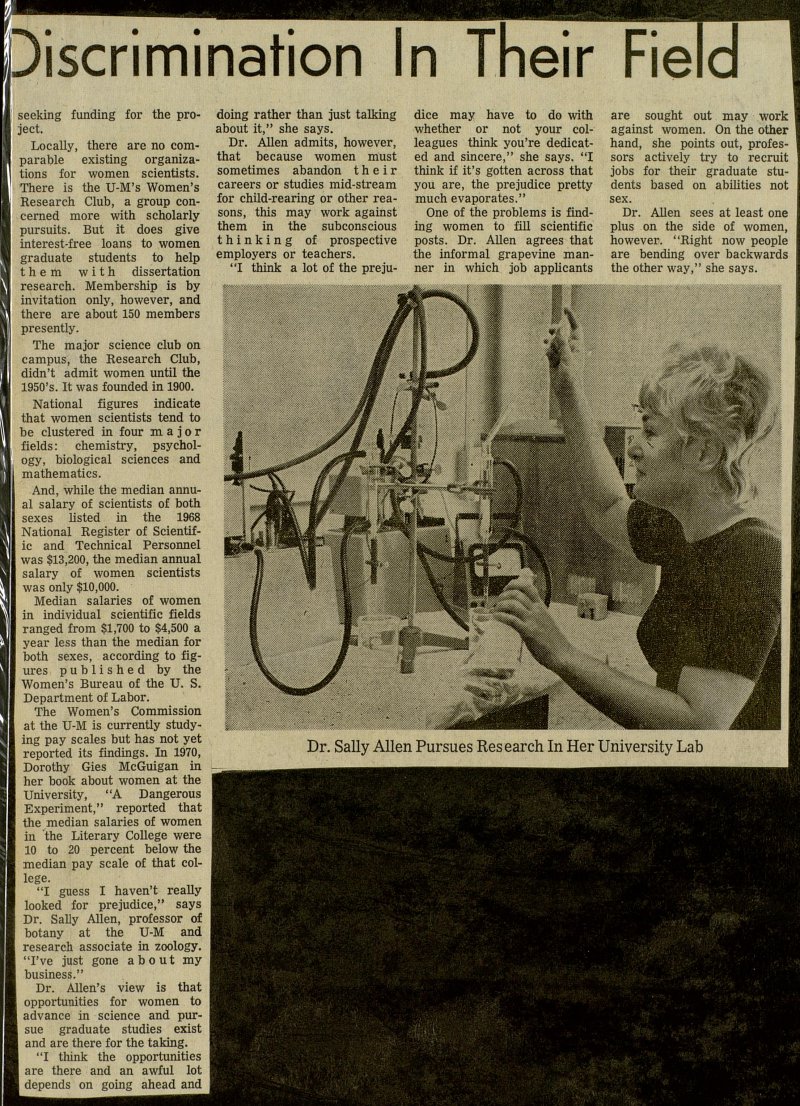 Scientist. What comes to mind is test tubes, Bunsen burners, white lab coats and - very often. - the image of a pair of trousers rather than pantyhose I s h o w i n g beneath those I starched lab coats. Women enter the mental I science picture as lab assisI tants, gal Fridays and, ficI tionally, as those kind but I misshapen creatures w h o I assist the mad doctor in I bringing Frankenstein to life. Nationally, women scientists make up only about nine per cent of all the scientists listed in the National Science I Foundation's 1970 National Register of Scientific and I Technical Personnel. And that fact alone has ■ stirred the rabble-rousing ■ spirit in female scientists ■ who have banded together to ■ try to smooth the way for I their fellow professionals by I making it harder to prevent I women from entering or I advancing in scientific fields;__ The Association of Women in Science (AWIS) was formed this year by a nucleus of women located mainly on the East Coast. Gradually, news of it is filtering westward. "We now have some understanding of the resistance which women encounter in entering graduate and professional schools and we have a growing realization of the prejudice, both subtle and overt, against their advancement in universities, government agencies and industry," Drs. Judith G. Pool and Neena B. Schwartz, AWIS copresidents, declare. The group's stated objective is "to promote equal opportunities for women to. enter the professions and to achieve their career goals." lts goals are to establish a newsletter which would act as a forum for information on nationwide developments (and this has been done); to publish a national registry of professional women which would provide a "data bank' ' of talent available to those looking for women to fill positions, and to form a committee to scrutinize pending legislation which would affect women' s rights. AWIS believes that the data bank will be useful as more and more firms and universities are forced to establish "affirmative action" programs for the hiring of women. A national registry of women in science would be a means of working against grass roots customs AWIS would like to see abolished: namely, the word-of-mouth exchange of information about faculty positions, fellowships and opportunities for graduate study instead of public announcement and open competition among applicants. The aim is to have a working, computerized talent bank of 300,000 to 600,000 names at the end of three years. AWIS members are seeking funding for the project. Locally, there are no comparable existing organizations for women scientists. ' There is the U-M's Women's Research Club, a group concerned more with scholarly pursuits. But it does give interest-free loans to women graduate students to help ' them with dissertation research. Membership is by invitation only, however, and there are about 150 members presently. The major science club on campus, the Research Club, didn't admit women until the 1950's. It was founded in 1900. National figures indicate that women scientists tend to be clustered in four major fields: chemistry, psychology, biological sciences and mathematics. And, while the median annuaI salary of scientists of both I sexes listed in the 1968 National Register of Scientific ie and Technical Personnel was $13,200, the median annual salary of women scientists I was only $10,000. Median salaries of women in individual scientific fields ranged from $1,700 to $4,500 a year less than the median for I both sexes, according to figures published by the Women's Bureau of the U. S. I Department of Labor. The Women's Commission at the U-M is currently studying pay scales but has not yet I reported its findings. In 1970, Dorothy Gies McGuigan in I her book about women at the University, "A Dangerous I Experiment," reported that I the median salaries of women I in the Literary College were 10 to 20 percent below the median pay scale of that colIlege. "I guess I haven't really I looked for prejudice," says I Dr. Sally Allen, professor of I botany at the U-M and I research associate in zoology. I've just gone about my business." Dr. Allen's view is that opportunities for women to advance in science and pursue graduate studies exist I and are there for the taking. "I think the opportunities I are there and an awful lot depends on going ahead and m doing rather than just talking about it," she says. Dr. Allen admits, however, that because women must sometimes abandon their careers or studies mid-stream for child-rearing or other reasons, this may work against them in the subconscious thinking of prospective employers or teachers. "I think a lot of the pre dice may have to do with whether or not your colleagues think you're dedicated and sincere," she says. "I think if it's gotten across that you are, the prejudice pretty much evaporates." One of the problems is finding women to fill scientific posts. Dr. Alien agrees that the informal grapevine manner in which job applicants are sought out may work against women. On the other hand, she points out, professors actively try to recruit jobs for their graduate students based on abilities not sex. Dr. Allen sees at least one plus on the side of women, however. "Right now people are bending over backwards the other way," she says.