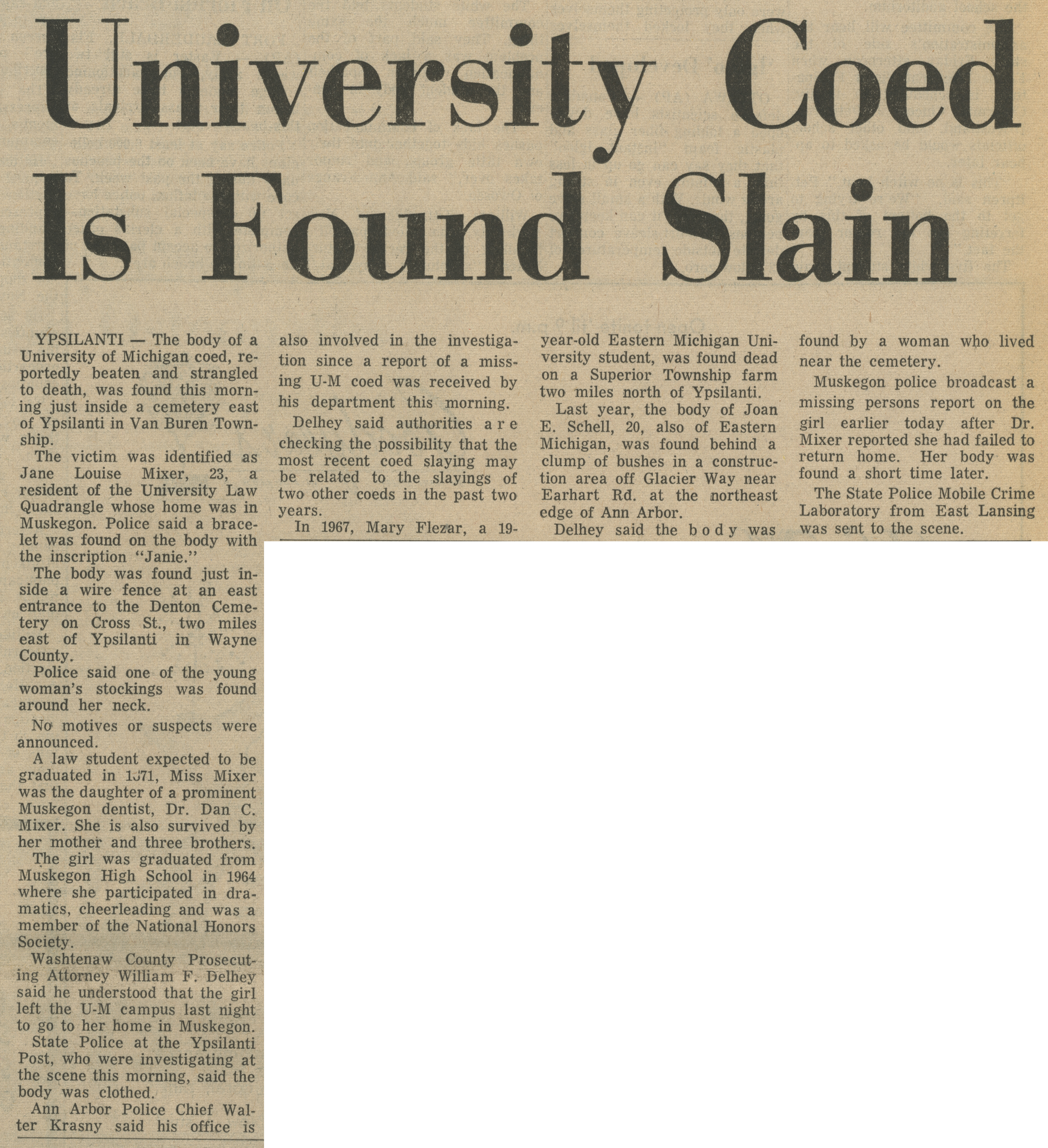 YPSILANTI — The body of a University of Michigan coed, reportedly beaten and strangled to death, was found this morning just inside a cemetery east of Ypsilanti in Van Buren Township.

The victim was identified as Jane Louise Mixer, 23, a resident of the University Law Quadrangle whose home was in Muskegon. Police said a bracelet was found on the body with the inscription "Janie."

The body was found just inside a wire fence at an east entrance to the Denton Cemetery on Cross St., two miles east of Ypsilanti in Wayne County.

Police said one of the young woman's stockings was found around her neck.

No motives or suspects were announced.

A law student expected to be graduated in 1971, Miss Mixer was the daughter of a prominent Muskegon dentist, Dr. Dan C. Mixer. She is also survived by her mother and three brothers.

The girl was graduated from Muskegon High School in 1964 where she participated in dramatics, cheerleading and was a member of the National Honors Society.

Washtenaw County Prosecuting Attorney William F. Delhey said he understood that the girl left the U-M campus last night to go to her home in Muskegon.

State Police at the Ypsilanti Post, who were investigating at the scene this morning, said the body was clothed.

Ann Arbor Police Chief Walter Krasny said his office is also involved in the investigation since a report of a missing U-M coed was received by his department this morning.

Delhey said authorities are checking the possibility that the most recent coed slaying may be related to the slayings of two other coeds in the past two years.

Last year, the body of Joan E. Schell, 20, also of Eastern Michigan, was found behind a clump of bushes in a construction area off Glacier Way near Earhart Rd. at the northeast edge of Ann Arbor.

Delhey said the body was found by a woman who lived near the cemetery.

Muskegon police broadcast a missing persons report on the girl earlier today after Dr. Mixer reported she had failed to arrive home. Her body was found a short time later.

The State Police Mobile Crime Laboratory from East Lansing was sent to the scene.