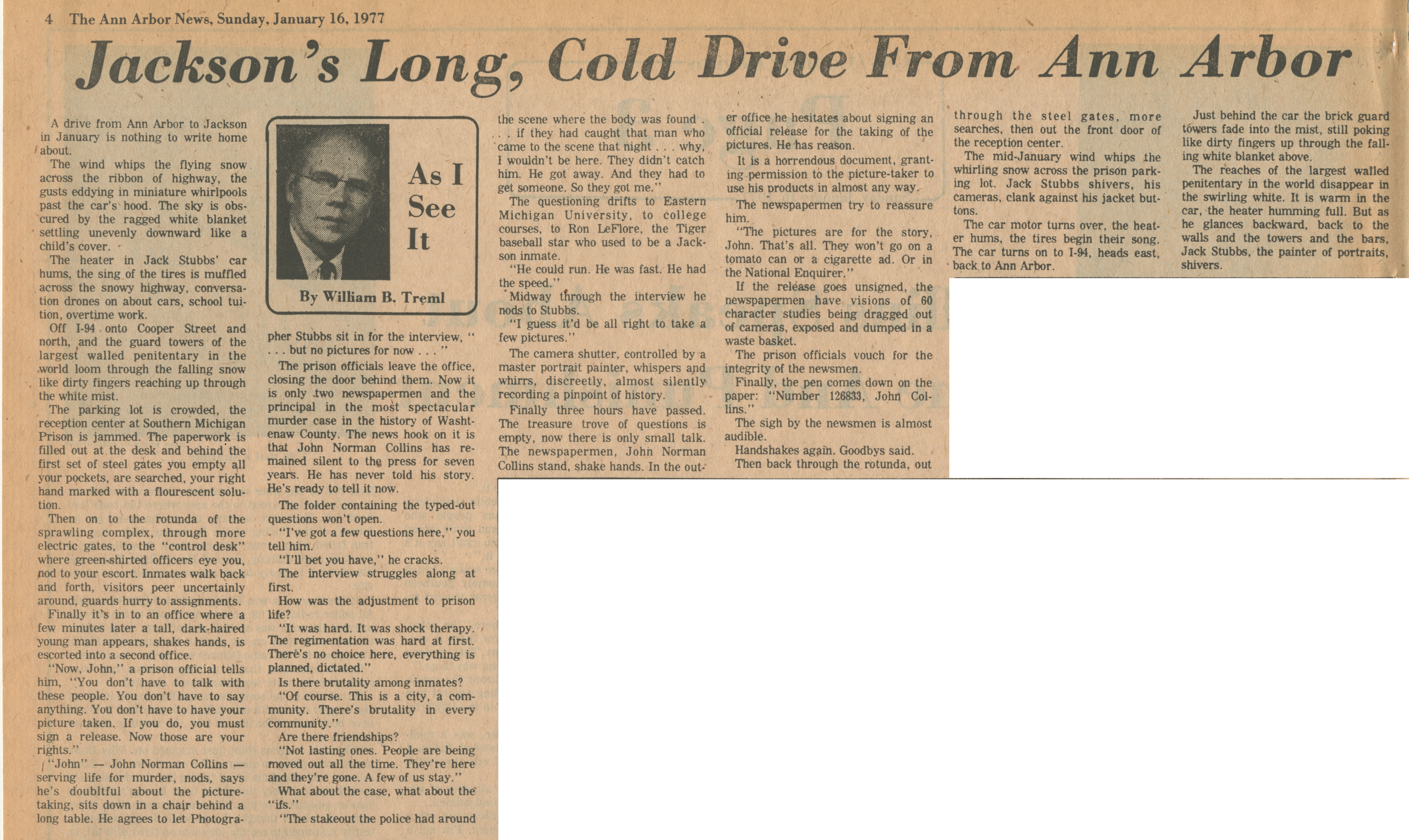 'A drive from Ann Arbor lo Jackson
in January is nothing to write home
'about.

The wind whips the flying snow
across the ribbon of highway, the
gusts eddying in miniature whirlpools
past the car's hood. The sky is obs-
cured by the ragged white blanket
settling unevenly downward like a
child's cover. '

The heater in Jack Stubbs' car
hums, the sing of the tires is muffled
, across the snowy highway, conversa-
tion drones on about cars, school tui-
tion, overtime work.

Off 1-94 onto Cooper Street and
north, and the guard towers of the
largest walled penitentary in the
-world loom through the falling snow
, like dirty fingers reaching up through
the white mist.

The parking lot is crowded, the
reception center at Southern Michigan
Prison is jammed. The paperwork is
filled out at the desk and behind the
first set of steel gates you empty all
/ your pockets, are searched, your right
hand marked with a flourescent solu-
tion.

Then on to the i 'i f the
sprawling complex. 11.1 •••ui^i. i.i.,ii.
electric gates, to the "control desk"
where green-shirted officers eye you,
pod to your escort. Inmates walk back
and forth, visitors peer uncertainly
around, guards hurry to assignments.

Finally it's in to an office where a
few minutes later a tall, dark-haired
young man appe: '';ikes hands, is
escorted into a s> . fice.

; "John" — John Norman Collins —-
serving life for murder, nods. says
he's doubltful about the picture-
taking, sits down in a chafr behind a
long table. He agrees to let Photogra-

The prison officials leave the office,
closing the door behind them. Now it
is only ,two newspapermen and the
principal in the most spectacular
murder case in the history of Washt-
enaw County. The news hook on it is
that John Norman Collins has re-
mained silent to the press for seven
years. He has never told his story.
He's ready to tell it now.

"I've got a few questions here." you
tell him.

The interview struggles along at
first.

How was the adjustment to prison
life?

"It was hard. It was shock therapy.
The regimentation was hard at first.
There's no choice here, everything is
planned, dictated."

Is there brutality among inmates?

"Of course. This is a city, a com-
munity. There's brutality in every
community."

"Not lasting ones. People are being
moved out all the time. They're here
and they're gone. A few of us stay."

"The stakeout the police had around

The questioning drifts to Eastern
Michigan University, to college
courses, to Ron LeFlore, the Tiger
baseball star who used to be a Jack-
son inmate.

'Midway through the interview he
nods to Stubbs.

"I guess it'd be all right to take a
few pictures."

The treasure trove of questions is
empty, now there is only small talk.
The newspapermen, John Norman
Collins stand, shake hands. In the out-
er office he hesitates about signing an
official release for the taking of the
pictures. He-has reason.

It is a horrendous document, grant-
ing permission to the picture-taker to
use his nroducts in almost any way.

The newspapermen try to reass ;•
him.

"The pictures are for the story,
John. That's all. They won't go on a
tomato can or a cigarette ad. Or in
the National Enquirer."

If the release goes unsigned, the
newspapermen have visions of 60
character studies being dragged out
of cameras, exposed and dumped in a
waste basket.

The prison officials vouch for the
integrity of the newsmen.

The sigh by the newsmen is almost
audible.

Then back through the rotunda, out

through the steel gates, more
searches, then out the front door of
the reception center.

The mid-January wind whips the
whirling snow across the prison park-
ing lot. Jack Stubbs shivers, his
cameras, clank against his jacket but-
tons.

The car motor turns over, the heat-
er hums, the tires begin their song.
The car turns on to 1-94, heads east,
' back to Ann Arbor.

Just behind the car the brick guard
towers fade into the mist, still poking
like dirty fingers up through the fall-
ing white blanket above.

The reaches of the largest walled
penitentary in the world disappear in
the swirling white. It is warm in the
car, the heater humming full. But as
he glances backward, back to the
walls and the towers and the bars,
Jack Stubbs, the painter of portraits.
shivers. ,.