Who Gave Murder Victim a Ride? 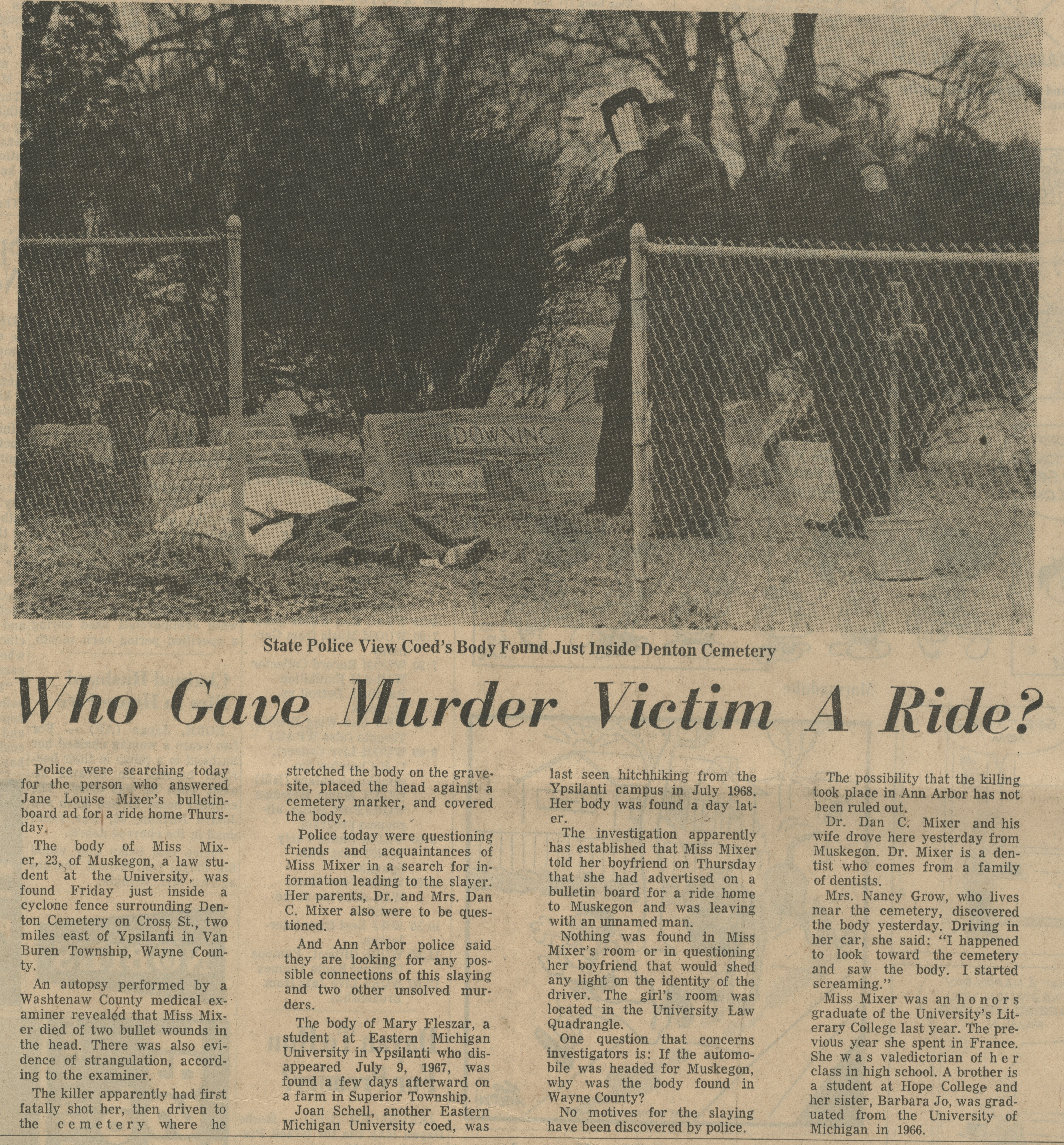 Who Gave Murder Victim A Ride?

Police were searching today for the person who answered Jane Louise Mixer's bulletin-board ad for a ride home Thursday.

The body of Miss Mixer, 23, of Muskegon, a law student at the University, was found Friday just inside a cyclone fence surrounding Denton Cemetery on Cross St., two miles east of Ypsilanti in Van Buren Township, Wayne County.

An autopsy performed by a Washtenaw County medical examiner revealed that Miss Mixer died of two bullet wounds in the head. There was also evidence of strangulation, according to the examiner.

The killer apparently had first fatally shot her, then driven to the cemetery where he stretched the body on the grave site, placed the head against a cemetery marker, and covered the body.

Police today were questioning friends and acquaintances of Miss Mixer in a search for information leading to the slayer. Her parents, Dr. and Mrs. Dan C. Mixer also were to be questioned.

And Ann Arbor police said they are looking for any possible connections of this slaying and two other unsolved murders.

The body of Mary Fleszar, a student at Eastern Michigan University in Ypsilanti who disappeared July 9, 1967, was found a few days afterward on a farm in Superior Township.

Joan Schell, another Eastern Michigan University coed, was last seen hitchhiking from the Ypsilanti campus in July 1968. Her body was found a day later.

The investigation apparently has established that Miss Mixer told her boyfriend on Thursday that she had advertised on a bulletin board for a ride home to Muskegon and was leaving with an unnamed man.

Nothing was found in Miss Mixer's room or in questioning her boyfriend that would shed any light on the identity of the driver. The girl's room was located in the University Law Quadrangle.

One question that concerns investigators is: If the automobile was headed for Muskegon, why was the body found in Wayne County?

No motives for the slaying have been discovered by police.

The possibility that the killing took place in Ann Arbor has not been ruled out.

Dr. Dan C. Mixer and his wife drove here yesterday from Muskegon. Dr. Mixer is a dentist who comes from a family of dentists.

Mrs. Nancy Grow, who lives near the cemetery, discovered the body yesterday. Driving in her car, she said: "I happened to look toward the cemetery and saw the body. I started screaming."

Miss Mixer was an honors graduate of the University's Literary College last year. The previous year she spent in France. She was valedictorian of her class in high school. A brother is a student at Hope College and her sister, Barbara Jo, was graduated from the University of Michigan in 1966.