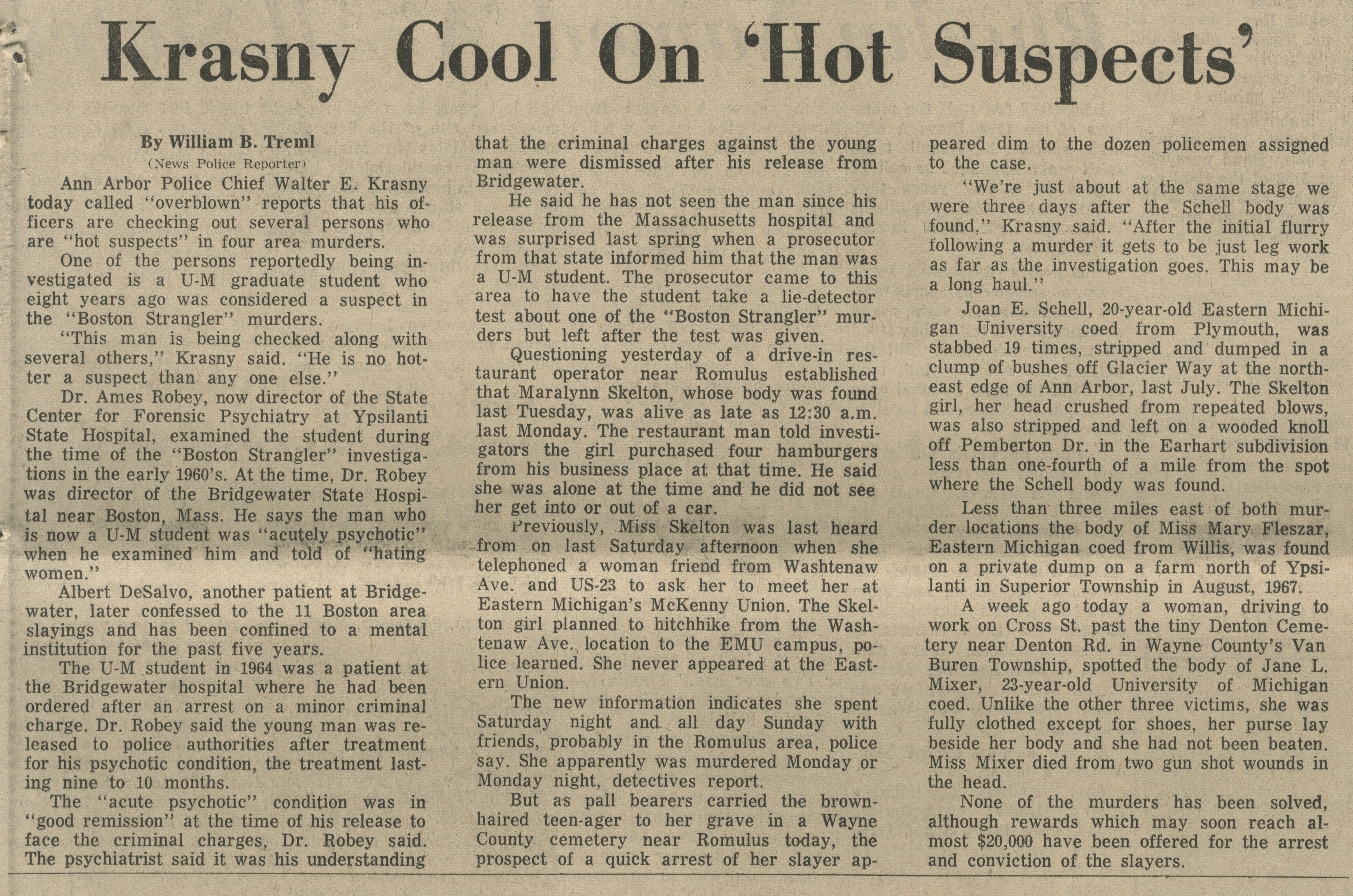 One of the , ~ reportedly being in-
vestigated is a U-M graduate student who
eight years ago was considered a suspect in
the "Bostor "'. iii^ler" murders.

"This being checked along with
several others, Krasny said. "He is no hot-
ter a suspect than any one else."

Dr. Ames Robey, now director of the State
Center for Forensic Psychiatry at Ypsilanti
State Hospital, examined the student during
the time of the "Boston Strangler" investiga-
tions in the early 1960's. At the time, Dr. Robey
was director of the Bridgewater State Hospi-
tal near Boston, Mass. He says the man who
is now a U-M student was "acutely psychotic"
when he examined him and told of "hating
women."

Albert DeSalvo, another patient at Bridge-
water, later confessed to the 11 Boston area
slayings and has been confined to a mental
institution for the past five years.

The U-M student in 1964 was a patient at
the Bridgewater hospital where he had been
ordered after an arrest on a minor criminal
charge. Dr. Robey said the young man was re-
leased to police authorities after treatment
for his psychotic condition, the treatment last-
ing nine to 10 months.

The "acute psychotic" condition was in
"good remission" at the time of his release to
ire the criminal charges. Dr. Robey said.
he psychiatrist said it was his understanding

that the criminal charges against the young
man were dismissed after his release from
Bridgewater.

He said he has not seen the man since his
release from the Massachusetts hospital and
was surprised last spring when a prosecutor
from that state informed him that the man was
a U-M student. The prosecutor came to this
area to have the student take a lie-detector
test about one of the "Boston Strangler" mur-
ders but left after the test was given.

Questioning yesterday of a drive-in res-
taurant operator near Romulus established
that Maralynn Skelton, whose body was found
last Tuesday, was alive as late as 12:30 a.m.
last Monday. The restaurant man told investi-
gators the girl purchased four hamburgers
from his business place at that time. He said
she was alone at the time and he did not see
her get into or ""t "c a car.

i-'reviousl;- Skelton was last heard
from on last ^at,urday afternoon when she
telephoned a woman friend from Washtenaw
Ave. and US-23 to ask her to meet her at
East- 'ligan's McKenny Union. The Skel-
ton g'.- ^. lined to hitchhike from the Wash-
tenaw Ave. location to the EMU campus, po-
lice learned. She never appeared at the East-
ern Union.

The new information indicates she spent
Saturday night and all day Sunday with
friends, probably in the Romulus area, police
say. She apparently was murdered Monday or
Monday night, detectives report.

But as pall bearers carried the brown-
haired teen-ager to her grave in a Wayne
County cemetery near Romulus today, the
prospect of a quick arrest of her slayer ap-
peared dim to the dozen policemen assigned
to the case.

"We're just about at the same stage we
were three days after the Schell body was
found," Krasny said. "After the initial flurry
following a murder it gets to leg work
as far as the investigation §(H^. i.';^ may be
a long haul."

Joan E. Schell, 20-year-old Eastern Michi-
gan University coed from Plymouth, was
stabbed 19 times, stripped and dumped in a
clump of bushes off Glacier Way at the north-
east edge of Ann Arbor, last July. The Skelton
girl, her head crushed from repeated blows,
was also stripped and left on a wooded knoll
off Pemberton Dr. in the Earhart subdivision
less than one-fourth of a mile from the spot
where the Schell body was found.

Less than three miles east of both mur-
der locations the body of Miss Mary Fleszar,
Eastern Michigan coed from Willis, was found
on a private dump on a farm north of Ypsi-
lanti in Superior Township in August, 1967.

A week ago today a woman, driving to
work on Cross St. past the tiny Denton Ceme-
tery near Denton Rd. in Wayne County's Van
Buren Township, spotted the body of Jane L.
Mixer, 23-year-old University of Michigan
coed. Unlike the other three victims, she was
fully clothed except for shoes, her purse lay
beside her hnrlv ;ind she had not been beaten.
Miss Mixer »m two gun shot wounds in
the head.

None of the murders has been solved,
although rewards which may soon reach al-
most $20,000 have been offered for the arrest
and conviction of the slayers.