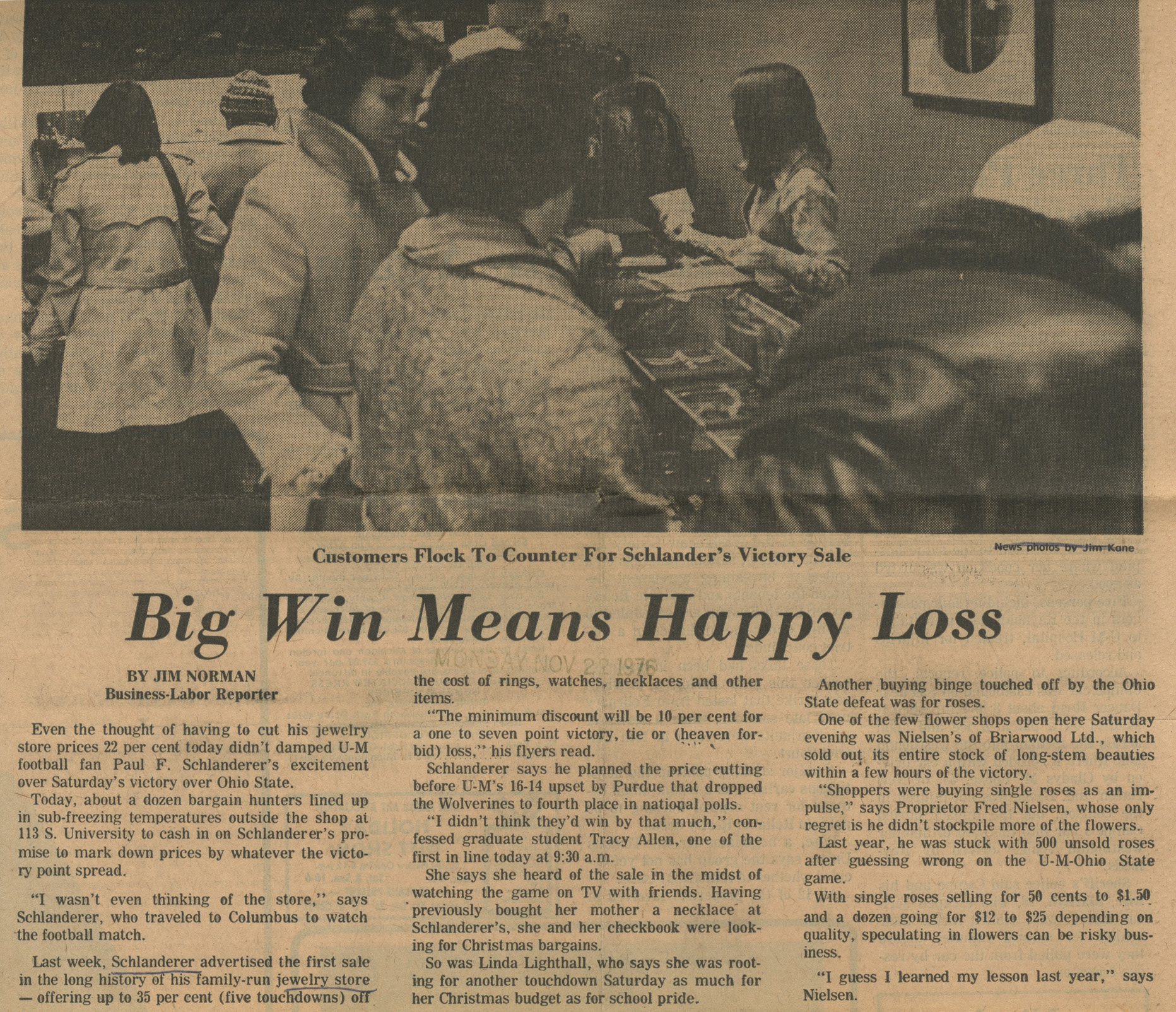 Even the thought of having to cut his jewelry store prices 22 per cent today didn't damped U-M football fan Paul F. Schlanderer's excitement over Saturday's victory over Ohio State.

Today, about a dozen bargain hunters lined up in sub-freezing temperatures outside the shop at 113 S. University to cash in on Schlanderer's promise to mark down prices by whatever the victory point spread.

"I wasn't even thinking of the store," says Schlanderer, who traveled to Columbus to watch the football match.

Last week, Schlanderer advertised the first sale in the long history of his family-run jewelry store- offering up to 35 per cent (five touchdowns) off the cost of rings, watches, necklaces and other items.

"The minimum discount will be 10 per cent for a one to seven point victory, tie or (heaven forbid) loss," his flyers read.

Schlanderer says he planned the price cutting before U-M's 16-14 upset by Purdue that dropped the Wolverines to fourth place in national polls.

"I didn't think they'd win by that much," confessed graduate student Tracy Allen, one of the first in line today at 9:30 a.m.

She says she heard of the sale in the midst of watching the game on TV with friends.  Having previously bought her mother a necklace at Schlanderer's, she and her checkbook were looking for Christmas bargains.

So was Linda Lighthall, who says she was rooting for another touchdown Saturday as much for her Christmas budget as for school pride.

Another buying binge touched off by the Ohio State defeat was for roses.

One of the few flower shops open here Saturday evening was Nielsen's of Briarwood Ltd., which sold out its entire stock of long-stem beauties within a few hours of the victory.

"Shoppers were buying single roses as an impulse," says Proprietor Fred Nielsen, whose only regret is that he didn't stockpile more of the flowers.

Last year, he was stuck with 500 unsold roses after guessing wrong on the U-M-Ohio State game.

With single roses selling for 50 cents to $1.50 and a dozen going for $12 to $25 depending on quality, speculating on flowers can be risky business.

"I guess I learned my lesson last year," says Nielsen.