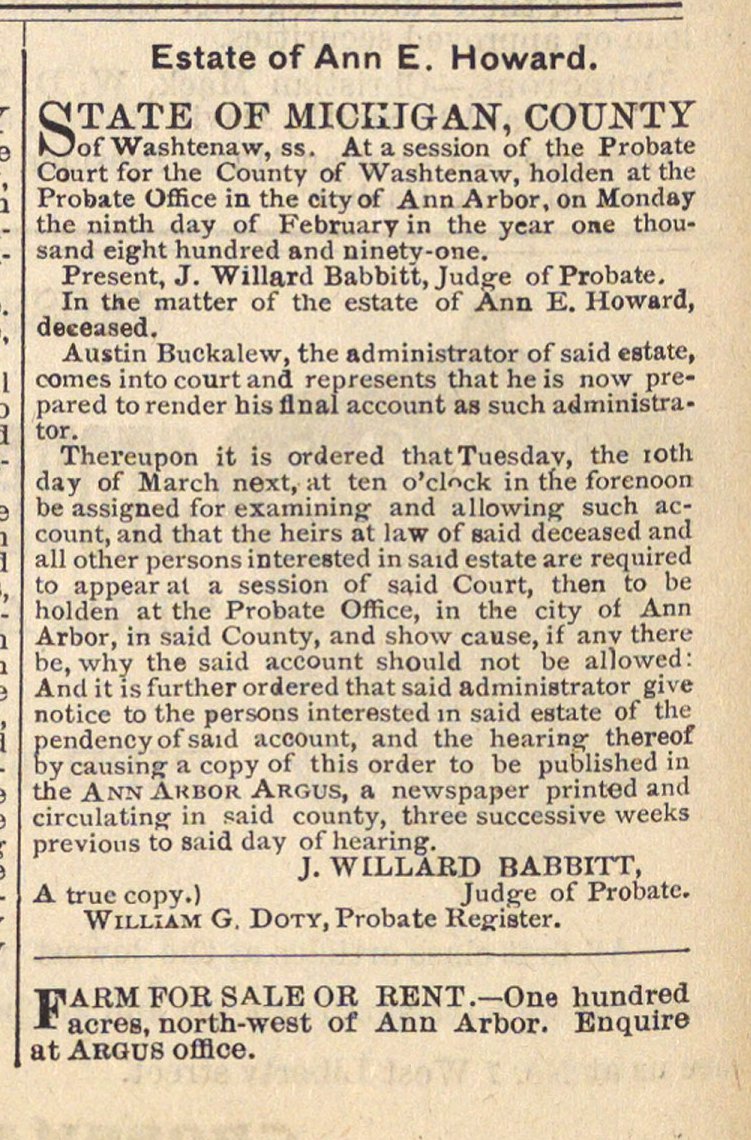 Estáte of Ann E. Howard. STATE OF MICHIGAN, COUJSTTY of Washtenaw, ss. At a session of the Probate Court for the County of Washtenaw, holden at the Probate Office in the city of Ann Arbor, on Monday the ninth day of February in the ycar one thousand eight hundred and oinetv-one. Present, J. Willard Babbitt, Jude of Probate. In the matter of the estáte of Ann E. Howard, deceased. Austin BuCkalew, the ndministrator of said catate, comes into court and represents that he is now prepared to render his final account as such administra tor. Thereupon it is ordered thatTuesdav, the lOth day of March next, at ten o'clck in tfie forenoon be assigned for examinin and allowing such account, and that the heirs at law of said deceased and all other persons intcrested in said estáte are required to appear al a session of said Court, then to be holden at the Probate Office, in the city of Ann Arbor, in said County, and show cause, if anv there be, why the said account should not be allowed: And it Ís further ordered that said adminietrator give noticc to the persons interested in said estáte of the pendencyof said account, and the hearing thereof by causing a copy of this order to be published in the Ann Akbok Argus, a newspaper printed and circulatins" in said county, three successive weeks previons to said day of hearing. j. WILLARD BABBITT, A truc copy.) Judg-e of Probate. Willzam G. Doty, Probate Register. FARM FOR SALE OR RENT.- One hundred acres, north-west of Ann Arbor. Enquirö at Aroub office.