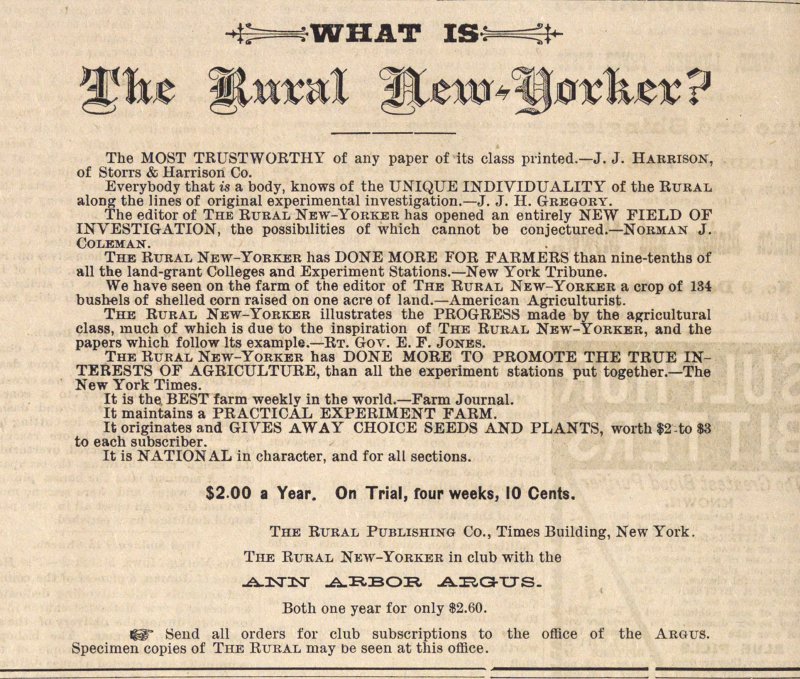 1=WHAT Igfr=3' The MOST TRUSTWORTHY of any paper of its class printed.- J. J. Hakrison, of Storrs & Harrison Co. Everybody that is a body, knows of the UNIQUE INDIVIDUALITY of the Rukal along the lines of original experimental investigation.- J. J. H. Gbegoky. The editor of The Rural New-Yorker has opened an entirely NEW FIELD OF INVESTIGATION, the possibilities of which cannot be conjectured. - Norman J. COLEMAN. The Rural New-Yorker has DONE MORE FOR FARMERS than nine-tenths of all the land-grant Colleges and Experiment Stations. - New York Tribune. We have seen on the farm of the editor of The Rural New-Yorker a erop of 184 bushels of shelled corn raised on one acre of land. - American Agriculturist. The Rural New-Yorker illustrates the PROGRESS made by the agricultural class, much of which is due to the inspiration of The Rural New-Yorker, and the papers which follow lts example. - Rt. Gov. E. F. Jones. The Rural New-Yorker has DONE MORE TO PROMOTE THE TRÜE INTERESTS OF AGRICULTURE, than all the experiment stations put together.- The New York Times. It is the, BEST farm weekly in the world. - Farm Journal. It maintains a PRACTICAL EXPERIMENT FARM. It originates and GIVES AWAY CHOICE SEEDS AND PLANTS, worth $2 -to $3 to each subscriber. It is NATIONAL in character, and for all sections. $2.00 a Year. On Trial, Tour weeks, 10 Cents. The Rural Publishing Co., Times Building, New York. The Rural New-Yorker in club with the Both one year for only $2.60. Send all orders for club subscriptions to the office of the Argus. Specimen copies of The Rural may be seen at this office.