Hayden, a former student at U-M was in Ann Arbor because U-M has recently purchased papers, photos and documents which detail his life as an activist. He stated that "history repeats itself if all parties aren't involved, even dissenters," in creating the future. He will be visiting the area once a year for 4-5 years to decipher his hand-written notes accurately because they include so many primary sources.

MLive reporter Janet Miller wrote a detailed story on his lecture you can find here.

A Date Which Will Live In Infamy

No not that date.

Sept. 1, 2007 is the day that the lowly Mountaineers of Division I-AA Appalachian State came to Ann Arbor and laid low the mighty Wolverines of the University of Michigan, 34-32 in the home opener.

Ann Arbor News sportswriter John Heuser wrote: “It may be the biggest upset in college football history, a Division I-AA team from the foothills of North Carolina wrecked Michigan’s season opener and made national headlines, shocking the Wolverines in Michigan Stadium.” Until then, no Division I-AA team had defeated a ranked Division I-A opponent since the inception of I-AA in 1978.

Fans and football prognosticator alike were wondering, “What just happened.” Great things were expected the Maize and Blue, who entered the season ranked No. 5 in preseason polls. The game with Appalachian State was a charity match, to give the little guys some national exposure and give the home team an easy victory. UM star running back Mike Hart was stunned, “When you lose to a team like a Division I-AA team, how can you go for national championship in Division I.”

The News headline said it all, “One and done.”

Fans were livid, angry at coach Lloyd Carr. One fan, Cam Swift of Grand Rapids said, “They obviously didn’t prepare the kids for the game. I think it’s time for Lloyd to go. We’ve had too many disappointments under him.” One fan quipped. “Lloyd Carr is an inspiration to me and many other Ohio State fans.” Jim Carty also opined in his column that Carr was losing his touch as a coach. Despite the final score, Mike Hart had an excellent game. After missing most of the second quarter with a bruised hip, he returned to run for 131 second-half yards and two touchdowns. He put his team ahead with a 54-yard run with 4:36 to play and finished with 188 yards and three touchdowns on 23 carries.

In Boone, N.C., Appalachian State students were dancing the streets. They grabbed a goalpost and dragged it down Main Street. One senior said, “This is my humble opinion: This is the biggest thing to happen in Boone.

News football writer John Heuser gave the team a failing report card with Fs in defense, coaching and overall. The next week, the LOSS was still the news when the Wolverines were about to face the Oregon Ducks and Ducks fans were quacking about their improved hopes for a victory. And what a victory it was. The Ducks added insult to injury by beating the Wolverines, 39-7.

This Saturday, UM plays the Mountaineers in another home opener. This time they hope it won’t be, in the immortal words of Yogi Berra, “déjà vu all over again.”

The Monuments Men, the movie with George Clooney and Matt Damon, was based on the book The Monuments Men : Allied heroes, Nazi thieves, and the greatest treasure hunt in history by Robert M. Edsel.

The real Monuments Men were a group of men and women from thirteen nations, most of them volunteers, who were museum directors, curators, art scholars and educators, artists, architects, and archivists. These mostly middle-aged family men, walked away from successful careers into the epicenter of the war, risking—and some losing—their lives. They raced against time in order to save the world’s greatest cultural treasures from destruction at the hands of Nazi regime.

Two of these brave men lived among us quietly for decades, one, Charles Sawyer was previously blogged about here, the second was Ralph Hammett.

Professor Hammett taught in the architecture department at U of M starting in 1931, with a hiatus to join the army in 1943, and retired from the University in 1965. His work as one of the Monuments Men and a noted architect will be forever remembered in Ann Arbor having designed some homes as well as buildings such as an addition to the Ann Arbor (then Women's) City Club on Washtenaw, the St. Andrew’s Episcopal Church parish hall and chapel, the Lloyd Douglas Memorial Chapel, and the Lutheran Student Center. He also designed the Abraham Lincoln Memorial in Springfield, Illinois. He was named “Architect of the Year” in 1957 by the Michigan Society of Architects. Hammett died in 1984. You can read Old News articles about him here. There is also an extensive website created by his grandson here.

Check out that newfangled voting machine! 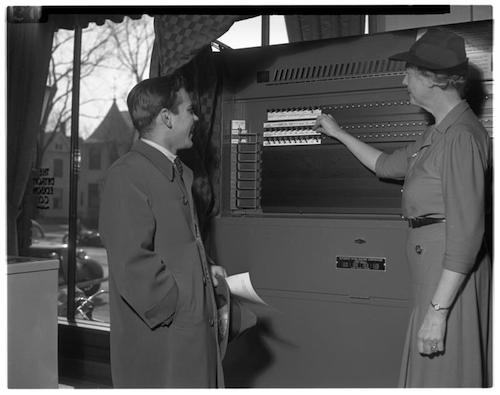 On your way to the voting booth today, consider what passed for cutting-edge voter technology in Tree Town back in March 1942.

Oldnews has over 200 articles and photos of past Elections in Ann Arbor and 160 that reference past Ann Arbor Mayors, including this one of former Mayor Cecil O. Creal taking the oath of office - with his left hand - 55 years ago.

As the Ann Arbor Art Fairs open today, you can learn a lot from AADL. Take a look at 50 Years of Originality: A History of the Ann Arbor Street Art Fair, a digital collection which includes over 100 images, plus audio recollections and videos. And if you’re interested in viewing past fair posters from our Art Print Collection, click here.

A Community for Victory - Ann Arbor in World War Two

AADL is pleased to partner with the University of Michigan Stephen S. Clark Library to explore community life in Ann Arbor during World War Two. "A Community for Victory - Ann Arbor in World War Two", which will be on display May 1-August 1 on the 2nd floor of the Hatcher Graduate Library, makes use of AADL’s local historical archives, the Clark Library's map collection, and special materials from the the American Culinary History Collection.

AADL is pleased to have partnered with the University Musical Society to help build UMS Rewind, a searchable database of performances, programs, and photographs from 135 years of UMS history.

Open to all researchers, this unique research tool is available for searching by composer or composition, conductor or performer, and provides access to repertoire, programs, and other material detailing the unique legacy of UMS and the history of touring in the performance arts in America.

Databases for the History Buff

A click on the aadl.org Research tab at the top of the page will introduce you to a wealth of databases covering such subjects as Car Repair, Literature, and Investing.

For those with a history interest, the databases are especially rich.

Start at the History and Biography Page and go from there. You'll find local history aadl.org-hosted sites like Ann Arbor Observer: Then & Now, Freeing John Sinclair, and Old News. An exploration of Other Sites reveals a yield so diverse, you can find, within minutes, the legend of the Birth of Hatshepsut, National Security discussions between Henry Kissinger and President Gerald Ford, a transcript of the 1783 Treaty of Paris ending the Revolutionary War, and the actual scanned pages of the Brooklyn Daily Eagle from May 24, 1883 touting the Opening of the Brooklyn Bridge (click on "View" and then "View Item in PDF" to get the full article) along with the May 31, 1883 edition recording the subsequent, deadly Panic on the Bridge and much more.

The Newspaper section allows you to browse historical editions of the Ann Arbor News, New York Times, Wall Street Journal and others. If you know what you're looking for, you can easily track down such unusual items as the Washington Post's 1933 Obituary of Mrs. George A. Custer.

Let your love of history go wild and see what you can find.

AADL is a Community Partner at the Ann Arbor Film Festival

The 52nd Ann Arbor Film Festival is only days away and the Ann Arbor District Library is participating as a Community Partner for "Film Competition 5" featuring filmmakers ages 6 and up.

The screening takes place Saturday, March 29 at 11am at the Michigan Theater. Take a look at the list of films and if you enter this code - AAFF52_AADL - when buying online tickets, you will get 10% off the advance ticket price ($5 standard)!

The Ann Arbor Film Festival is the longest-running independent and experimental film festival in North America. The 52nd AAFF takes place March 25 - 30, 2014 and presents over 200 films, videos and performances from more than 20 countries with dozens of U.S., North American and world premieres.

I Remember When: a 1974 video series made during Ann Arbor's sesquicentennial celebrations

Just in time for Ann Arbor’s 190th anniversary, AADL is pleased to release - for the first time! - I Remember When, a seven-part video series made during the city's sesquicentennial celebrations in 1974 "to tell the story of the important events that have happened in Ann Arbor's 150-year-old history."

In the first show, host Ted Trost says, "...the entire series will be recorded on videotape so that future generations of Ann Arborites may see and hear what it was like, way back when in 1974 - the year Ann Arbor celebrated her sesquicentennial.” And today, 40 years later, all seven episodes are available at aadl.org/irw for streaming and downloading!

Following an overview in the first show, each episode focuses on a specific topic - from city politics, the business community and religion, to entertainment, music and theater, and Ann Arbor’s Greek and German communities - and features interviews with several prominent citizens from that era. Together these films provide a snapshot of our city at a unique time and place in its history.

I Remember When was sponsored by the (at that time) Ann Arbor Public Library, in conjunction with the Ann Arbor Sesquicentennial Commission, and produced by students in the University of Michigan’s Speech Department.