Every Thing Ought To Be Well Done 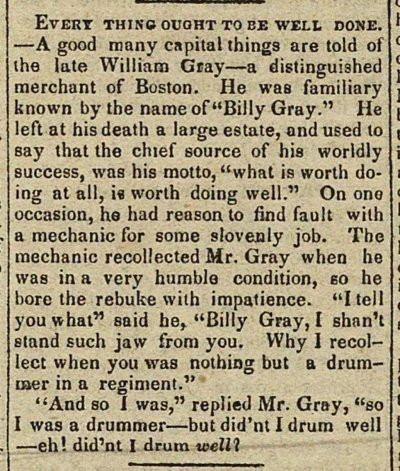 - A good many capital things are told of ihe late William Gray - a distinguished merchant of Boston. He was familiary known by the name of "Billy Gray." He left at his death a large estÃ¡te, and used to say that the chief source of his worldly success, was his motto, "what is worth doing at all, i worth doing well." On ono occasion, he had reasonto fÃ­nd fault wilh a mechanic for some slovenly job. The mechanic recoÃ¼ected Mr. Gray when he was in a very humble condition, eo he bore the rebuke with impatience. "Itell youwhat" said he "Billy Gray, I shan't stand such jaw from you. Why I recollect when you was nothiog but a drummer in a regiment." "And so I was," replied Mr. Gray, "so I was a drummer - but did'nt I drum well - eh! did'nt I drum welU