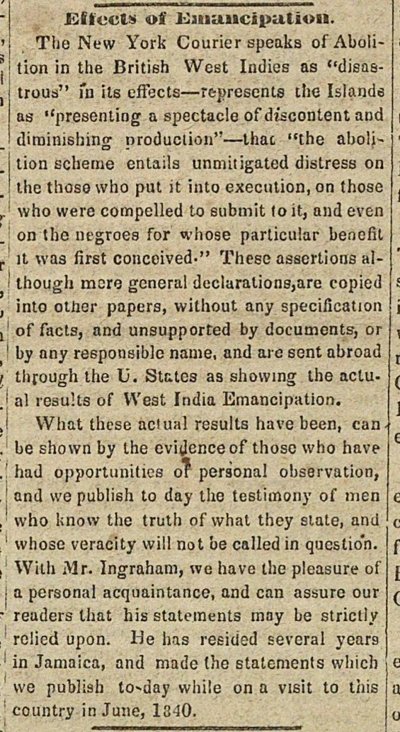 ! The New York Courier speaks ofAboli tion in the British West Indies as "disasi trouÃ¼" Ã­n is effects - representa the Islande as "presenting a spectacle of discontent and ' diminishing nroduclion" - that "the aboli tion scheme entails unmitigated distress on the thoso who put it into execution, on those 1 who vvere compelled to eubmit to it, and even on tbc negroes for whose particular benefit it was first conceived-" These assertions al' though mere general declarations,are copied into other papers, without any specification of iacts, and unsupported by documents, or by any responsible name, and aio sent abroad thfough the U. States as showing the actual resuHs of West India Emancipation. What these actual results have been, canbe shown by the evidenceof those who have had opportunitics or personal observation, and we publish to day the testimony of men who know the truth of what they state, and whose veracity will not 'oe called in questio'n. With Mr. Ingraham, we have the pleasure of a personal acqnaintance, and can assure our readers that his statements may be strictly relied upon. He has reeided several ycars in Jamaica, and made (He statements which we publish today while on a visit to this country in June, 13-40.