To The Abolitionists Of The County Of Wayne 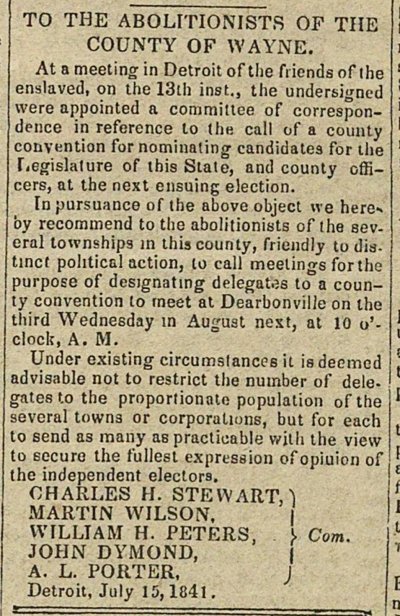 At a meeting in Detroit of the fiiends of the enslaved, on the 13th inst., the undersigned were appointed a committee of correspondcnce in reference to the cali of a county convention for nominating' candidatea for the F.egislature of this State, and county officers, at the next ensuing election. In pursuance of the above object we here by recommend to the abolitionists of (he several township3 in this county, friendly to j tinct political action, lo cali meelings forthe purpose of designating delÃ©gales to a county convention lo meet at Dearbonville on the third Wednesday in August nest, at 10 o'clock, A. M. Under existing circumslances it is decmed advisable not to restrict the number of delegatee to the proportionato population of the several towna or corporations, but for each to send as rnany as practicable vitli the view to secure the fullest expression of opiuiou of the independent electora.