Escape Of A Slave 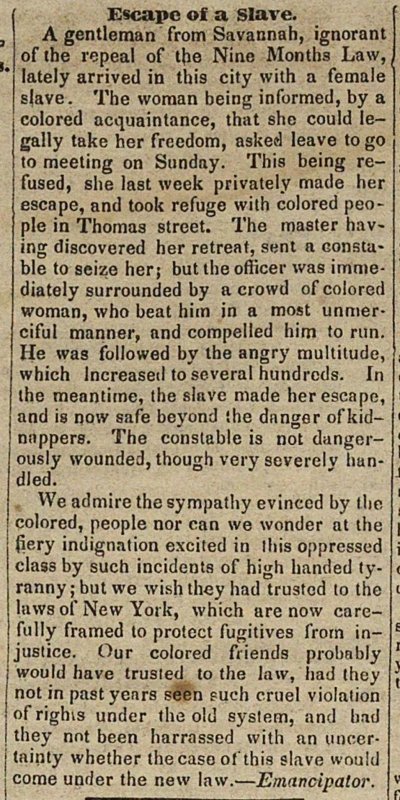 A gentleman from Savannah, ignorant of (be repeal of the Nine Months Law, lately arrived in this city with a female s{ave. The woman being informed, by a colored acquaintance, that she could legally take her frcedom, asked leave to go to meeting on Simdny. This being refused, she last week privately made her escape, and took refuge with colored peopie in Thomas street. The master having discovered her retreat, sent a Gonstable to seize her; but the oÃ±icer was imniediately surrounded by a crowd of colored woman, who beat him in a most unmerciful manner, and compelled him to run. He was foliowed by the angry multitude, which Increased toseveral hundrcds. In ihe meantime, the slm'e made her escape, and is now safe beyond ihe dnnger of kidnappers. The constable is not dangerously wounded, though very severely handled.. We admire the sympathy evinced by lbo colored, people nor can we wonder at the fiery indignation excited in lhis oppressed class by such incidents of high handed tyrannyjbut we wishthey had trustcd to the lnws of New York, which are now carefully framed to protect fugitives irorn injustice. Our coiored friends probnbjy would have trusled to the law, had they not in pastyenrs sÃ©en euch cruel violation ofrighvs under the old system, and had they nnt been harrassed with an uncertainty whether the caso oÃ­this slave would