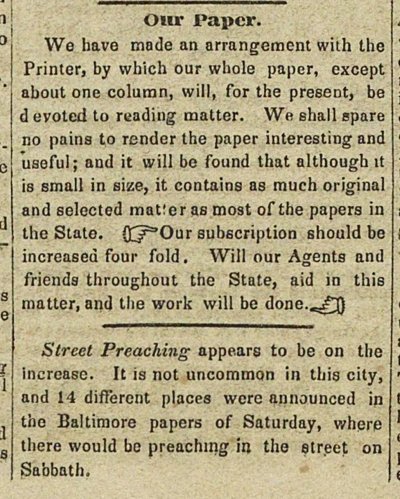 We have made an arrangement with the Printer, by which our whole paper, except about one column, will, for the present, be d evoted to raading matter. We ehall spare no pains to render the paper interesting and usoful; and it will be found that although it is small in si ze, it contains as much original and selected matter as most of the papers in the State. (XOur subecription should be increaseu four fold . Will our Agents and Iricnds throughout the State, aid in tliis matter, and the work will be doncjf} Street Preaching appears to be on the ncreasc. It is not uncommon in this city, and 14 different places were announced in the Baltimore papers of Saturday, where there would be preachmg in the etreet on Sabbath.