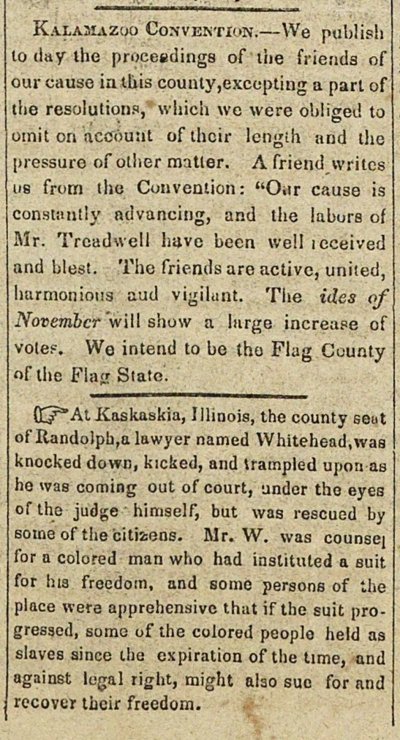 We publish today the proceedings of the friends of our cause in this county,excepting a part of the resolutions, which we were obliged to omit on account of their length and the pressure of other matter. A friend writes us from the Convention: "0ur cause is constantly advancing, and the labors of Mr. Treadwell have been well received and blest. The friends are active, united, harmonious and vigilant. The ides of November 'will show a large increase of votes. We intend to be the Flag County of the Flag State. At Kaskaskia, Illinois, the county seat of Randolph, a lawyer named Whitehead, was knocked down, kicked, and trampled upon as he was coming out of court, under the eyes of the judge himself, but was rescued by some of the citizens. Mr. W. was counsel for a colored man who had instituted a suit for his freedom, and some persons of the place were apprehensive that if the suit progressed, some of the colored people held as slaves since the expiration of the time, and against legal right, might also sue for and recover their freedom.