Life At The South 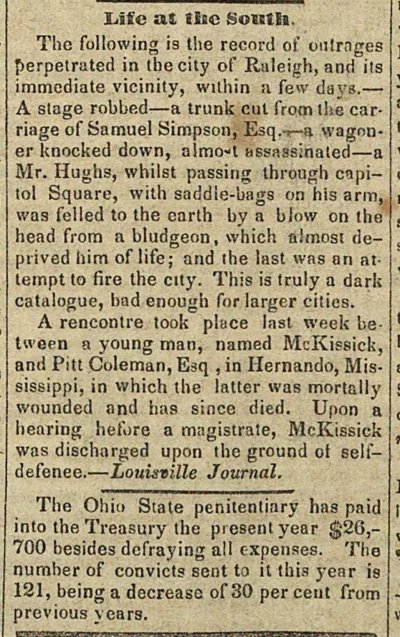 The following is the record of outrnges ferpetnited n the city of Ruleigh, and its mmcdiate vicinity, within v few days. - A stage robbed - a trunk cul from the carriage of Samuel Simpson, Esq.t-a vvagnner knocked down, almo-t assassinated - a Mr. Hughs, whilst passing through copitol Square, with saddle-bags on his arm, was felled to the carth by a blow on the head from a bludgeon, which Ã¼!most deprived him of life; and the last was an attempt to fire the city. This is truly a dark catalogue, bad enough for larger cities. A rencontre took place last week betwern a young man, named McKissick, and Pitt Coleman, Esq , in Hernando, Mississippi, in which the latter was mortally wounded ond iius since died. Upon a hearing hefore a magistrale, McKissick was discharged upon the ground otdefenee. - Louisville Journal. The Ohit State penitentjary has paic into the T reasury the present year $26,700 besides dcfraying all expenses. The number of convicts sent to it this year 9 121, being a decrease of 30 per cent from previous years.