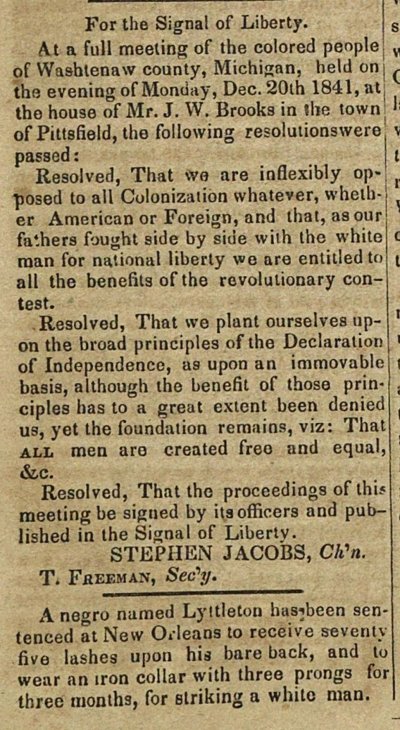 At a full meeling of the colored people of Washtenaw county, Michigan, held onj the eveningof MonÃ¼ay, Dec. 20th 1841, at; tho house of Mr. J. W. Brooks in the town: of Pittsfield, the following resolutionswere passed : Resolved, That we are inflexibly opposed to all Colonizaiion vvhatever, wheih-j er American or Foreign, and that, asour fathers fought side by side wiih the white man for naÃ¼onal liberty vo are entitled to all the benefits of the revolutionary contest. Resolved, That we plant ourselves upon the broad principies of the Declaration of Independence, as upon an immovablc basis, although the benefit of those principies has to a great extent been denied U9, yet the foundation remains, viz: That all men aro created freo and equal, &.C. Resolved, That the proceedings of th5 meeting be sigiied by itaofficers and published in the Signal of Liberty. STEPHEN JACOBS, CVn. T. Fbeeman, Sec'y. XnQoto numed Lyttleton hasbeen sentenced at New Orleans to receive seventy five lashes upon his bare back, and to wear an iron collar with three prongs for three tnonths, for Btriking a white man.