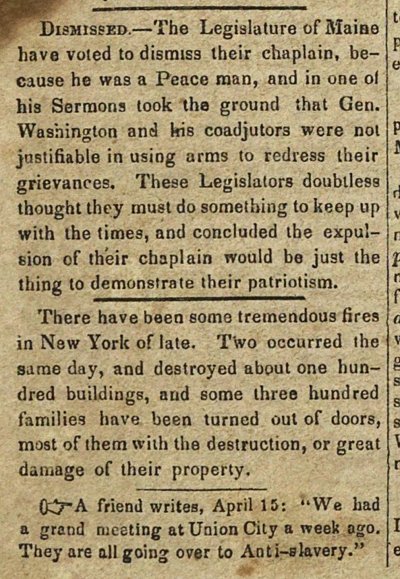 -The Legialature of Maioehave voted to dismiss their chaplain, because he was a Peace man, and in one ol his Serraons took the ground that Gen. Washington and kis coadjutors were not jastifiable in using arms to redress their grievances. These Legislators doubtless thought they must do something to keep up with the times, and concluded the expulsiÃ³n of their chaplain would be just the thing to demÃ³nstrate their patriotism. There have been some tremendous fires in New York of late. T'wo occurred the same day, and destroyed about one hundred buildings, and some three hundred families have been turned out of doors, most of them wiih the destruction, or great damage of their property. OrA friend writes, April 15: "We had a grand meeting at Union City a week ago. They are all going over to Anti-skvery."